Hazel Foerstner’s app will list vegetarian dishes in all local restaurants; hopes to launch by end of year. 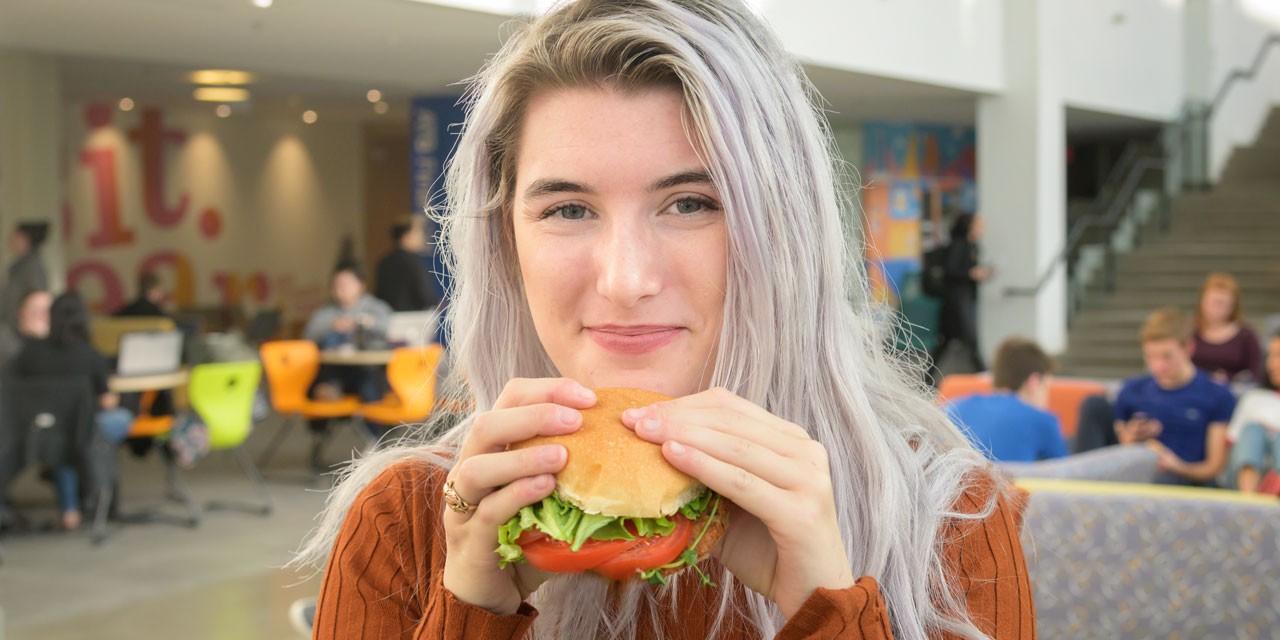 U of A arts student Hazel Foerstner, seen here eating a veggie burger, is developing Edibly, an app to help vegan and vegetarian diners find dishes at all local restaurants. She also hopes the app will be helpful to people trying to cut back on their meat consumption.

Some of the best business ideas are born out of hunger, literally.

While in Europe during the summer of 2017, Hazel Foerstner ate only potato chips for three straight days.

“I was starving,” said the lifelong vegetarian. “I thought there has to be a better way!”

When she returned home to Canada, she immediately set to work on her restaurant vegetarian dish review app—edibly.ca.

The fourth-year University of Alberta arts student majoring in economics said she’s not entrepreneurial, just passionate about helping the cause.

“I’ve been trying to go vegan [the strictest form of vegetarianism with no eggs or dairy] for over a year, but it’s really hard. If this app helps one family eat vegetarian once a week, I’ll be happy.”

Enter Edibly, which aims to make it much easier for vegetarians and vegans to find great dishes at all kinds of restaurants around the city.

“What Foerstner’s doing is more unique than listing vegetarian restaurants in the city, which most people know about,” said Craig Milne, owner of the Prairie Noodle Shop and executive-in-residence at TEC Edmonton.

In the competitive app market, making and maintaining that sense of community or vibrant, active hub will give Edibly an advantage, added Milne.

With little experience starting up businesses, Foerstner sought out TEC Edmonton, a business accelerator that helps transform technologies into business opportunities, to help her develop a business plan and connect with resources.

There’s no question of demand: Edibly has only a prototype in the works, but Foerstner has already been featured on several shows, including Canada AM.

“Forty to 50 per cent of Canadians are actively trying to reduce their meat consumption. And a small app like this can make a big difference,” said Foerstner.

As long as she gets it off the ground.

“Crowdsourcing has not been a viable option because our app is essentially free, so there isn’t much to entice bigger funders in terms of giveaways,” explained Foerstner. “I decided to do the development myself and expect to have it running by end of year.”

In the meantime, she’s also been building a database of vegan and vegetarian dishes, and a marketing plan to help spread word of her app.

“Restaurants really like it. It’s essentially free publicity, and if there is a bad review, unlike some situations where the restaurant is expected to pay a fee to remove the critical review, we give them a chance to revise their dish. And if the restaurant can show they are adding vegan dishes, they get a clean slate.”

Foerstner anticipates future revenue streams will come in one of two ways.

“So many people are trying to be vegan,” she said. “So many people want to go out and eat, and it’s tough to find options. Hopefully Edibly, by making it a little easier, will push a few people to vegetarian meals or cut back on meat, and that makes all the difference.”