Team behind province’s first space satellite recognized for opening up a new world of possibilities for Alberta children. 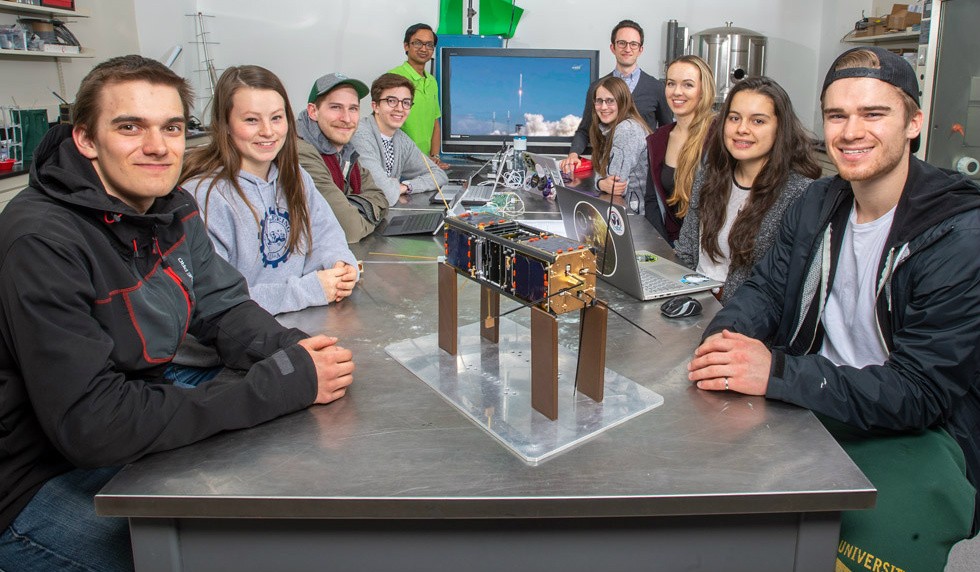 In the early morning hours of May 26, 2017, a group of University of Alberta space exploration buffs fulfilled their space dreams when the cube satellite they designed and built to track space weather launched from the International Space Station.

That small step was a giant leap for the dreams of starry-eyed Alberta grade-schoolers who now know the cosmos can be theirs.

“Growing up here, you may not think of Edmonton as a hub for space science engineering, but we showed kids that all you need to do is come to the University of Alberta to kickstart a career or volunteer activity where you access space,” said Callie Lissinna, mechanical engineering student and member of the satellite design team, AlbertaSat.

“It makes kids realize that this kind of career ambition is realistic for them, that there are people in their city that they can talk to right now about things that they may have imagined as out of reach.”

The spreading of AlbertaSat’s special brand of hope is why the group has been awarded the 2018 Community Leader Award as part of the U of A’s Community Connections Awards.

Charles Nokes, an engineering physics alumnus and one of the early architects of AlberaSat, said community outreach was a natural and early evolution of the team formed in 2010 with a goal to design, build and launch a satellite.

He said besides giving students the opportunity to participate in a true space mission and develop skills, one of the founding pillars of the project was to play a part in developing a space industry ecosystem so students from the U of A can have a place to apply their skills and knowledge here in Alberta after they graduate.

“We realized that perhaps our best audience, our most excited audience, was the children we met at events, sessions or when we ran a summer camp,” said Nokes.

“The educational outreach of the team did exist at that time, but that is where it found its core and developed into something impactful,” said Nokes.

It was still early days for AlbertaSat, but the outreach was soon outpacing the actual hardware. Nokes remembers the first time AlbertaSat participated in the Canadian Satellite Design Challenge in 2013.

“The team came in last, except we won the educational outreach category, so it’s always been important,” he said. “Now, there has been enough outreach and exposure, students come to the team knowing it exists.”

Lissinna was one of the students who was able to join AlbertaSat almost the second she stepped on campus. She mentioned on her application that she was interested in the educational outreach portion of the group because of her previous jobs with kids.

As education outreach lead, she ran dozens of school and summer camps engaging thousands of students, as well as public events. After a year in the role, she moved to the mechanical team to help with the hands-on engineering of the satellite.

“I noticed a huge lack of female role models in the group,” she said. “We all wanted AlbertaSat to be a champion of new policies and human resources procedures that can be introduced into an organization to help increase gender parity in STEM fields.”

In an attempt to even the playing field, AlbertaSat collected data about the gender, education and role in AlbertaSat of all past and present student members since the group’s inception. Results showed that from 2010 to mid-2017, only seven per cent of engineering leadership roles in AlbertaSat had been held by women, compared with 50 per cent in administrative leadership roles.

To rectify the disparity, AlbertaSat recruited from across campus to fill administrative and outreach roles so women in STEM could fill roles more closely related to their training. The group also documented the procedure for how teams were made to help combat unconscious bias in new member placements. A handbook is being written to ease the transition of new members to engineering teams.

Since implementing these three changes, the proportion of women in engineering leadership roles has increased to 42 per cent.

Lissinna also connected AlbertaSat with the U of A’s Women in Scholarship, Engineering, Science and Technology unit for the WISEST Choices conference for Grade 6 girls held every February.

“Having these women in leadership positions will provide role models for younger girls and for new members who join our group,” she said.

“In the future of space science, we see space no longer being the sole domain of very large organizations—it is going to be in the hands of the people.”