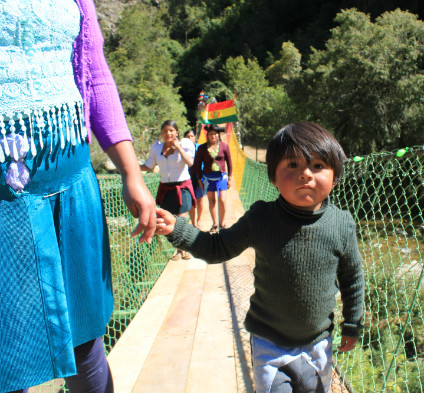 Build allows local children in remote community to get to school during rainy season. 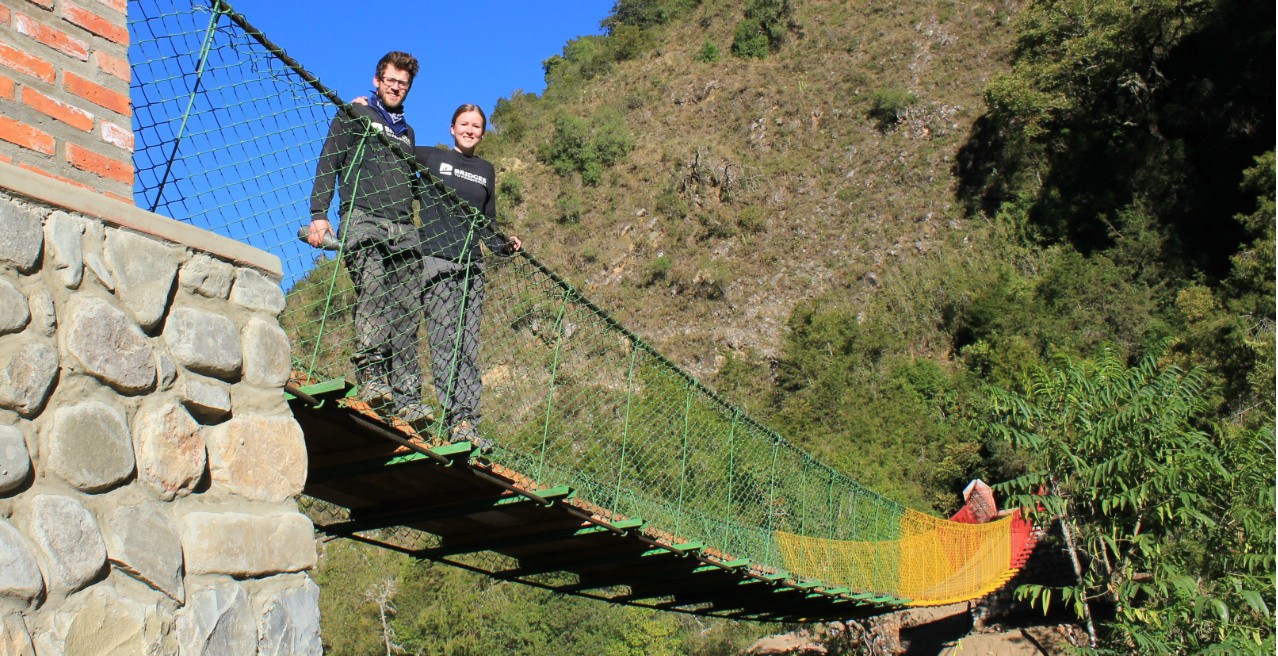 U of A students built a 39-metre suspension bridge in Chavarria, Bolivia, in just 26 days so local schoolchildren could get to class during the rainy season. (Photo courtesy Mabel Smith)

Children from a small community in Bolivia will be able to attend school during the rainy season, thanks to a group of University of Alberta students.

Eight engineering students built a 39-metre footbridge—the largest ever built by Bridges to Prosperity (B2P)—last May in the community of Chavarria as part of a project through the U of A chapter of B2P.

“The school was on one side of the river and farmland on the other. Children were usually being held back from school during rainy season; they wanted this bridge so children could go to school,” explained Mabel Smith, a fourth-year civil engineering co-op student and co-founder of the U of A B2P chapter.

“The river gets so high and fast during the rainy season it’s nearly impossible for a grown adult to cross safely on foot, let alone a child. So children just miss school because they physically can’t get there.”

Former B2P chapter president Mitchell Trollip, who was just finishing his mechanical engineering degree when he worked on the project, said seeing the river and environment first-hand demonstrated the need for a bridge.

“Seeing the river and the rain and understanding how little these people had and this was their only way to get to schools or hospitals or market, really showed how much this would benefit the community,” he said.

During the design phase, the engineering students worked out the calculations and created drawings of the bridge using AutoCAD software.

They also had access to other resources, including B2P’s bridge-builders’ manual, and two members of the team did a “tag along” with another team’s build to get hands-on experience. Once on site, an engineer or engineer in training was always present to help the students and oversee the build.

However, the project was not without its challenges.“The build site got switched at the last minute, and we needed to build a bigger bridge than expected but within the same amount of time,” explained Trollip.

“The new one was 4.5 metres high on each side. We did not expect to be able to finish it in only one month. We spent every single day working, and we were able to finish the bridge in 26 days, which is the fastest bridge of that size ever built with B2P.”

Smith said she appreciated the opportunity to combine her engineering knowledge and passion for humanitarian pursuits.

“Construction was hard work—moving rocks, mixing concrete, carrying buckets, bending rebar. It was physically demanding work. But it all went smoothly,” she said.

She is now interested in working with B2P full-time in a bridge corps fellowship where she would help with site assessments and surveys, and assist with bridge builds during the summers.

“I’m passionate about humanitarian and environmental applications of engineering, so I’d like to do both of those in my career—this includes renewable energy and sustainable engineering. Another important part of this group is the leadership and global consciousness skills that you learn being a part of it."

As project manager and the only fluent Spanish speaker on the team, Trollip communicated with the local masons, organized daily work plans and deadlines, and ensured the team had materials and community members helping on site.

“The experience I gained working with the student group was just as valuable as the technical skills learned in classes,” he said. “I wouldn't have been able to get the management or leadership skills anywhere else.”

While a portion of the bridge is paid for by the community, the rest of the funds came from fundraising and sponsorships. Students raised nearly $40,000 for the build, thanks to crowdfunding and corporate sponsors, as well as donations from the Department of Civil and Environmental Engineering and the Faculty of Engineering.

“We were very fortunate that we had wonderful sponsors who donated money and exceeded our fundraising goal,” Trollip said. “Next year we are doing another bridge and we already have a big head start.”