U of A students learn Indigenous art of porcupine quilling

Native studies class introduces students to a cultural tradition and the meaning behind it. 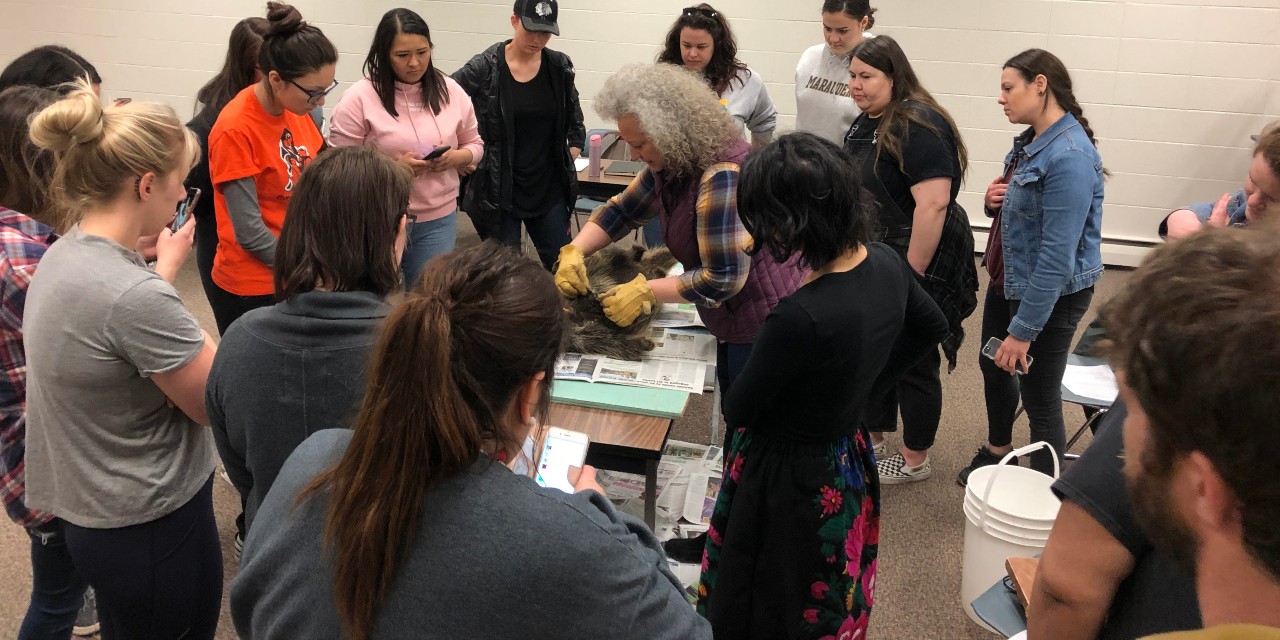 Métis artist MJ Belcourt Moses shows U of A students how to properly quill a porcupine in a class that brings traditional land-based learning to the university's urban north campus. (Photo: Supplied)

Skinning a porcupine in a University of Alberta classroom isn’t a normal occurrence, but for some students, it’s a transformative experience.

“A lot of us have not been raised learning our cultural traditions or ways of doing things, so I think it’s really important to have this here at university,” said Pam Greene, an undergraduate student in the Faculty of Native Studies.

The course, Porcupine Goes to the City: Quillwork Teachings, is the first time the faculty has offered a land-based class in an urban setting.

Taught by Métis artist MJ Belcourt Moses, Edmonton’s current Indigenous Artist in Residence, the course introduced students to the process of porcupine quilling, including harvesting—in this case, from roadkill—plucking, cleaning, dyeing and stitching.

Course co-ordinator Sara Howdle explained that the class is about porcupine quilling in relation to wâhkôhtowin, a Cree and Métis concept of the interconnectedness of all beings and relationships, and that emphasis is placed on learning about the complex relationship between the porcupine and Indigenous peoples. Howdle noted that knowledge keepers Ehtsue Lamothe, Dwight Paul, Doreen Wabasca, Bonny Spencer and Dorothy Thunder were instrumental in guiding the structure of the course, and the class’s understanding of wâhkôhtowin.

“It’s not just the technical aspect of quilling; knowledge keepers stressed the importance of the sacredness and teachings within those technical pieces,” said Howdle.

Land-based learning opportunities are valuable, she added, but can be expensive and require students to be away from home for periods of time. Bringing some of those opportunities into urban settings can open access and create opportunities for more people to participate in these teachings.

“This allows us to bring more Elders onto campus and make campus feel not only more welcoming, but also more of a space where Indigenous knowledges are not just seen as legitimate, but truly a part of the nucleus,” Howdle said.

Belcourt said bringing Indigenous ways of knowing and relating with the land to urban spaces like the U of A’s north campus is rewarding, but not without its challenges.

Land-based teachings are normally influenced and inspired by the environment around you, she explained. Noticing something outside and then talking about it—being in an animal’s habitat to understand more about it, for example—all helps to highlight that connectivity.

“We’re so much in our books or on our screens, and we forget this part, our holistic self. If we can learn with all those senses, then it has a little more meaning to it,” said Belcourt.

Traditionally, a skill like porcupine quilling would have been learned over a lifetime, Belcourt explained. People would be drawn to the art, go through ceremony to be a part of it, and it would become a part of who they are, she said.

Given that history, and the history of cultural appropriation at universities, Howdle said one of the first lessons the students learned was that these teachings aren’t simply “up for grabs.”

“The students are taught that they don’t have the right to go and pass that technical knowledge on. But they’re encouraged to share only some teachings and give credit to the Indigenous artists and knowledge keepers,” Howdle said.

Greene said the lessons of the course were something she took on personally and spiritually.

“We’re learning these teachings and combining it with wâhkôhtowin, which is ‘all my relations.’ It’s about passing on those things you learn and showing your kids, ‘You can do this, you can be a part of our culture still, don’t lose it,’” she said.

The course was created by the Rupertsland Centre for Métis Research (RCMR) and the Indigenous Women and Youth Resilience Project (IWYRP) in response to requests from students.

The Rupertsland Centre had previously led several workshops on campus, said director Nathalie Kermoal, including a class with Métis beader Jeanine Krauchi. The popularity of these workshops led to students requesting more land-based and traditional teachings.

“We asked ourselves, ‘Is there a way we can bring these teachings into the classroom? And if we can, how should we do it?’” Kermoal said.

To develop the course, the RCMR and IWYRP teams worked with knowledge keepers and Elders, and the discussions that arose were transcribed and became part of the required reading for the course. Elders were also invited into the class as guest speakers. Howdle and Kermoal explained that this inclusive process helped them shape every aspect of the course.

“We understood that [quilling] wasn’t just brought in, that there was lots of talk before, lots of information gathering and keeping the Elders included. It’s really a good experience for us,” said Greene.

The dream for both the IWYRP and the RCMR is to continue exploring what’s possible with land-based learning in an urban setting, and hopefully build an appropriate space in the Faculty of Native Studies to continue offering these courses, said Howdle.

“Ultimately this course was a pilot, but we’re hoping to continue providing these possibilities for students to connect or reconnect with these skills, and expand their learning through wâhkôhtowin,” said Kermoal. “Because if we’re talking about decolonization, it’s also about exploring other ways of learning.”

U of A students learn Indigenous art of porcupine quilling