Biodegradable menstrual pads could be an answer to single-use plastic ban. 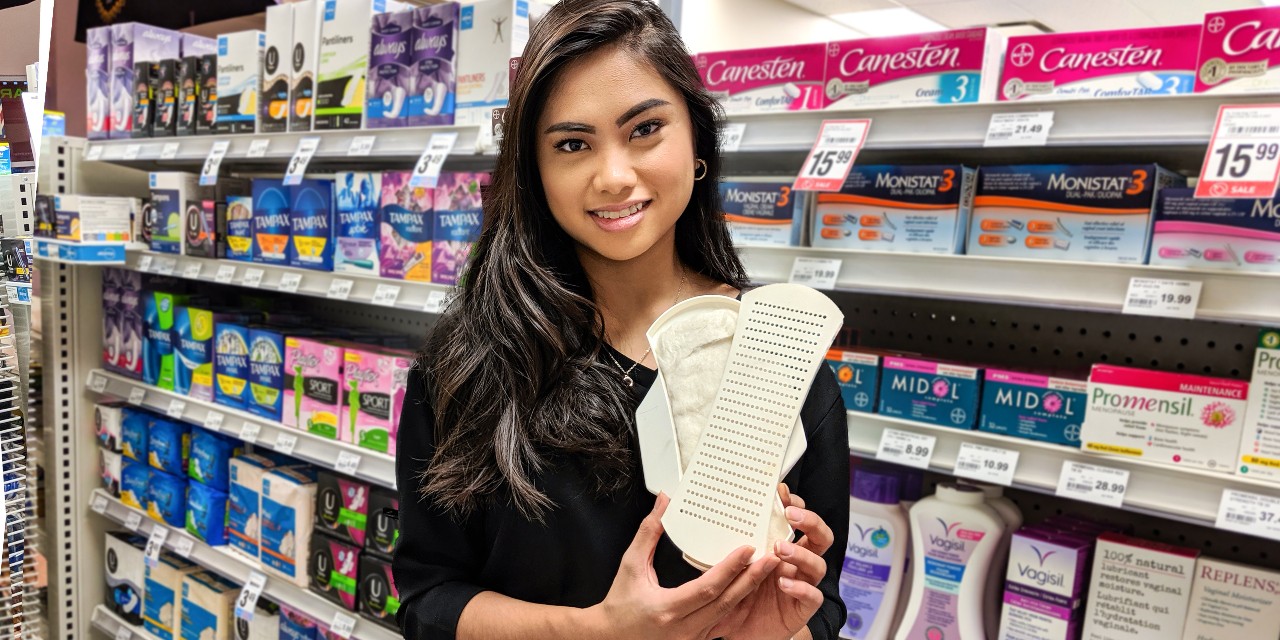 Hempact project manager Nicole Sanchez holds the startup’s prototype for a biodegradable, hemp-based menstrual pad, which the U of A business student hopes will be ready for market in time for the federal government’s proposed ban on single-use plastics. (Photo: Sean Townsend)

Every year, millions of plastic-lined feminine hygiene products wind up in Canadian landfills, destined to decompose over hundreds of years.

But a small startup led by University of Alberta students wants to change that with a hemp-based menstrual pad that biodegrades in just six months.

Nicole Sanchez is a fourth-year business student and project manager for Hempact, which won a $10,000 campus competition this spring and has been honing its pitch at competitions and venture capitalist panels ever since. And with the federal government hoping to eliminate select single-use plastics by 2021, Hempact could be ready for market a year before the plan goes into effect.

“I think our timing is really, really good,” said Sanchez. “It’s definitely good that government is aware of plastic waste.”

The idea for a hemp-based menstrual pad began two years ago at a student presentation at the Clean Energy Technology Centre in Drayton Valley, supported by the U of A's Rural eHUB program. In the fall of 2017, the project was picked up by the U of A Enactus Club, a social entrepreneurship incubator.

Hemp is a versatile crop making big strides in Alberta, where the fast-growing plant is ideally suited to long summers. A Drayton Valley company is already manufacturing fibre board for U.S. automakers. An Airdrie company produces a line of interlocking building blocks. And a new processing facility was announced this spring outside of Bruderheim.

Sanchez says her team will be looking to “cottonize” hemp fibres into an absorbent pad enveloped by biodegradable plastics. A new product prototype is due this summer. And the team is working on incorporating as a business soon after.

As with many alternative to plastics, it’ll cost a bit more. Packs of 30 pads will cost roughly $9—a $2 premium—but Sanchez said costs would come down as the project scales up. Her team is already pitching an expansion into tampons and diapers to prospective investors.

Sanchez fell into the project almost by accident. Just weeks after joining the Enactus club in early 2018, she was tapped to replace the graduating project manager for Hempact. The head of research and development also finished his studies.

“I was kind of forced into the role,” Sanchez said. “We were all left with new people who didn’t even know what we were trying to do.”

While balancing a full load of classes, Sanchez and her team struggled to build momentum. The real breakthrough came this March, when they picked up a $10,000 prize at the World’s Challenge Challenge (WCC), a competition to address a global problem with a solution built around the UN’s sustainable development goals.

The victory qualified the Hempact team to compete for the WCC global finals at Western University earlier this month. The $30,000 prize went to a University of Waterloo team with a similar idea: a washable cotton menstrual pad to be distributed in Uganda. While the U of A team didn’t win, Sanchez said they came home with renewed focus.

More recently, Hempact took home $5,000 for winning third prize at the Innovation Rodeo at Bow Valley College during the Calgary Stampede. They’ll also be getting ready for Falling Walls Lab, a student research-pitch competition in the fall that has sent U of A teams to Berlin.

There are also possibilities beyond the premium retail market. The team hopes to partner with the U of A Students’ Union on an upcoming free pad initiative, and Sanchez will be volunteering this summer with No Woman Without, an Edmonton-based charity that collects feminine hygiene products for vulnerable populations.

It’s been “surreal” to take over a project, Sanchez said, and then see it grow to new heights.

“There are so many people coming up to us, saying here’s our money,” Sanchez said. “It’s never happened before.”