U of A to remain strong despite economic uncertainty: President 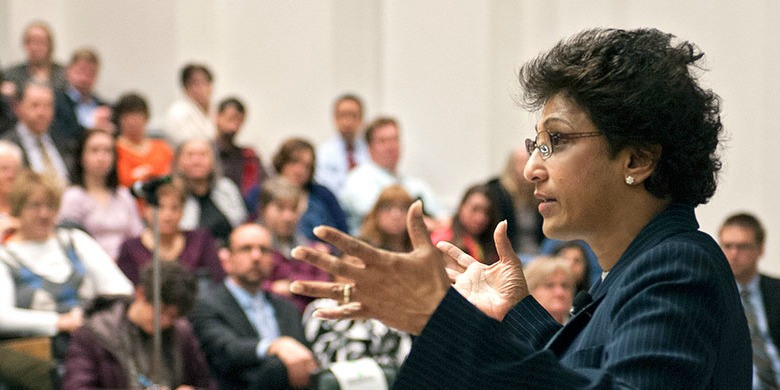 130228-indirasotu2013-banner
UAlberta President Indira Samarasekera answers a question from the audience during her annual State of the University address Feb. 28. (Photo: Richard Siemens)

(Edmonton) The University of Alberta is a strong, vital institution, but it is at a crossroads, said President Indira Samarasekera in her annual State of the University address on Feb. 28.

The university must make careful, strategic choices to address a structural deficit and position Alberta’s flagship university for continued excellence in a “new normal” of budgetary constraints, she said.

“We are a strong university with many assets of considerable value that far outweigh the challenges we face,” Samarasekera said. “The greatest of those assets are manifest in this room today—our talented people: our faculty, our staff, our students of the U of A.

“We can—and we will—define how this institution changes for the future so that we remain lively and vibrant, thoughtful and relevant, keenly interested in society’s future and remarkably able to deliver on our promise of uplifting the whole people.”

According to Samarasekera, the changing economic landscape means that in the coming months the institution will make fundamental changes to address its deficit and advocate for changes to the Campus Alberta funding model—without sacrificing quality of education or research.

“It is time for the government to be more strategic in its funding models. But it is also a time for faculty, staff and students of the University of Alberta to sharpen our focus, make careful and deliberate choices about our own institution and embrace our role as Alberta’s leader in post-secondary education and research,” Samarasekera said.

The university faces uncertainty in the lead-up to the March 7 provincial budget, with no clear indication as to whether the government will follow through with a promised two per cent increase to the Campus Alberta grant.

The Campus Alberta grant and tuition currently represent 90 per cent of the university’s operating revenues. Even with a two per cent increase, revenues will not cover the cost of expenditures, the majority of which are salaries and benefits, and which are rising by an average of four per cent annually.

Despite efforts to reduce costs, increase fundraising, maximize revenues and find new ways to do things through efforts such as through the Umbrella and Renaissance committees, Samarasekera said the gap between revenues and expenses is growing—estimated to reach $12 million in 2013-14.

In previous years, the university has bridged the gap by using investment income, one-time funding and other revenue sources; however, Samarasekera added that is no longer possible given current and anticipated interest rates and volatile market conditions.

The university must make fundamental structural changes to the institution’s underlying expenditures, she said, investing in strategic priorities and areas of strength that distinguish the University of Alberta provincially, nationally and internationally.

Samarasekera said the university will not implement across-the-board cuts that weaken the whole. Any future budget cuts or reallocations will be strategic and vertical in nature.

“Our students need a university that matches their 21st-century needs and aspirations. They need an educational experience and system that can be as tough, smart, flexible, creative and resilient as society will demand that they be.”

In the event of a flatline budget or cuts to the Campus Alberta grant, she added, the University of Alberta will also ask the provincial government to “untie our hands” and give the university the flexibility to create new budget and institutional models.

That case will be made through the university’s 2013 Comprehensive Institutional Plan, which is scheduled to be submitted to the province next month pending approval from the Board of Governors.

One size does not fit all

Samarasekera said the Government of Alberta needs to realize one size does not fit all and that as a research-intensive institution and Alberta’s flagship, the U of A has unique demands and needs. Institutions within Campus Alberta can each have an important role and complement the work of others for the good of the province.

“We are strong and vibrant. The University of Alberta is in an excellent position to expand our leadership role and to influence and shape a new direction for Canada’s post-secondary landscape,” she said.

“We need the ability to shape this institution as we believe it should be, to make academic decisions that will ensure the strength of the University of Alberta far into the future.”

During the question-and-answer session, Samarasekera answered questions on a range of topics, from how changes to the Campus Alberta model could affect collective agreements and morale, to tuition changes, the undergraduate experience and the university’s strategy with massive open online courses (MOOCs).

On finding new sources of revenue, including tuition increases, Samarasekera stressed the need for greater scholarship opportunities to ensure higher education remains accessible to all, and looked to the alumni community to help.

“We’ve got to find a lot of scholarship money, full stop, seriously,” she said. “I think our alumni need to step up the plate and help us—that is what the world’s best universities do.”

She said MOOCs are part of a global experiment, one the U of A wants to learn about in the hope of improving the quality of the student experience and opening access to higher learning in countries lacking those resources. It is not, she stressed, a means to replace faculty with technology.

“For a long time people were predicting universities were going to disappear,” she said. “That’s not going to happen—and I don’t think that’s ever going to happen—because young people need a physical space, and face-to-face interaction is ultimately the best way of educating people.”

Watch the State of the University address video

U of A to remain strong despite economic uncertainty: President
Newsroom