U of A well represented in latest Order of Canada appointees 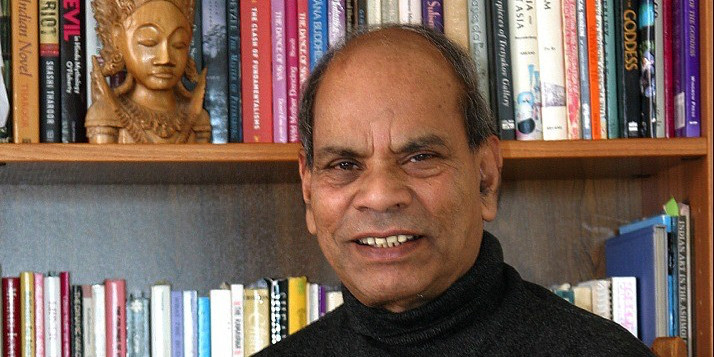 Professor emeritus Jagannath Prasad Das was named a member of the Order of Canada in honour of his developing a new theory of intelligence.

(Edmonton) What is intelligence? It’s a question that J.P. Das has been exploring for 50 years. The question first came to him as a child in his home country of India, where his grandfather—a man with only primary school education—was often consulted for his opinion by highly educated government officials.

Already highly decorated as a fellow of the Royal Society of Canada and the winner of the University of Alberta Research Prize, Das will travel to Ottawa this fall to be officially appointed to the Order of Canada for his internationally recognized work in cognitive psychology, notably in the development of this new theory of intelligence. He will be joined by four alumni of the U of A: Joyce Fairbairn, E. Leigh Syms, Don Tapscott and Phyllis Yaffe.

Even as a young person, Das knew that being smart wasn’t necessarily tied to a person’s years in school; knowledge of facts or processes wasn’t what makes a person intelligent. It was something else—an ability to plan, to combine different kinds of information and make decisions.

Fascinated by the notion of intelligence, Das studied neuropsychology and psychology to develop a new way to measure intelligence that wasn’t tied to culture or education.

“With conventional IQ tests, they measure arithmetic, vocabulary, general knowledge things like what’s the distance between L.A. and New York, telling time … all of these things are learned at school,” says Das, professor emeritus in the University of Alberta’s Faculty of Education and director emeritus of the U of A's J. P. Das Centre on Developmental and Learning Disabilities. He notes that about half the questions on a standard test (the Wechsler Intelligence Scale for Children or WISC) depend on school achievement. “What about a child who went to school in a different language? Or has been in a refugee camp for the past four years? Or has never gone to school?”

The Das-Naglieri Cognitive Assessment System, developed and published in 1997, was Das’s answer to those questions—a test designed to assess cognitive function in a way that reduces educational and cultural differences. “We knew that we needed a brain-based understanding of intelligence.”

The Das-Naglieri test assesses four processing functions: planning, attention, simultaneous and successive (sequencing). These building blocks of thinking, related to different part of the brain, are what make up intelligence.

Das notes that with his theory of intelligence, and the assessment he designed from it, he can tell whether a child as young as age three or four will have difficulty in various areas. “In our test, we can see the pattern of those who are poor in reading. Even before they learn to read, we can identify that they will have trouble with reading. For example,it will be difficult for these kids to repeat a strange word, 'erapalamindi.' Because it is a problem with a cognitive function—in this case, sequencing.”

Knowing where the weaknesses may lie has helped educators and psychologists worldwide work with kids and parents to tackle them. The test is now used widely in the United States, and has been adopted by the Los Angeles public school board for assessing students. It has also been used by school boards and psychologists in the Netherlands, Norway, Spain, Korea, China, and Japan. In an increasingly multicultural world, brain function testing is becoming more and more appropriate.

Das notes that the Das-Naglieri test also allows for tailored interventions to improve a student’s performance and intelligence.

“There is a movement against employing school psychologists, because some believe that all they do is give tests and brand people in terms of IQ. Our tests help psychologists to place kids in appropriate programs.”

“IQ guides the lives of our kids. Many people—kids, and young men and women—believe what their counsellor or school psychologist has said, that they’re poor in intelligence. And they have this idea all their lives. It affects them badly. We begin to label them, 'You are below average in IQ, it means you can never change.'”

Das doesn’t believe that IQ is innate; he says intelligence can be learned. "If intelligence is of four kinds, and two of them—simultaneous processing and sequencing—are weak  for poor readers, it was observed that following cognitive remedial intervention, reading showed improvement and the effect of intervention frequently spread to improve the cognitive processes as well."

In a cross-cultural study, Das found that First Nations children in Maskwacis were poor readers and poor sequencers. But after six months of remedial practice to build up the sequencing function, they showed marked improvements in reading.

Despite the accolades and the revolutionary results his theory has produced, Das is not one to rest on his laurels. He intends to find out more about how intelligence is related to language, culture and environment—and he is still asking the questions that have always driven his curiosity. “Why are middle-class children better at language? What does culture have to do with vocabulary and reading?

Four U of A alumni among latest Order of Canada appointees

Four of the newest members of the Order of Canada are alumni of the U of A. Former Canadian senator Joyce Fairbairn was recognized for her commitment to the people of her province and for her staunch support of the Paralympic movement. E. Leigh Syms, who earned a PhD from the university in 1976, was honoured for his contributions to preserving Aboriginal artifacts and for his efforts to advance public awareness of archeology in Manitoba. Don Tapscott was recognized for his leadership in the field of business innovation, and notably for his research on the economic and social impact of information technology. And Phyllis Yaffe, former CEO of Alliance Atlantis, was honoured for her contributions to Canada’s cultural life and her role as the founding chair of Women Against Multiple Sclerosis.