U of A ‘will not act reflexively’ on budget cuts, says president

Decisions will focus on protecting quality of research and learning, says David Turpin at campus forum. 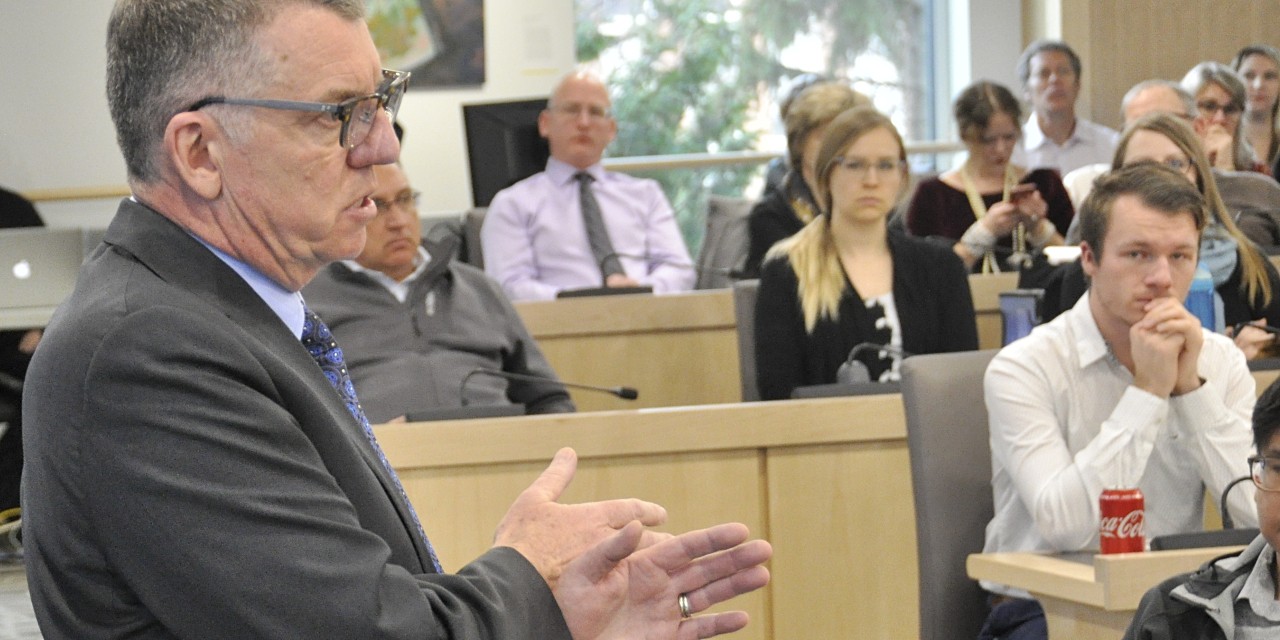 U of A president David Turpin addresses the audience at a campus forum held today to discuss the impact of provincial budget cuts and the university's options to adapt to them. (Photo: Michael Brown)

Every option will be on the table as the University of Alberta adapts to a $79-million budget cut this year, but every decision will be made with the university’s long-term health in mind, vowed U of A president David Turpin at a campus forum today.

As part of the provincial government’s 2019-20 budget announced last week, the Campus Alberta Grant to the post-secondary sector was cut by 5.1 per cent. The reduction varied from institution to institution, with the U of A and the University of Calgary each taking a 6.9 per cent cut, which amounts to $44 million for the U of A. In addition, the university will not receive $35 million this year for its infrastructure maintenance program.

“What we're seeing now is a sea change in public funding of all public sector institutions and universities and colleges,” said Turpin.

“We will not act reflexively,” he added. “This is a bump in a very long road. It's a big bump, but we’ll come out at the end of this and we will still be a great university.”

Turpin said university administrators have been planning for several budget scenarios since the spring and will endeavor to address as much of the cut through central funds as possible.

Immediate actions include the cancellation of about $10 million in deferred maintenance contracts planned for this year, using a modest in-year operating surplus and seeking board approval for drawing on the university’s investment reserve to help in the short term.

“We anticipate that before we start allocating any of the cut, we hope to deal with about half of it (through these measures) before it moves out into units and faculties,” he said. “That’s our goal.”

Turpin also clarified assertions that U of A administrators were sitting on a $90-million consolidated surplus. He explained that due to provincial accounting standards, the majority of the surplus comes from the growth of the university’s endowment, which is made up of gifts and other revenues earmarked for defined purposes, apart from the university’s operating budget. The rest, he said, includes planned surpluses developed by ancillary services to address infrastructure needs, carry-forwards within individual faculties and units designated for future investment and procedural accounting practices as related to pensions.

“It's not cash in anyone's pocket,” he said.

Turpin added some of the budget’s effect on the university remains unknown due to a lack of information on enrolment targets, the magnitude of cuts to research agencies, and changes impacting labour negotiations. In addition, the elements and impact of a new provincial funding allocation model that will come into effect in 2020-21 are unknown.

“There are several areas where we need clarification,” said Turpin.

He said he hopes the information will be provided by the provincial government in its budget letter to the university.

As part of the budget, the province lifted the tuition freeze that had been in place since 2015, allowing institutions to increase tuition on average by seven per cent each year for three years.

Turpin said the entire burden of this budget cut will not be passed along to students or their families, noting the U of A will set aside a portion of incremental tuition rate revenue to increase its needs-based bursary program.

Other sources of revenue could include increasing enrolments, both domestic and international, increasing market modifiers for course-based, professional master’s degrees and using revenues generated by the university’s land trust.

When asked about the possibility of layoffs, Turpin said it is likely that some layoffs will be necessary.

“We need to think this through,” he said. “We will be working with the deans and with the unit leads to do everything we can to ameliorate the effects of these reductions on job loss.”

He added deans, chairs, vice-presidents and others will make budget decisions in the best interests of the long-term health of the university.

“Our primary goal will be to focus on protecting the quality of the research and learning environment at the U of A. Other institutions have undertaken this kind of restructuring in the past and we will be able to learn from them,” said Turpin.

He expects final decisions for 2019-20 will be made in early November, while planning for 2020-21 continues.

U of A ‘will not act reflexively’ on budget cuts, says president