Emerging poet follows national Griffin Prize win and Indigenous Voices Award with Robert Kroetsch Award for his poetry collection, This Wound is a World—not to mention a national Trudeau Scholarship. 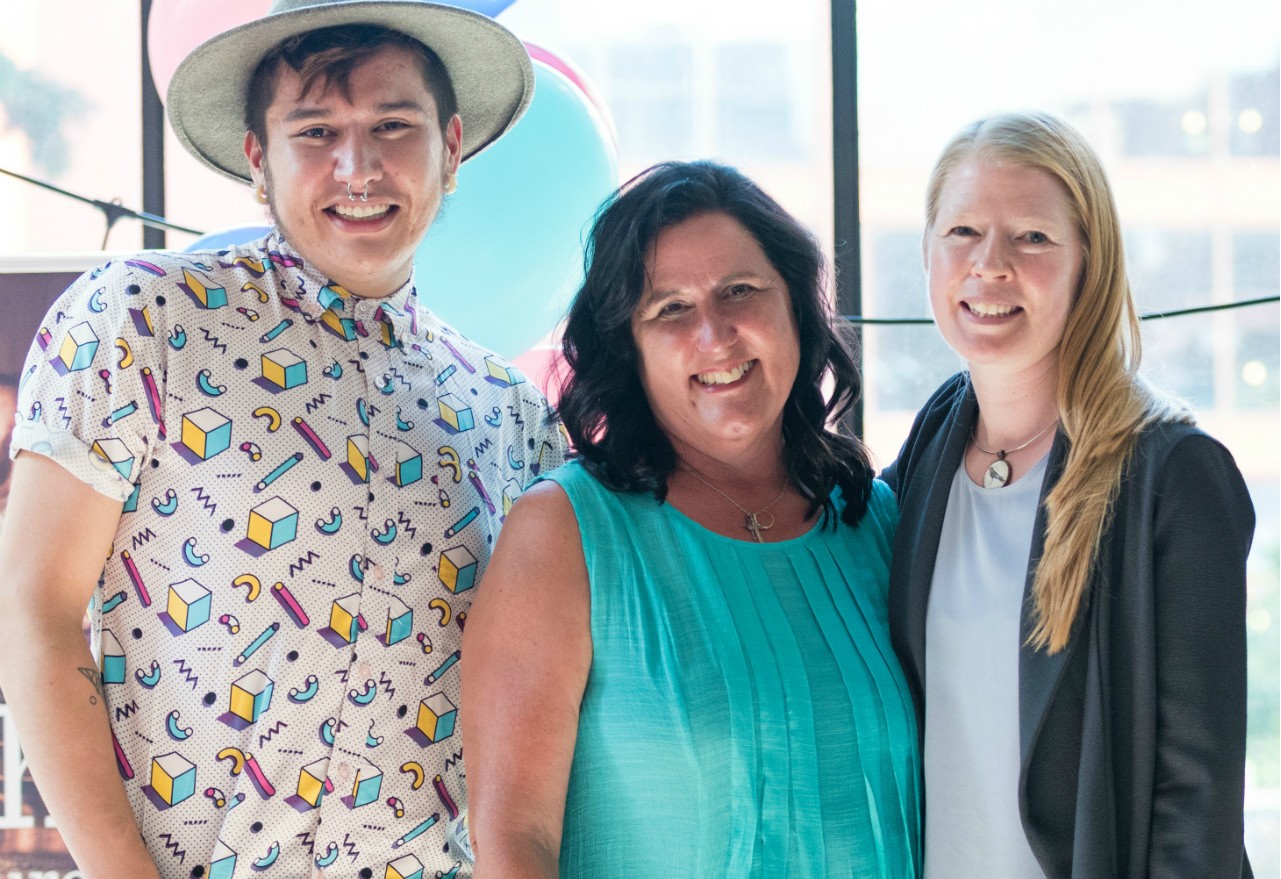 (From left) Billy-Ray Belcourt, winner of the Robert Kroetsch City of Edmonton Book Prize, with fellow shortlisted authors Norma Dunning and Lisa Martin. All three are PhD students at the U of A. (Photo: Melissa Penney Photography)

Billy-Ray Belcourt is getting used to winning.

This time the University of Alberta doctoral student in English managed not to cry at the podium when he accepted the Robert Kroetsch City of Edmonton Book Prize yesterday for his poetry collection, This Wound is a World, a book that is taking Canada by storm.

Just two weeks ago he broke down in tears when he became the youngest ever to win the country’s most prestigious award for poetry, the Griffin Poetry Prize.

"Last time I didn't get the chance to thank everyone because I was sobbing,” he said, his voice only slightly cracked with emotion. “So now I can think."

Administered by the Writers’ Guild of Alberta and established by city council in 1995, the Robert Kroetsch City of Edmonton Book Prize comes with a $10,000 cash award. The prize was renamed in 2011 after the Governor General’s Award-winning author of The Studhorse Man.

All three finalists are doctoral students at the U of A, selected from a total of 38 entries by a jury of three. Norma Dunning in the Indigenous Peoples Education program in the Department of Educational Policy Studies was nominated for her short-story collection Annie Muktuk and Other Stories, and Lisa Martin in the Department of English and Film Studies was nominated for her poetry collection, Believing is not the same as Being.

Belcourt has enjoyed a staggering run of success lately, but said the local recognition is especially sweet.

For one thing, it fell appropriately on National Indigenous Peoples Day. But the Pierre Elliott Trudeau Foundation also announced yesterday that the former Rhodes Scholar is one of two U of A arts students to receive one of its doctoral scholarships, along with William Shultz of the Department of Sociology.

The Trudeau Scholarship is one of the most prestigious in Canada, encouraging critical reflection and action in four areas important to Canadians: human rights and dignity, responsible citizenship, Canada’s role in the world, and people and their natural environment.

But as recipient of the Kroetsch Award, Belcourt said he appreciates his role in promoting “the voice of Edmonton writing.

“I'm absolutely thrilled that the jury saw in my book something that could stand in for the strength for Edmonton and its poets. But I honestly didn’t think I would get this one. I didn't think the universe could throw this much success at me in a handful of weeks."

Last month Belcourt also received a 2018 Indigenous Voices Award, which comes with a $5,000 cash prize, for “most significant work of poetry in English.”

The collection comes “as a punch to the gut, a cold shower, a knife to the temple,” wrote one juror on the Kroetsch Award panel. “Each poem is a bracing call to attention. We could feel in our very bodies that Billy-Ray Belcourt is doing something original and vitally important.”

“Brutal in the best possible way,” wrote another. “There is no witnessing without complicity. Rather, it causes the reader to examine his/her assumptions about gender/relationships/the violence done to bodies who do not fit into the tyranny of binary-systems.

“The echoes of generational and cultural violence are clear and resonating, but never reduce the story-teller to an ‘already known.’”