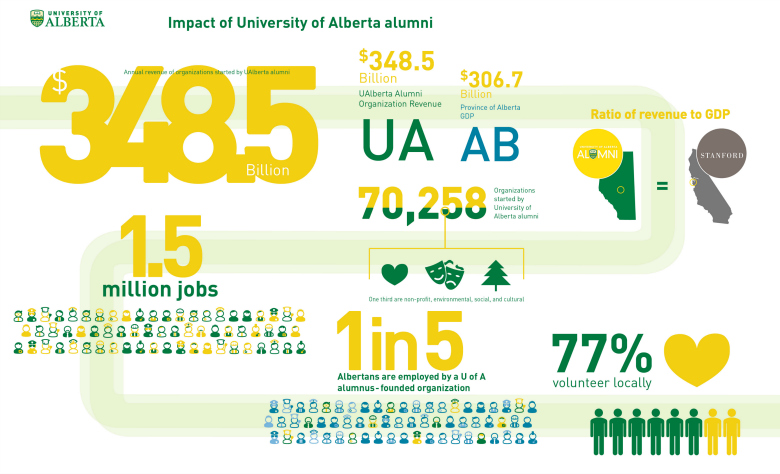 130930-alumni-impact-2013-banner
A new study reveals the staggering economic impact UAlberta alumni-founded organizations have in Alberta and around the world.

(Edmonton) A new landmark study estimates that University of Alberta alumni have collectively founded 70,258 organizations globally, creating more than 1.5 million jobs and generating annual revenues of $348.5 billion. By comparison, the annual gross domestic product of the province of Alberta is $306.7 billion.

Of those jobs, 390,221 were created in Alberta. With 2.1 million people being employed in Alberta in 2012, roughly one in every five Albertans is employed by a company founded by a University of Alberta graduate.

The study, by University of Alberta professors Tony Briggs (‘95 BSc Hons) and Jennifer Jennings, is the first of its kind in Canada, and builds on methodology used recently at MIT, Stanford and Tsinghua University in China.

“These staggering numbers are further evidence that University of Alberta alumni drive the economy of Alberta and have global impact,” said U of A President Indira Samarasekera. “Our alumni also promote and lead social and cultural change, fostering innovative thinking and creating societal value that extends beyond dollars and cents.”

The study also estimates that, on average, each organization founder started 1.84 organizations, and that annual revenue per employee is $220,301.

The survey is the first of its kind to examine the nature of the mission of alumni-founded organizations. One-third (23,332) of the 70,258 organizations started by U of A alumni are non-profit or have a cultural, environmental or social mission. It also shows that more than 77 per cent of U of A alumni have volunteered locally, and 17 per cent have volunteered outside Canada.

The potential social impact of alumni-founded organizations resonates with U of A alumnus Ray Muzyka (’90 BMedSc, ’92 MD), a successful entrepreneur who is now focused on giving back. He co-founded BioWare with two fellow med school alumni in 1995, staying on in a senior leadership role after BioWare was acquired by Electronic Arts in 2007 until his retirement in October 2012.

“My science and medical training at the U of A fostered a lifelong passion for continuous learning, taught me the vital importance of humility and made me aware of how critical teamwork and collaboration are for sustaining entrepreneurial success,” said Muzyka.

“The results show nothing less than human progress through collective and creative acts—and it is universities that incubate and accelerate this progress,” said Briggs.

Jennings notes, “The study reveals that the university is a catalyst for our alumni to take leadership roles in the world. When asked, our alumni indicate that it is our faculty who are the leading catalyst that has fuelled their successes.”

A previous study by Briggs and Jennings released Oct. 2, 2012, showed that the U of A annually contributes $12.3 billion to the Alberta economy—the equivalent of 135 NHL teams. That study focused on the direct impact of institutional and visitor spending combined with induced economic impact from university education and research.

The University of Alberta Alumni Impact Survey was emailed to 84,387 alumni in the summer of 2012, and received 11,229 responses and 8,853 fully completed responses.

See highlights from the report