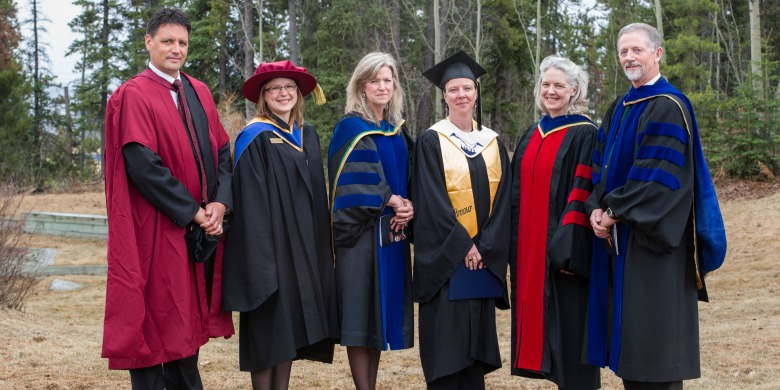 (Edmonton) The University of Alberta awarded the first bachelor of science degree north of the 60th parallel in Canada when Natasha Ayoub was presented her degree May 11 during the convocation ceremony at Yukon College.

Ayoub earned a BSc in environmental and conservation sciences, with a major in conservation biology, after completing the program, which is a partnership between the U of A and Yukon College.

The partnership allows students in the Yukon to obtain their degree without having to leave the territory. It started in January 2010 when Ayoub and eight other students enrolled.

“I’m really happy the North is moving toward having education locally based,” she said. “That’s really important to me. It’s great that Yukoners don’t have to move away anymore to get an education.”

Ayoub had previously earned a diploma in renewable resource management from the college in 2007 and wanted to further her studies. At the time, she would have had to either leave the territory or take an online degree.

“I was hesitant to complete a BSc online so I was really happy when they announced the environmental and conservation sciences program from the U of A would be starting at Yukon College campus. I didn’t want to leave the territory.”

Ayoub was the first to graduate from her class because she had the luxury of taking more classes than her classmates—all of whom, like Ayoub, are working professionals. At least five more are expected to graduate next year and many more in the years to come. The program currently has 35 students enrolled, the vast majority of whom are working professionals, but that now includes some transfer students from diploma programs at Yukon College and other post-secondary institutions.

The ENCS program offers courses from the U of A’s Faculty of Agricultural, Life and Environmental Sciences, where it resides, as well as from the Faculty of Native Studies and, of course, from Yukon College’s School of Science.

Ayoub said one of the things she really appreciated about the program is its emphasis on Yukon-specific issues—something Fiona Schmiegelow, a U of A professor and ENCS program director based at Yukon College, has worked hard to accomplish.

“The program integrates natural and social sciences as related to issues such as wildlife conservation, land use, energy and global climate change. The Yukon is an ideal location to witness some of these global changes and their impacts,” said Schmiegelow.

During her undergraduate degree, Ayoub worked for Access Consulting Group, an environmental consulting company, where she continues to work today.

“I have a job that I love that I wouldn’t have qualified for without this degree,” she said, adding that she is pursuing her studies further. She enrolled in a master of science program in environmental practice where she’ll be studying mine reclamation and remediation using native plant species in fish-bearing streams.