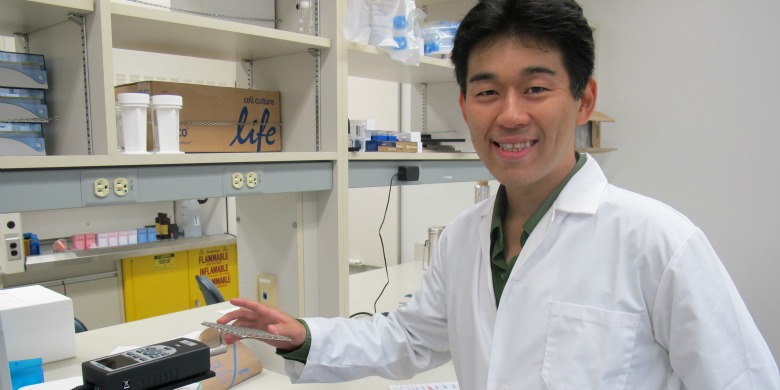 120810-toshifumiyokota-banner
U of A medical researcher Toshifumi Yokota used a new drug cocktail to lessen the severity of Duchenne muscular dystrophy symptoms in lab models.

(Edmonton) A researcher in the Faculty of Medicine & Dentistry at the University of Alberta improved Duchenne muscular dystrophy symptoms in non-human lab models, using a new drug cocktail. The drug combination targets the “hot spot” of the gene mutation, making the condition less severe.

Yokota has worked on this research for more than five years. He is now using the same drug cocktail on human cells with Duchenne muscular dystrophy and hopes to see similar results.

Duchenne muscular dystrophy, one of the most common genetic disorders, is caused by a lack of dystrophin, a muscle-supporting protein. In the lab, the drug cocktail improved normal functioning of the mutated gene that triggers the condition. The therapy allowed the lab models to produce 10 per cent to 15 per cent normal levels of dystrophin.

“With this drug cocktail, we were able to target the hot-spot mutated parts of the gene,” said Yokota. “The results were very good—better than we expected. The Duchenne muscular dystrophy condition was less severe.”

Yokota noted that about half of those living with Duchenne could potentially benefit from the drug cocktail, once further testing is conducted and clinical trials are completed.

He worked with colleagues in the United States and Japan on the findings.