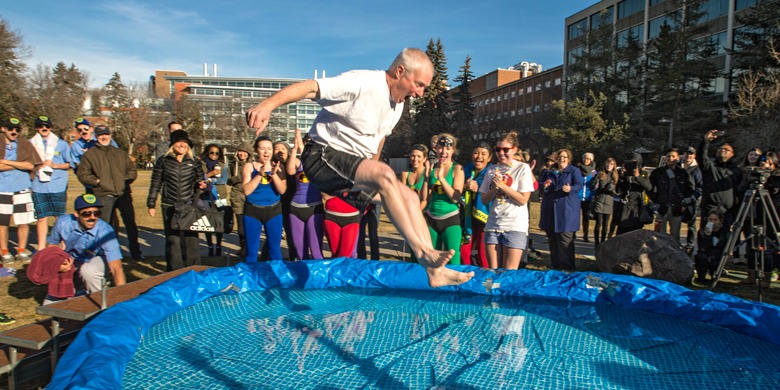 (Edmonton) A bracing -5 C couldn’t stop a determined group of divers from taking the plunge for charity in the University of Alberta’s main quad this morning. The eighth annual Chillin’ for Charity, a campus event to raise money for the United Way, saw almost 100 participants doff their warm clothing and dive into the frigid waters.

Joseph Doucet, dean of the Alberta School of Business, led the procession into the pool. Doucet spoke of the importance for students, faculty and staff to come together as active and contributing members of the community in a “fun” activity.

“The United Way is a great organization,” said Doucet. “We participate fully and completely with them.”

The Chillin’ for Charity drive, an event held at schools nationally as part of the Jeux de Commerce games, is expected to raise roughly $10,000 for the campus campaign.

Amanda Heck, a business student and this year’s organizer of the event (as vice-president internal of the school’s JDC West team), says she was impressed by the turnout and the commitment of all participants, especially given the temperature. A second-year plunger, she is equally pleased by the commitment of donors, noting that it is still not too late to pledge some “cold” cash to the campaign.

“The United Way is an amazing organization,” Heck said. “We’ve been pleased to have been working with them over the last eight years.”

U of A United Way campaign chair Darlene Bryant points to the Chillin’ event as one of the creative and engaging ways the University of Alberta community gets involved for the cause. Citing the Population Research Lab’s bake sale and an upcoming Protective Services fundraiser—in which a donation can lock a colleague in the “clink” (a.k.a. the Central Academic Building)—she says units and campus groups are coming together to build community locally and within the greater Edmonton region.

“When we build community spirit, we foster caring for everyone in the community,” she said. “And that’s what the United Way is all about.”