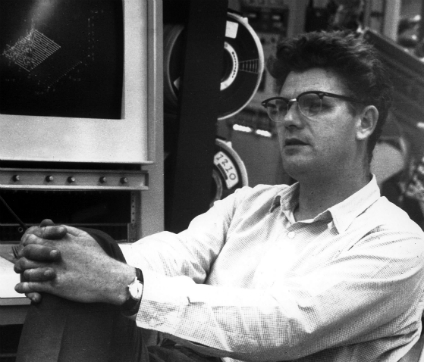 Richard Taylor in 1967, when he was conducting the series of experiments that would ultimately prove the existence of quarks. (Photo: Wikimedia Commons)

Throughout his career, the celebrated particle physicist and UAlberta alumnus was an advocate for the value of education and the potential of Canadian research.

Richard Taylor revealed his characteristic self-deprecating wit in this 2008 interview as he talked about his time at UAlberta and the good fortune that helped him win the Nobel Prize in physics in 1990.

The only University of Alberta alumnus to win a Nobel Prize died at his home in California last week. He was 88.

Richard Taylor won the Nobel Prize in physics in 1990 for providing the first experimental evidence of quarks, the subatomic particles forming the basis of 99 per cent of all matter.

Born in Medicine Hat in 1929, Taylor attended the U of A, where he earned a bachelor of science degree in 1950 and a master’s degree two years later.

Upon graduation, Taylor married U of A education grad Rita Jean Bonneau and was accepted to Stanford University, where he earned his PhD as part of the High Energy Physics Laboratory.

The quest for quarks

Taylor’s studies took him to Paris for three years, then to the Lawrence Berkeley Laboratory in California before he returned in 1962 to Stanford, which had just begun construction of a two-mile-long particle accelerator.

Based on theories that proposed the idea of point-like particles that made up protons and neutrons, Taylor and colleagues from the Massachusetts Institute of Technology ran experiments on the accelerator that would ultimately prove the existence of quarks in 1968.

In 1990, Taylor, along with Jerome Friedman and Henry Kendall, shared the prize for their work.

Despite his new home in California, Alberta was never far from Taylor’s mind. His family, which would come to include a son, spent parts of most summers in southern Alberta, where Taylor could be found, without fail, fishing in the Oldman and Crowsnest rivers.

He also strengthened his connection with his alma mater.

In 1991, Taylor received an honorary doctorate in science from the U of A and in 1994 he was part of the first cohort added to the Alumni Wall of Recognition.

When a Gateway reporter asked him about the Nobel Prize, the humble physicist—who often responded to questions about his successes by saying he was “lucky”—wryly quipped, “At (Stanford) there are 13 Nobel Prizes at the moment . . . so they're not that special there."

An advocate for education and research

And while he was often self-deprecating when it came to his own achievements, Taylor became a fierce defender of basic research and the value of an education.

“Everybody's education hangs with them for the rest of their life. You can never get away from it,” he said in a 1994 interview.

During a visit to the U of A campus in the immediate aftermath of his Nobel Prize selection, Taylor became a bellwether about the state of Canadian research.

"I think Canada had better get on the stick as they are wasting time . . . there is no reason why Canadian universities should not come up to the level of U.S. colleges.”

A year later, as the keynote speaker during the Canadian Undergraduate Physics Conference held at the U of A, Taylor echoed his own sentiment.

“Canada used to be the centre of the world in physics research, and there shouldn't be any reason why we can't be again.”

That notion, which he repeated throughout the years, seemed to resonate with politicians and university administrators alike.

In 1992, he accepted an invitation to join the U of A’s physics department as an adviser and began making annual visits, which he made good on for 20 years. Taylor’s last visit to the U of A came when he helped officially open the Centennial Centre for Interdisciplinary Science in 2011.

Taylor’s love of the unknown was evident whenever he spoke, likening research to a spiritual journey.