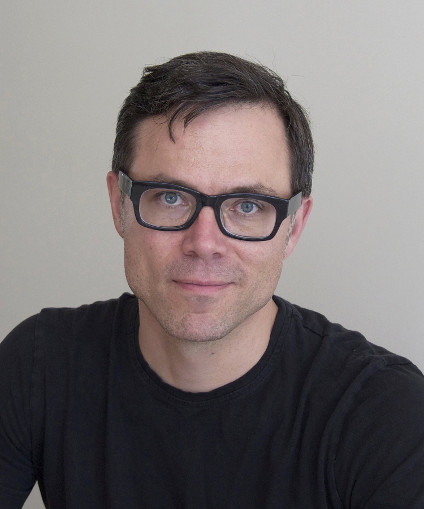 Tim Caulfield made the most-influential list for his efforts to use health research to debunk myths and promote evidence-based policy.

Professors, alumni figure prominently in Alberta Venture’s latest list of 50 most influential people in the province. 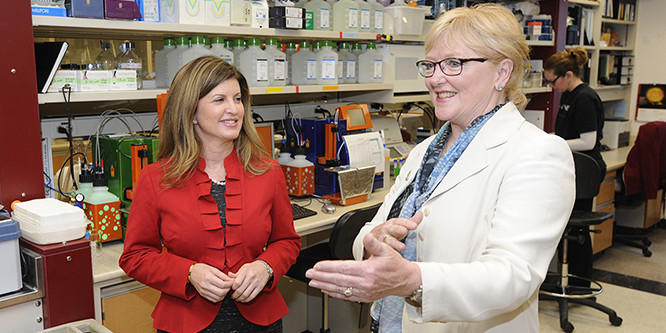 Lori West gives health minister Rona Ambrose a tour of her lab. West was named one of the 50 most influential Albertans for her work to improve organ donation and transplantation.

(Edmonton) Perhaps the heaviest influencer of Alberta Venture magazine’s 2014 Alberta’s 50 most influential list is the University of Alberta.

Five professors and 11 alumni and friends of the university made the vaunted annual list of Albertans who are having the biggest impact on the province’s issues of the day.

Lori West, professor of pediatrics, surgery and immunology, made it to the list for her dedication to improving Alberta’s discouraging organ donation rates.

West is the founding director of the U of A’s Canadian National Transplant Research Program, a $25-million project established in 2013 that brings together 105 researchers from across the country to study every aspect of organ donation, from which social factors improve donation rates to how to prevent the failure of donated organs.

West says it is one thing to work on ways to help inform the scientific community, but knowing her efforts are influencing perceptions and policy is very rewarding and a large part of the reason she became an academic.

“Having your work filter out into the non-medical community is what is needed to create change and solve problems, especially when it comes to organ donation and transplantation,” she said.

West’s advocacy is beginning to pay off. In April, Alberta launched its new online Organ and Tissue Donation Registry, which allows residents to sign up online and asks what they’d like done with their organs in the event of their death.

“Success for me would be if we could ensure that every Canadian who needs a transplant has the opportunity to receive one, and that we’ve improved long-term outcomes so individuals who are saved by this therapy are able to have long, healthy lives,” West told Alberta Venture.

Joining West on both the Canadian National Transplant Research Program and the most-influential list is Tim Caulfield, law professor and director of the U of A’s Health Law Institute.

Caulfield, who waded into the transplantation deliberation to help provide some ethical and legal expertise, made the list for his ability to “cut through the murk and translate meaningful health information to the public, all while promoting sound, science-based health policy.”

The author of the bestselling The Cure for Everything: Untangling Twisted Messages About Health, Fitness and Happiness, Caulfield investigates the ethical questions behind stem-cell research, genomics, transplantation and a host of other health issues.

"I am honoured to be part of this terrific list,” he said, adding the praise is a reflection of a great interdisciplinary team.

“You always hope that your work will have some kind of impact. It’s so nice to see the issues of pseudoscience and health myths profiled."

Joining Caulfield and West as U of A faculty on the list are Andrew Leach, professor in the Alberta School of Business, whom Alberta Venture calls the “voice of reason in the increasingly strident debates over energy, the oilsands and the future of the Canadian economy”; Wenran Jiang, comparative politics professor and former Mactaggart Research Chair at the U of A’s China Institute, who is a key adviser for the Alberta government and Alberta companies on navigating Chinese markets; and James Talbot, an alumnus and adjunct professor in the School of Public Health who, as Alberta’s chief medical officer of health, challenges the belief that the oilsands causes cancer.

U of A alumni making the list include Shawn Abbott, BSc ’87, a venture capitalist who specializes in internet security and hardware cryptography, and holds an early patent as one of the inventors of the ubiquitous USB key; Chris Buyze, a graduate of the U of A’s design program, who designs energy-efficient homes and led the charge to ensure the future home of the Oilers, Rogers Place, had more of a street focus; Shane Fildes, BCom ’93, the head of the Global Energy Group at BMO Capital Markets; Canadian activist Mike Hudema, who graduated with degrees in education and law and served as the 2002-03 Students’ Union president; and Daryl Katz, BA ’82, LLB ‘85, owner of, among other things, the Edmonton Oilers and namesake of the Katz Group Centre for Pharmacy and Health Research at the U of A.

Susan McDaniel, professor of sociology at the U of A from 1989 to 2009, made the list thanks to her work on the 2014 Labour Market Assessment 2014, which showed that Canada has enough workers for its available jobs, the problem being whether those workers live in the right areas.

Community leader Roy Louis, recognized among the top influencers for his efforts to turn around the fortunes of the troubled Maskwacis (formerly Hobbema), served on the U of A senate in the 1990s, and notable architect Jeremy Sturgess was hired to complete the 2008 renovations of the Law Building.