Student-athletes, mission staff to represent their university and nation at 27th Winter Universiade in Granada, Spain. 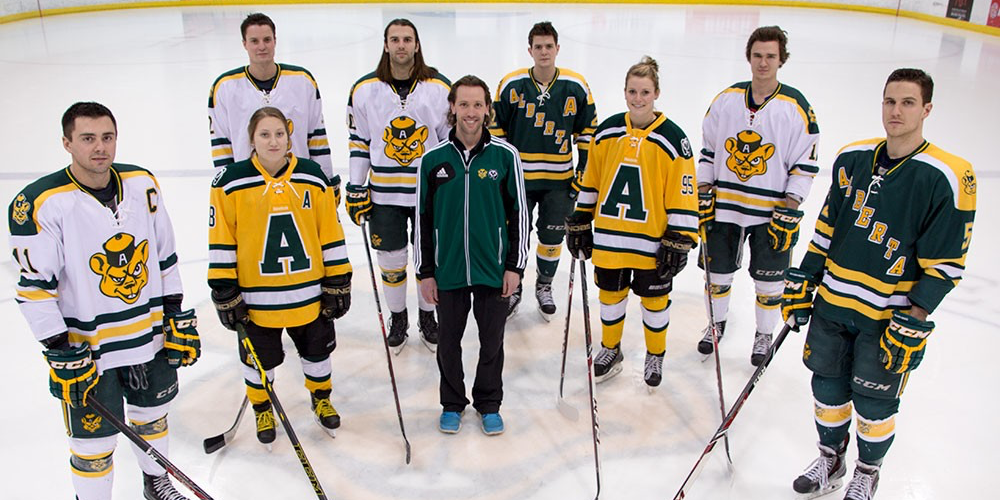 Eight student-athletes from Golden Bears and Pandas Athletics are among UAlberta's contingent of 14 individuals who will represent Canada at the 27th Winter Universiade in Granada, Spain.

(Edmonton) Team Canada’s delegation for the 27th Winter Universiade in Granada, Spain, will feature 14 members from the University of Alberta.

The U of A contingent will be spread out across Canada’s men’s and women’s hockey teams, the biathlon team and the official mission staff for the biennial games, which run Feb. 4–14.

Six student-athletes from the Golden Bears hockey team will suit up for Team Canada, along with a pair of Pandas hockey student-athletes who will play for the Canadian women’s team. Also named to Canada’s official delegation are Jessica Paterson, Sasha Eccleston, Keely MacCulloch and Lowell Niven, all of whom are with the biathlon team. T.J. Mussbacher, a leading member of the Golden Bears and Pandas varsity health team, has been named to Canada’s medical squad, and Matt Gutsch will serve as Team Canada’s communications officer.

Pandas forwards Jessica Kampjes and Tess Houston will both wear the red and white in an effort to help Canada defend its gold medal. Kampjes, a third-year winger from Sturgeon County, Alta., is a former Canada West Rookie of the Year; Houston, who is originally from Winnipeg, has nine points this season, her fourth with the Pandas.

Both Rowley and Craige are former All-Canadians and Canada West Defencemen of the Year award winners, and Rowley attended the Edmonton Oilers training camp this past fall. Hickmott, who attended the New York Rangers camp before joining the Bears, is currently second in points in Canadian Interuniversity Sport with 33 and first in goals with 16. Foster also has 33 points, and is second in CIS with four game-winning goals. Koper, a draft pick of the Atlanta Thrashers (2009, 7th round, 185th overall) and a Memorial Cup winner with the Spokane Chiefs, was the University Cup hero in 2014 when he scored a pair of goals, including one short-handed, to lead Alberta to its 14th national championship trophy. Reddick was also key to that University Cup title win, as he returned from injury just days before the tournament began, and put up five points in three games to earn a spot on the University Cup All-Star team. He also serves as the Golden Bears captain.

Keely MacCulloch and Jessica Paterson are competing for the second time on Canada’s biathlon team, after representing their nation at the 2013 Games in Trentino, Italy. Lowell Niven, team leader for 2015, is also attending his second consecutive games after serving as the technician in Trentino. MacCulloch, Eccleston and Niven are all from the U of A’s Augustana Campus, and from the U of A’s biathlon program—the only program outside of Europe to offer university-level biathlon. MacCulloch competed in the 2012 Junior World Championships in Kontiolahti, Finland; Paterson has numerous top 10 placements on the Canadian championship circuit as well.

Mussbacher, who will be attending his first Universiade to serve on the men’s hockey varsity health team, has been with the Golden Bears and Pandas varsity health team for five years after graduating from the Faculty of Physical Education and Recreation.

Gutsch, who has worked in communications and media relations for Golden Bears and Pandas Athletics since 2002, is making his second tour with Team Canada, having previously served on the communications team for the 2009 Summer Universiade in Belgrade, Serbia.