A lot of the techniques we have in computing science today and that everyone takes for granted were first developed for games. 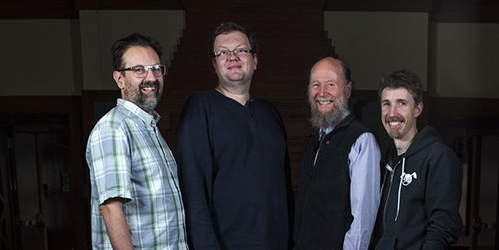 A group of computing scientists led by University of Alberta grads have developed the first computer Go program capable of professional-level play.

The new program, AlphaGo, was developed by the team at Google DeepMind led by UAlberta PhD grad David Silver and former UAlberta postdoctorate fellow Aja Huang. AlphaGo was able to achieve a 99.8 per cent win rate against other Go programs and defeated the human European Go champion by five games to zero—a feat previously thought to be at least a decade away.

The research has been published in Nature, with the paper citing a whopping 14 publications by University of Alberta researchers and alumni. Says Mueller, “I think it proves we're doing great basic science—it shows that we're at the forefront of research in this area.”

A new approach to an old game

Originating in China thousands of years ago, Go is still played today by millions of people worldwide, many in Asia. Given its enormous number of legal moves and possible games, Go has long been viewed as the most challenging of classic games for artificial intelligence.

To address these problems, AlphaGo introduced a new approach to computer Go that uses deep neural networks to evaluate board positions and to predict and select moves. The networks were trained by a novel combination of supervised learning from human expert games, and reinforcement learning from games of self-play.

“It's a complicated beast, and it's a big team effort. It's a lot of smart ideas, and on top of that, a lot of engineering and a lot of people—plus a lot of computational resources,” explains Mueller, noting that the best-performing version of the program is running on 1920 CPUs and 280 GPUs.

The University of Alberta is world-renowned for its work in artificial intelligence and games, which provide a technical base for other major applications in more generalized problems. “[Game research] has always been a driver of innovation,” says Mueller. “A lot of the techniques we have in computing science today and that everyone takes for granted were first developed for games.”

Mueller believes the research put into developing AlphaGo will be equally applicable. “Most of the techniques are not really Go-specific. They're general techniques which are then applied—of course, with a lot of engineering and a lot of fiddling parameters—to solve this particular problem of playing Go really well, but the potential of the algorithms is much larger than that.”

In March, the DeepMind team plans to pit AlphaGo against former Go world champion Lee Sedol to demonstrate whether the program is simply capable of professional-level play or if it is in fact equal or superior to top human players.  “Lee Sedol is a legend,” says Mueller. “If AlphaGo beats him, it will kind of settle the question.”