Pandas down Carabins 4-3 in nailbiter to capture second national championship. 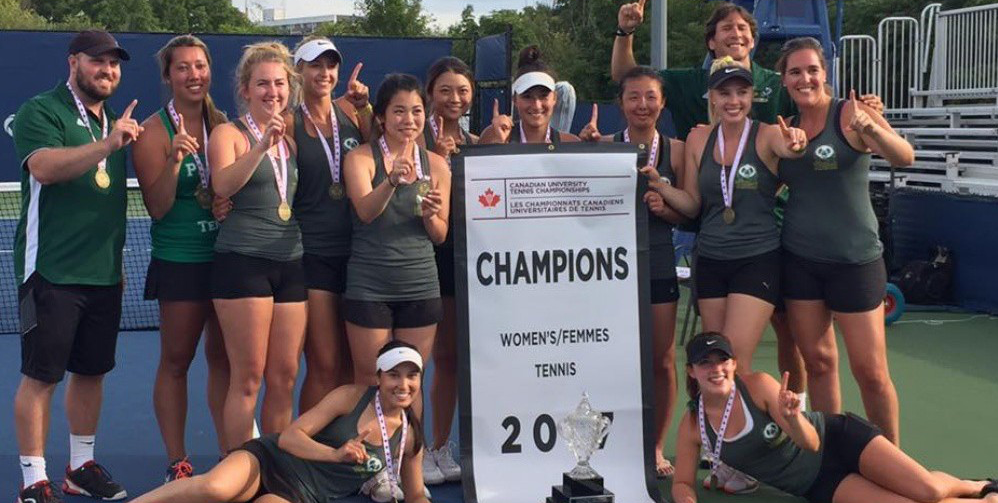 By MICHAEL BROWN and CONNOR HOOD

The University of Alberta Pandas tennis team held off the Université de Montréal Carabins 4-3 to capture the program’s second national title Aug. 13 at the 2017 Canadian University Tennis Championships in Toronto.

It’s the first championship for the tennis Pandas since 2014, and the U of A’s third national championship in 2016-17, following on the heels of titles by Golden Bears soccer and Pandas hockey.

The Pandas, who dumped Dalhousie University in the semi-final, opened the final by taking two of the three doubles matches to earn the lone doubles point. Maki Oba and Run Jia Gan upended their Carabins challengers 8-3, while Tournament MVP Kristina Sanjevic and Alina Jurca won five consecutive points to close out a tie-breaker 7-2 en route to an 8-7 win.

“There were many tight 'need to win situations' in the final, but we found a way to pull through,” said Sanjevic. “The doubles point was crucial to win so I'm glad my partner Alina Jurca and I were able to clinch the win to put us in the lead.”

Undeterred, the Carabins stormed back during the first half of the singles session, taking two out of three matches—save for Sanjevic’s straight-set win, her fourth victory of the weekend—to knot the championship up at two games a piece.

Third-year Panda Oba made quick work of her challenger 6-1, 6-3, to tie the final up at three after the Carapins’ Laurine Roussel won her second match of the day.

That left it up to Gan, who after losing the first set 5-7, roared back with consecutive 6-3 set wins to clinch victory for the Pandas.

“I'd be lying if I told you that at one point I wasn't broken down by the pressure,” said Gan, who admitted she may have been squeezing her racquet a little too hard when she dropped the first set. “But when the team came down from the platform and sat right beside the court, there was a change in my mentality. I remember saying to the team out loud, ‘I'm not sure if I can win, but I owe you my best tennis.’

“I was the last match played at the championships, but the win is on all of us. We really wanted the win, we were hungry for it, we trained so hard for it, and at the end of the day it was enough.”

Along with the team award, Pandas coach Ivan Quintero was named Tennis Canada’s university coach of the year.

This is the fourth-consecutive national medal for the Pandas, who followed up gold in 2014 with a silver in 2015 and a bronze in 2016. This is also the second-straight season the UAlberta Tennis program has claimed gold, following the Golden Bears triumph last year.

This year's edition of the Golden Bears, who also punched their ticket to Toronto by winning their fourth straight Prairie Regional Championship, salvaged a disappointing 4-3 semi-final loss to McGill with a decisive 7-0 win against Dalhousie to claim bronze.