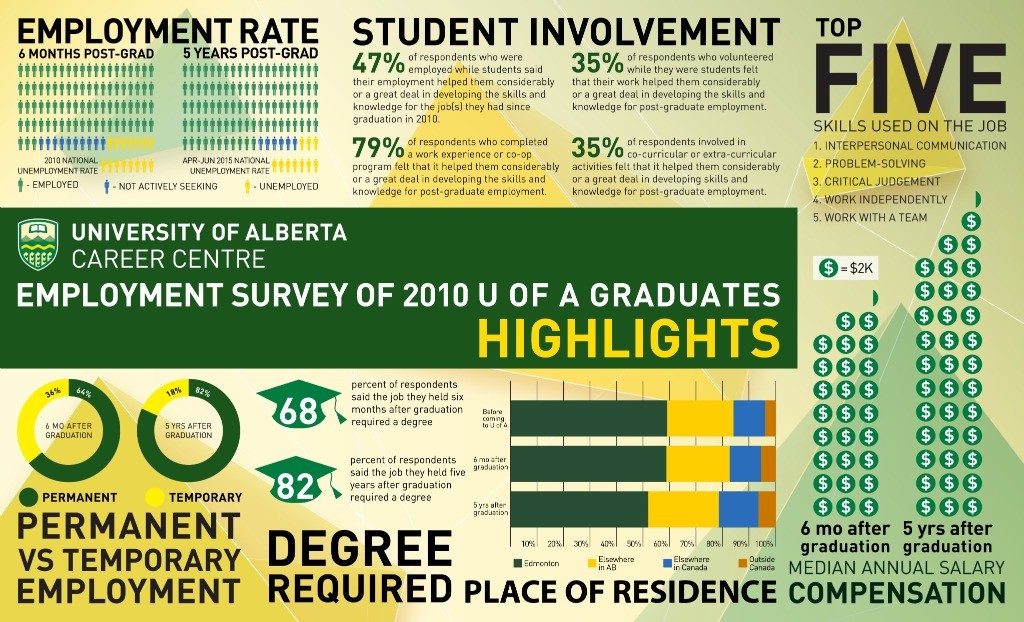 A recent University of Alberta survey of graduates in the workforce shows that their degrees are paying off.

An online survey conducted by the U of A Career Centre received input from 1,000 U of A graduates who earned degrees in 2010. The employment survey revealed several benefits to earning a degree, including lower rates of unemployment than national levels and rising salaries over the long term.

The surveys have been conducted by the U of A every five years since 1995, and have all shown consistent positive findings, said Joan Schiebelbein, director of the Career Centre.

“The most recent findings continue to confirm that a University of Alberta degree—and post-secondary education in general—deliver the skills and knowledge that students require in order to get what they want, which is a good job,” Schiebelbein said.

The Career Centre survey gathers valuable data that show future graduates the success degrees bring, how they can apply their learning, and effective skill sets graduates use to find work and then apply during the course of their careers.

“It provides us very concrete information from U of A graduates that we can pass on to current students.”

The poll revealed that within six months of graduation, 82 per cent of U of A alumni were working, with unemployment sitting at seven per cent, slightly lower than the national level of eight per cent in 2010. By 2015—five years after graduation—91 per cent of respondents were employed, with an unemployment rate of just under three per cent, well below the national rate of seven per cent.

As well, graduates earning an annual median salary of $50,000 to $55,000 six months after graduation experienced a 40 per cent jump in pay after five years, ranging from $70,000 to $75,000. And five years after graduating, 82 per cent were employed in permanent jobs—and of those holding temporary jobs, 78 per cent were in a term or contract position, as opposed to casual work.

The value of a U of A degree also held its own as graduates proceeded further into their careers, the survey showed. Six months after graduating, almost 68 per cent of U of A alumni reported that a degree was required for the job they were working in, but that figure jumped to 82 per cent for the positions they held at the five-year mark. As well, 72 per cent said the job they held for five years was directly or moderately related to their university program of study.

Soft skills fostered in degree programs are well used by graduates in the workplace, the survey indicated. The top three skills cited were critical thinking, interpersonal communication and problem-solving, which 90 per cent or more of alumni used frequently on the job.

Giving back to Alberta and Canada

“It shows how post-secondary education also benefits students when they are outside the classroom.”

The survey also indicated that those with U of A degrees are giving back to Alberta after graduation. Five years in, 52 per cent were employed in Edmonton, 25 per cent elsewhere in the province and 15 per cent in other parts of Canada.

“A lot of alumni are working in Alberta. They are staying here and using their degrees locally, supporting Alberta by giving back to the economy,” Schiebelbein said.

Their expertise is spread across several sectors. At the five-year mark, alumni were employed most frequently in one of four general areas: health care and social assistance (23 per cent); educational services (19 per cent), professional, scientific and technical services (18 per cent) and mining, quarrying, oil and gas extraction (eight per cent).

The survey also revealed that continuing education was important to alumni.

More than 40 per cent of respondents enrolled in post-secondary for-credit programs after earning their degrees in 2010, with more than half pursuing graduate studies. “As a society we talk about the importance of continuous learning, and our graduates are obviously following through on that, staying engaged in their own learning and development,” Schiebelbein said.