This is what you can do when you have great support from the department, the faculty and my colleagues, and great funding support. 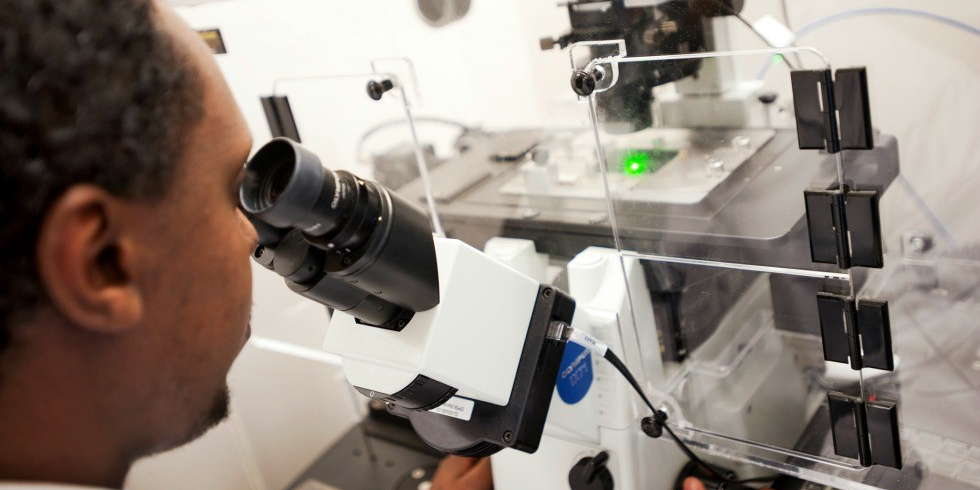 The solid oxide fuel cell, with its promise of low emissions and increased fuel possibilities, is within grasp, and the federal government has its money on the University of Alberta.

In particular, the Natural Sciences and Engineering Research Council of Canada (NSERC) homed in on the team led by Jingli Luo, whose work—often in collaboration with her Department of Chemical and Materials Engineering colleagues—has pushed the energy world to the brink of finding the holy grail of combustible engines.

Luo’s latest discovery grant, $300,000 paid out over five years, will build on the work of previous grants that have helped her look at ways to turn conventional fuel cells into chemical reactors.

In once instance, Luo says, she was able to use her NSERC grant to support a PhD student who developed a selective catalyst that aids the conversion of ethane to ethylene—a usable, low-emission fuel—right in the fuel cell.

“Normally, it takes an expensive separation process to purify the product, but this process has excellent selectivity, and it doesn’t produce CO2, which is a big advantage these days,” said Luo, who this week was named the Canadian Academy of Engineering’s newest fellow.

The discovery of this novel hydrogen-selective catalyst led to the invention of a high-temperature fuel cell that is able to burn carbon dioxide, oxygen and methane—the main component of natural gas—to create electricity, some water and carbon monoxide, which is a value-added feedstock for both food and petrochemical production, as well as the creation of, among others, medical applications.

“For one megawatt-hour of energy generated from our fuel cell, one tonne of CO2 will be consumed.”

So promising is this research that the project—which is co-led by Tom Etsell, a professor in the Department of Chemical and Materials Engineering who also received an NSERC Discovery Grant—is among 24 entries chosen from 344 submissions still in the running to receive one of five $3-million first prizes in the $35-million Grand Challenge: Innovative Carbon Uses competition held by the Alberta-based Climate Change and Emissions Management Corporation.

“This is what you can do when you have great support from the department, the faculty and my colleagues, and great funding support,” said Luo.

Also demonstrating the worth of consistent government funding is the U of A’s Centre for Particle Physics Major Resources Support Centre, or CPP+. The beneficiary of federal funding since 1992, CPP+ is an unheralded national resource based primarily at the U of A that comprises a stable of highly qualified engineers and technologists who support any experiments in subatomic physics.

“We have contributed to the vast majority of Canadian experiments in the subatomic physics envelope,” said James Pinfold, U of A physicist and CPP+ principal investigator, who received $660,000 for the program as part of the NSERC Major Resources Support Program – Subatomic Physics. “This group of experts, with their knowledge—which grows and grows each year—create a pool of supreme talent to enable us to make credible contributions.”

A few of the projects the team contributed to include the IceCube neutrino observatory at the South Pole, an upgrade to the ATLAS Experiment at the Large Hadron Collider (LHC) at CERN in Switzerland and construction of an acrylic vessel filled with argon to help SnoLab researchers look for dark matter as part of the DEAP experiment located in Sudbury, Ont.

“We build these things with no charge to the person as long as it is a good, well-predicated project. We are right near capacity but we haven’t had to turn anyone away,” said Pinfold. “This is a big success story for the U of A, which has been very supportive, and Canada.”

“This group of experts, with their knowledge—which grows and grows each year—create a pool of supreme talent to enable us to make credible contributions,” says James Pinfold.

CPP+ has also done work on another project that Pinfold is hopeful NSERC will one day throw its full weight behind: the Canadian-led MoEDAL experiment at the LHC.

“We came along with this experiment looking for new physics in a way that the LHC couldn’t do and hopefully expand the physics horizon of the LHC,” said Pinfold, who is the spokesperson for the MoEDAL experiment, which was approved in 2010.

With just 66 physicists from around the world, the MoEDAL experiment, which has researchers on the hunt for the magnetic monopole and other stable massive particles, is a relatively small experiment, which Pinfold says gives students a chance to “make a major splash.”

“Instead of being one of thousands of students with something like the ATLAS experiment, you would be one of dozens on the MoEDAL experiment,” said Pinfold. “It is not only important to train Alberta students in this field and get them contributing in a meaningful way, we need to exploit Canada’s leadership role in this experiment.”