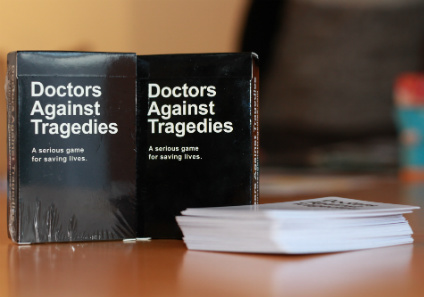 Doctors Against Tragedies is available as a no-filters adult version and a trivia-based version appropriate for high-schoolers. (Photo: Ross Neitz)

Based on popular Cards Against Humanity, new gritty card game reaches groups most at risk of opioid overdose in a way that speaks to them. 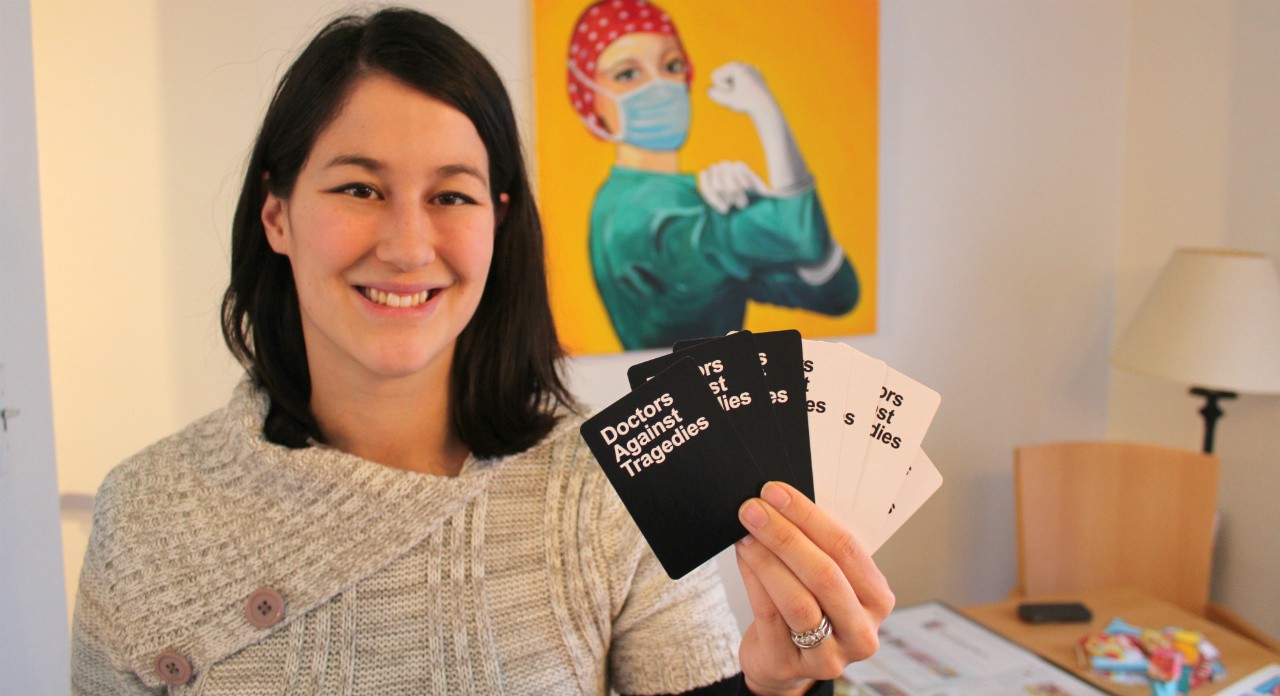 Michiko Maruyama and her team adapted the biting tone of "Cards Against Humanity" to a card game aimed at informing teens and young adults about opioids. (Photo: Ross Neitz)

Fentanyl-related deaths are hardly a game, but a medical resident and doctors in the University of Alberta’s Faculty of Medicine & Dentistry are betting that a hard-hitting, innovative card game can help raise awareness of the risk of opioid overdose and, ultimately, save lives.

“I’m part of the transplant team that deals with heart and lung transplants,” said Michiko Maruyama, a third-year cardiac surgery resident and the creator of the card game. “We have been noticing over the past couple of years that there’s been an increase in young donors because of the fentanyl overdose.

“It’s quite emotional—we’re very thankful that the family of the teenager or young adult has donated their organs, but at the same time, it’s very hard for us to harvest the organs of someone who was otherwise healthy but made one unfortunate decision that led to their death.”

Maruyama said they knew a “fear tactics” campaign wouldn’t be the best approach for their project, so she used her educational background and experience as a U of A graduate in industrial design to find an easy, approachable and attractive way for teenagers and young adults to talk about fentanyl.

“Fentanyl is a drug that we use at the hospital. It has many uses from general anesthesia to chronic pain,” she said. “We started to see the negative effects of fear-tactic campaigns with people coming into the hospital and not wanting to use fentanyl even if it was prescribed. That’s something we have to deal with as health-care providers. We wanted to create a campaign that shows both sides and be creative while doing it.”

Realizing that the card game Cards Against Humanity was very popular among young people, Maruyama contacted the creators of the game and obtained their permission to create a spinoff version centred on opioids called Doctors Against Tragedies.

It comes in two versions: a sharp, no-filter version for adults that resembles the tone of the original game, and a trivia-based version with more appropriate language for teenagers over 12 years old, which can be used in high schools.

Maruyama wrote the content of the cards in the adult version, and the team had physicians from across Canada and the United States review the accuracy and clarity of the information in both games. More than 200 doctors participated in the review.

In addition to the distinctive dark humour of the game, the cards include useful information like general facts about opioids and contact details for helplines and services related to overdose or drug prevention, according to Maruyama.

The not-for-profit game is available online, and both the youth and adult versions can be downloaded for free at DoctorsAgainstTragedies.com.

U of A students got a chance to play the game last month during the university's International Week. Future plans include distributing the game at public places throughout Edmonton, such as coffee shops and pubs, and incorporating an awareness campaign for elementary school kids through a spinoff version of the game Minecraft, with 3-D paper characters designed after the four doctors of the team.

Maruyama said that she hopes the use of the game spreads all across Canada and beyond to help people learn about opioids.