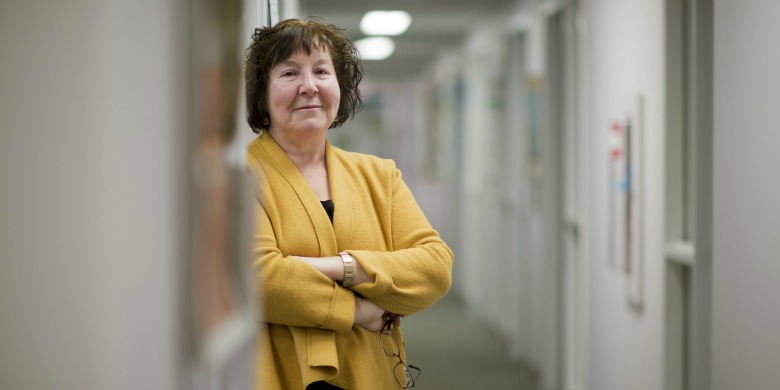 (Edmonton) Feb. 1, the day the provincial government unveiled new legislation that will help Albertans juggle jobs and caregiving duties, was a good day for University of Alberta researcher Janet Fast and her colleagues.

The Compassionate Care Leave Act amends the Employment Standards Act to provide Albertans with eight weeks of unpaid work leave to care for a gravely ill loved one, without risk of losing their jobs. The legislation became reality thanks to the dedication of Edmonton-South West MLA Matt Jeneroux, combined with years of research provided by U of A professor Janet Fast and a team of experts on aging.

“The legislation will help many Alberta families who are caught in the crunch of caring for ill or elderly family and friends, while also trying to hold down jobs. It’s a rare thing to see evidence-based policy-making in action and be able to say, ‘Hey, our research helped make that happen,’” said Fast, a professor in the Department of Human Ecology who researches the wide-ranging implications of an aging society.

The Compassionate Care Leave bill was championed by Jeneroux, who tapped a storehouse of research built over 15 years by Fast and the U of A’s Research on Aging, Policies and Practice team, to support the case for his private member’s bill.

“Mr. Jeneroux made sure he had the power of evidence behind his arguments. As University of Alberta researchers, it was exciting for us to share our knowledge, to be a partner in shaping policies that help people,” Fast said.

The bill was passed in 2012 and received royal assent in June 2013 before coming into force Feb. 1.

The information and advice provided by Fast, who is based in the U of A’s Faculty of Agricultural, Life and Environmental Sciences, played a key role in winning government and workplace support for the bill, Jeneroux said.

“It was great that Dr. Fast had the evidence that I needed and was willing to advise me on the key messages. It was easy to extract the ‘sound bites’ that helped me win the support of my legislature colleagues and the business community. Her help was instrumental in getting the bill passed.”

Fast and her team of experts on aging and caregiving trends—including fellow professor Norah Keating, RAPP research manager Jacquie Eales and numerous undergraduate and graduate students—drew on years of painstaking work, time spent combing through national survey data, publishing numerous studies and fact sheets, advising federal and provincial policy-makers as well as employers, and raising awareness about an issue that will, sooner or later, affect most North Americans.

Meeting with Jeneroux, Fast shared her thoughts on why caregivers need access to compassionate leave, how the law varies across provincial jurisdictions and how it is working in general. She also provided information on a working model in the United Kingdom, to help build a business case for the bill.

The MLA’s office was also provided with U of A research on the magnitude of the issue, which employees are most affected, and implications for employers.

U of A analyses of national statistics show, among other facts, that there are more than 2.3 million employed family or friend caregivers in Canada. More than 520,000 employed caregivers collectively missed 1.5 million workdays per month because of caregiving responsibilities. As well, more than 313,000 workers reduced their hours to provide care, collectively reducing their time at work by 2.2 million hours per week.

“The need to deal with the issue in the workplace is acute,” Fast said. She and the RAPP team continue to create research partnerships and projects that will build awareness and policy to deal with the caregiving challenges—and opportunities—that come with a rapidly aging demographic. Ongoing research will help them demonstrate to employers why it is important and profitable to pay attention to the needs of employees who are also caregivers.

“It gave them an opportunity to see how research becomes policy, and how their work as scholars can have real impact,” Fast said.

Being everything to everyone or being too hands-off are leadership styles that are more likely to lead to burnout in managers, according to a University of Alberta business study. “Depending on …
Read more from this release