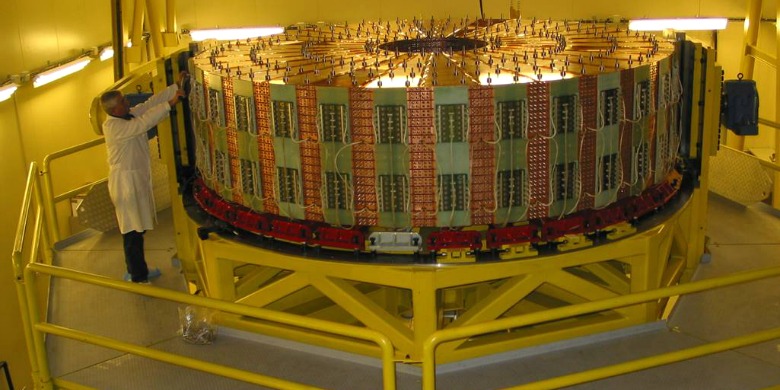 130320-atlas-higgsboson-banner
This hadronic endcap calorimeter is one of two standing at each end of the ATLAS particle physics detector. The stacked copper plates used to assemble the massive devices were machined at UAlberta. (Photo: ATLAS Canada)

“The Higgs boson is a fundamental piece of the DNA of the universe. Its discovery is the first giant step in answering the profound question, how is there something rather than nothing?” says James Pinfold, one of the U of A scientists who made the discovery possible.

The elusive particle has been the focus of an unprecedented international scientific quest to understand where we come from. Physicists at the U of A have played a key role in this discovery by providing their deep scientific expertise in the creation and evolution of the ATLAS collider at CERN.

Roger Moore, one of three U of A physics professors in the ATLAS collaboration, explains why scientists are closing in on proof of the Higgs boson’s existence. “We have a measurement of the spin of the particle that shows it is consistent with a particle with zero spin—which is really the crucial thing in determining that it is a Higgs boson. This makes it fundamentally different from every other particle discovered because all other particles have some spin. Particles with half a unit of spin give us matter; particles with one unit of spin give us force, like electromagnetism. Particles with zero spin give us mass.”

With 3,000 scientists from more than 30 countries offering contributions to the cause, the search for the Higgs represents one of the most intensive international scientific collaborations yet—a clear indication that this kind of collaborative spirit is the way for discoveries of the future as well.

“Being part of such important international research is critical to both fundamental and applied research because we can’t apply science that we don’t understand,” noted Mauricio Sacchi, chair of the Department of Physics. “Understanding the basic nature of how the universe works is at the heart of the next chapter in scientific research, and ATLAS will now turn to helping establish what type of Higgs boson has been found.”

The support of the university and the provincial government is crucial to this kind of success, said Sacchi. "This commitment to research will continue to attract a high calibre of faculty and graduate students to the University of Alberta to help answer the world’s big questions."

Moore says that with more revelations likely to come from further research, some of those big questions may not have been asked yet.

“Having now found the Higgs, there is a very real possibility that there is new physics just around the corner and we do not have a clear idea exactly what it is.”