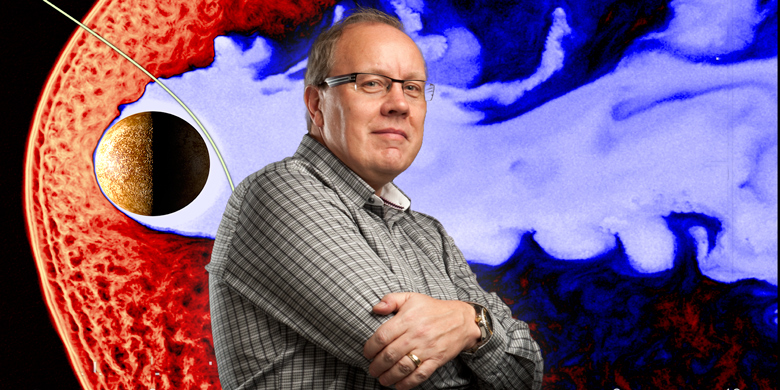 131002-robert-rankin-banner
Physicist Robert Rankin is leading a space physics team at UAlberta to develop computer models that will be hosted on a data portal for space scientists across Canada. (Photo: Richard Siemens)

(Edmonton) A leading University of Alberta physicist is taking space research to new heights as he teams with the Canadian Space Agency on major projects to advance understanding of the universe and build capacity in Canada’s space science programs.

U of A physicist Robert Rankin and his space physics team, working with the Canadian Space Agency, are embarked on two projects—one in co-operation with NASA—both just launched into space.

Rankin is leading the initiatives as principal investigator to develop space physics computer models that will be hosted on the Canadian Space Science Data Portal. The portal gives researchers from across the country access to space science analytic tools and data.

Under Rankin’s leadership, U of A researchers collaborated with the Canadian Space Agency to design a suite of software that will be used to locate and download data from CASSIOPE, a Canadian-made small satellite that launched into orbit Sept. 29. Data from the mission will be relayed back to the space science data portal, where scientists access the information. The Canadian Space Agency is also funding the U of A to make use of the data, Rankin noted.

“Our involvement in these far-reaching projects places the University of Alberta as a leading partner in furthering Canada’s scope and excellence in space science research,” said Rankin. “The work we are doing contributes to more efficient space exploration and may also help solve problems here on Earth, caused by space weather.”

CASSIOPE, launched on a SpaceX Falcon 9 rocket, hosts an Enhanced Polar Outflow Probe. Known as e-POP, this instrument package of scientific equipment measures electromagnetic fields and particle density in Earth’s ionosphere—the aurora created when solar particles mix with Earth’s atmosphere. The data collected will add to the understanding of how space weather affects satellites and sensitive ground-based systems on Earth, such as power grids. The software developed by Rankin and his team, called the Mission Planning Tool, will help researchers control e-POP’s delicate instruments and balance available power and memory on board the satellite, so that data can be successfully transferred back to Earth.

In a separate project, Rankin and his team are studying the dynamics of dust over the lunar surface, using data provided through NASA’s Lunar Atmosphere and Dust Environment Explorer (LADEE) project, launched into space Sept. 6.

In partnership with a LADEE mission scientist, Rankin and his group are developing models of how lunar dust works. The group, which has worked on other NASA projects, analyzes data gathered by the LADEE spacecraft.

The project follows up on observations of moon glow made in 1968 by Apollo astronauts. Rankin and his team play a role in revealing possible answers to the mystery by developing models of lunar dust to study the interaction of solar wind and the moon’s surface, in a quest to explore the origin of lunar dust storms.

The U of A team’s project proposal was one of only eight selected by the Canadian Space Agency for the LADEE project, which indicates how highly the university’s research is valued, Rankin believes.

“The fact that a leading scientist on NASA’s LADEE spacecraft is interested in what we have to say about the science returned by the mission is testament to the level of expertise we have at the U of A.”

The LADEE spacecraft is expected to collect data in lunar orbit for 100 days; the research results will be published in leading academic journals, Rankin added. The e-POP/CASSIOPE mission, about one year in duration, will see some of its research findings shared with undergraduate classes at the U of A, he added.