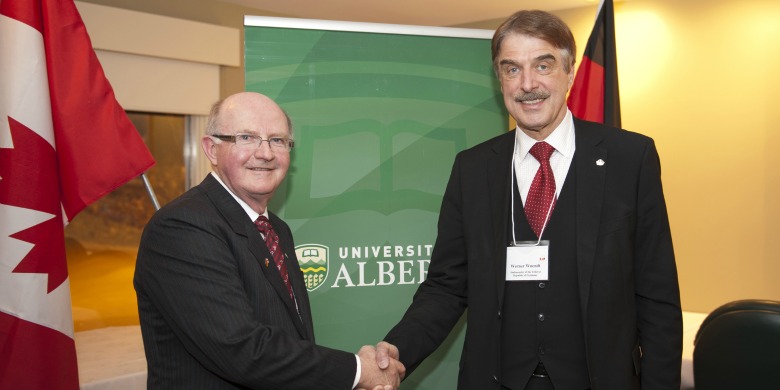 (Edmonton) Ambassador Werner Wnendt, Germany’s new envoy to Canada, visited the U of A Dec. 5, where he heard about some of the initiatives the university and his country are engaged in. He says the list of collaborations is impressive.

“From the presentations that were made, it’s obvious that there’s not only a close co-operation within the Helmholtz-Alberta Initiative (HAI) but there are all kinds of activities going on. This intensity and quality [of the relationship] is really a model for other universities.”

Britta Baron, the U of A’s associate vice-president (international) and vice-provost, was at the event, which brought together students, faculty and staff with connections to Germany. She says it comes as little surprise that a new U of A pilot program that fosters student mobility is being tried in Germany. She says the new University of Alberta International initiative, e-3 Berlin, is part of an effort to provide more U of A students with a study-abroad experience.

“We’re actively working on strengthening our education abroad in Germany,” said Baron. “But we hope to bring this module, which is flexible for students, to other countries as well.”

The HAI, German-Canadian Centre for Innovation and Research and German Academic International Network, are among flagship initiatives through which the U of A maintains a strong connection with Germany.

Lorne Babiuk, U of A vice-president (research), chaired the event, which he called an opportunity to bring together students, faculty and staff who help build the university’s relationship with Germany.

“Many of you have been instrumental in helping establish, maintain and nurture those relationships,” he said, noting the German embassy has been supportive of this burgeoning relationship.

Babiuk adds that although some of the initiatives that connect the university with Germany, such as the German-Canadian Centre for Innovation and Research, are situated at the U of A, they benefit the entire country: “We’re really privileged to have that nucleus of activity here.”

Stefan Scherer, managing director of HAI, said the program, which started in 2009 and currently has more than a 100 students and researchers involved, is being developed beyond its initial scope.

“We started with a focus on energy and environment, and within a few years, other interests have sparked,” said Scherer. “We’re now working with Helmholtz in other areas, among them health, such as infectious and neurodegenerative diseases, and a program to develop ecosystem monitoring and resource informatics.”

Some of these issues are also being addressed through the Worldwide Universities Network, within which the U of A is active in helping to address global challenges. Wnendt says the outcome of the university’s engagements with Germany will benefit other parts of the world.

There’s a vast range of issues which are considered to be global in nature—global challenges, not only to Canada and Germany, but to all countries,” he said.