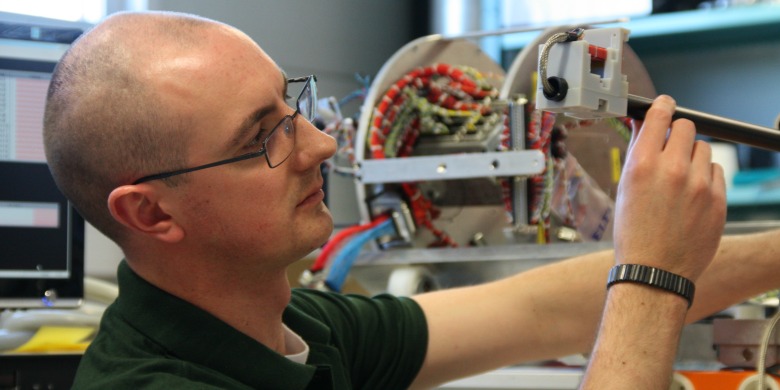 130927-david-miles-banner
David Miles travelled to Norway to prepare instrumentation for launch aboard sounding rockets this fall.

(Edmonton) For most people, the fall launch means watching new television shows. But this fall, University of Alberta physics grad student David Miles will be watching the launches of two space missions that carry instrumentation he helped create.

Miles, who also holds an engineering degree, was one of two authors of firmware for the MGF magnetometer on CASSIOPE/e-POP, which is scheduled to launch Sept. 29, aboard SpaceX’s Falcon 9 rocket. CASSIOPE/e-POP will be the first SpaceX launch from the Vandenberg Air Force Base in California.

The second launch takes place in Norway later this year. It will send up a sounding rocket that includes the Next Generation Fluxgate Magnetometer, an upgrade to the e-POP instrument.

“The two missions both target space physics and space weather, but they are investigating different phenomena and consequently are sent to very different places,” says Miles, whose research is supervised by U of A professor Ian Mann.

e-POP is studying a poorly understood phenomenon in which the Earth's atmosphere can suddenly upwell and start to bleed off into space, for example, during geomagnetic storms. The upwell seems to have a negligible effect on the atmosphere, but it increases the density of space near the Earth. “This causes satellites to suddenly drag against this upwelling, which can shorten the lifespan of satellites as they have to spend fuel to restore their orbit,” says Miles. “In extreme cases, this phenomenon causes satellites in orbit to jump significantly enough that they are temporarily ‘lost’ until ground stations can survey the sky and find the satellite again. e-POP is in an elliptical polar orbit in order to profile this phenomenon.”

After the e-POP launch, Miles will commission the on-board magnetometer and develop software to process the raw measurements into data that scientists can use. He is also working on an instrument for the Norwegian ICI-4 sounding rocket, scheduled to launch in November or December. “It is studying local irregularities in electron density, which interfere with GPS and communication signals, particularly in the north,” Miles says. “This occurs primarily at lower altitudes, which are impractical to study from a satellite due to atmospheric drag. The sounding rocket also gives vertical profiles, which aren't really possible from a satellite.”

Miles designed the ICI-4 instrument and built the flight hardware with the help of the Department of Physics electronics and machine shops and one external contractor. In August, Miles was at the National Resources Canada Geomagnetism Laboratory calibrating the instrument. He then went to Norway to integrate the final instrument with the sounding rocket. “Assuming that the instrument rocket passes the vibration testing in two weeks, I will meet the rocket in Svalbard in late November to prepare it for launch and help assess the launch conditions.”

The programs receive financial support from the Canadian Space Agency. The flight of the Next Generation Fluxgate Magnetometer on ICI-4 is undertaken by invitation of the University of Oslo.

Watch the launch of CASSIOPE/e-POP live