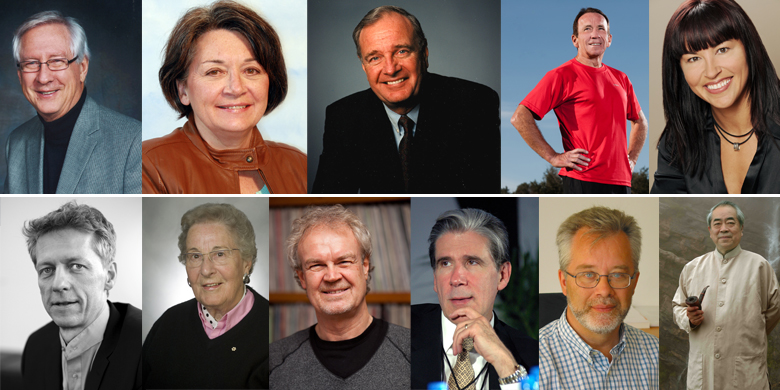 (Edmonton) The University of Alberta will honour 11 inspiring individuals with honorary degrees this May and June.

“A University of Alberta honorary degree recognizes exemplary achievements and outstanding service to society. Each of these recipients possesses a unique and remarkable combination of passion and leadership,” said U of A Chancellor Linda Hughes.

The following 11 recipients of the university’s highest honour will deliver addresses during convocation ceremonies in Edmonton June 5 to 13 and at a special ceremony in Beijing on May 26.

Donald Bruce Dingwell is a highly respected experimental volcanologist probing the behaviour of molten rocks and their impact on volcanic systems and volcanic hazard assessment. Chair in mineralogy and petrology at the Ludwig Maximilian University of Munich, Dingwell was recently elected secretary general of the European Research Council. A UAlberta alumnus and global academic citizen who has taught at five universities and in three countries and two languages, Dingwell is an elected member of the Royal Society of Canada and chair of the Section of Earth and Cosmic Sciences of the Academia Europaea, Europe’s academy of science, arts and letters. Honorary Doctor of Science degree – June 6 at 10 a.m.

Julio J. Frenk is an eminent authority on global health and a highly influential figure at the crossroads of scholarship and practice. Currently the dean of the Harvard School of Public Health, Frenk was one of the lead co-authors of “Education of Health Professionals for the 21st Century,” commissioned and published by The Lancet in 2010. He has served as minister of health for Mexico, executive director at the World Health Organization and senior fellow at the Bill and Melinda Gates Foundation. In 2008, he received the Clinton Global Citizen Award for transforming “the way practitioners and policy makers across the world think about health.” Honorary Doctor of Science degree – June 8 at 10 a.m.

A former vice-president of the Canadian Space Agency, Garry Lindberg played an integral role as project manager for the Canadarm, or Space Shuttle Attached Remote Manipulator System. Named one of the top 25 engineering wonders of Canadian science, the Canadarm was a success that enabled Canada to become a leader in robotics innovation. Lindberg also oversaw the creation of the Canadian Astronaut Program and played a key role in establishing the Canadian Space Agency in 1989. A UAlberta distinguished alumnus and a fellow of the Canadian Academy of Engineering, Lindberg also received a NASA Public Service Award and the Eadie Medal of the Royal Society of Canada. Honorary Doctor of Science degree – June 7 at 10 a.m.

The Right Honourable Paul Martin was the 21st prime minister of Canada from 2003 to 2006 and minister of finance from 1993 to 2002. As prime minister he signed agreements with the provinces and territories to establish a national early learning and child-care program and sought a historic consensus between Canada’s Aboriginal and non-Aboriginal peoples in the Kelowna Accord. As minister of finance, he erased Canada’s deficit, introduced the largest tax cuts in Canadian history and increased federal support for education and research and development. He currently leads the Martin Aboriginal Education Initiative and serves on the advisory council of the Coalition for Dialogue on Africa. Honorary Doctor of Laws degree – June 11 at 3 p.m.

James Jude Orbinski, former president of Médicins Sans Frontières/Doctors Without Borders, is internationally renowned as a physician, writer and advocate for social justice. He spent several years in the field with Médicins Sans Frontières in Somalia, Afghanistan, Rwanda and Zaire, and accepted the Nobel Peace Prize on behalf of the organization in 1999. An officer of the Order of Canada and chair and professor in Global Health at the University of Toronto, Orbinski is also co-founder of Dignitas International, a medical humanitarian organization dedicated to providing community-based care and improving the international response to HIV/AIDS and related illnesses in the developing world. Honorary Doctor of Laws degree – June 12 at 3 p.m.

Host of Natch’l Blues on CKUA Radio and Saturday Night Blues on CBC Radio One and Two, Holger Petersen is an award-winning broadcaster and co-founder/owner of the independent roots and blues music label Stony Plain Records. The label has earned 11 Juno Awards and six Grammy nominations. A founder and past artistic director of the Edmonton Folk Music Festival, Petersen was named a member of the Order of Canada in 2003 for his contributions to Canadian culture. In 2009, he was voted Best Public Broadcaster by the Blues Foundation in Memphis, the first time the award was presented to someone outside the United States. Honorary Doctor of Letters degree – June 13 at 10 a.m.

Chantal Petitclerc is the only Canadian athlete to have won gold medals at the Olympics, Paralympics and Commonwealth Games. She has taken home 21 Paralympic medals, 14 of them gold, and holds five world records for wheelchair racing. An ambassador for the international Right to Play organization, Petitclerc was Canadian athlete of the year and Canada’s female athlete of the year in 2008. In 2009 she was named a companion of the Order of Canada “for her achievements as a Paralympics champion known internationally as an inspiration, and for her commitment to developing sports for athletes with a disability.” Honorary Doctor of Laws degree – June 5 at 3 p.m.

Mary May Simon’s distinguished career has been devoted to advancing sustainable and equitable development in the circumpolar region. She was a key figure in the evolution of the Inuit Tapiriit Kanatami, Canada’s national Inuit organization, and has served as its president since 2006. Simon was Canada’s first ambassador of Circumpolar Affairs and also president and special envoy of the Inuit Circumpolar Conference. A former producer and announcer for the CBC Northern Service, Simon is also the founding chairperson of the Arctic Children and Youth Foundation, a charitable organization that advances standards of living, educational opportunities and health and well-being. Honorary Doctor of Laws degree – June 12 at 10 a.m.

President and founder of the Edmonton-based retailer the Running Room, John Stanton is an entrepreneur whose organization has inspired people across North America to pursue physical fitness and active lifestyles. What began in 1984 in an 80-square-foot space is now a 110-store, 1,300-employee leading retail operation recognized three times in the past five years as one of Canada’s 50 Best Managed Companies. Author of eight books on running and walking, Stanton has been honoured by the Order of Canada, the Canadian Retail Hall of Fame and the Canadian Medical Association Award for excellence in health promotion. Honorary Doctor of Laws degree – June 6 at 3 p.m.

UAlberta Professor Emerita Shirley Stinson is internationally recognized as a visionary leader in the development of nursing scholarship. A former senior administrator at Toronto’s Hospital for Sick Children, she was the first female and the first nurse to receive the federal designation of Senior National Health Research Scientist. An inspiring mentor to generations of nurses, Stinson was at the forefront of interdisciplinary course design and delivery. Chair of the first International Nursing Research Conference, former president of the Canadian Nursing Association and inaugural chair of the Alberta Foundation for Nursing Research, she has made contributions to clinical nursing practice and education that have improved standards of patient care around the world. Honorary Doctor of Science degree – June 7 at 3 p.m.

Professor Fan Zeng is a well-known Chinese painter, calligrapher and poet. A prolific artist and author, he is dean of the Chinese Painting Institute of Peking University, PhD supervisor of the College of Literature and the College of History of Nankai University, and PhD supervisor of the Chinese National Academy of Arts. Zeng was honoured as a UNESCO Special Consultant of Diversified Culture in 2009 and as Knight of the National Order of the Legion of Honour in France in 2010. He is an esteemed representative of the deep and rich Chinese artistic tradition, and many of his works may be found in the National Library of China and the Great Hall of the People in Beijing. Honorary Doctor of Letters degree – May 26 at a special ceremony in Beijing.