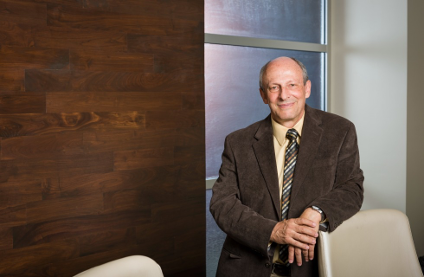 Geriatric people are often very much alive and want to keep living. If they lose their ability to read, that's taking away one of the few joys that's left in their lives.

UAlberta honouree fights for rights of others, without batting an eye

Ophthalmologist and bishop who advanced cause of visually impaired and LGBTQ one of 27 to receive Alumni Awards.

A University of Alberta graduate credited with sparking a significant “cultural change” in the Mormon church is one of five people who will receive the alumni community's highest honour—the Distinguished Alumni Award—at a ceremony Sept. 22. Donald C. Fletcher, ’80 BMedSc, ’82 MD, will be recognized in part for his work to welcome homosexual congregants to his church, even though his religion actively opposes same-sex marriage.

“I used to say, ‘Striped, spotted or whatever—gay—God loves us all. So absolutely, there’s no hesitation or qualifiers to that. You’re welcome here,” says Fletcher, whose award will also recognize his professional work as an ophthalmologist who helped tens of thousands of visually impaired people adapt to daily life.

While living in San Francisco, Fletcher served several times in leadership roles with The Church of Jesus Christ of Latter-day Saints, which relies heavily on volunteers to run its individual churches.

When his brother came out as gay, he realized there was a whole group within his church who had been largely forgotten.

“I have to be embarrassed to say it hadn't hit my radar screen before my brother came out. He raised my sensitivities and humanized the position of being gay,” Fletcher says.

Fletcher knew that coming out would be an enormous challenge for gay Mormons. The church was a strong supporter of California’s controversial Proposition 8, which defined marriage as between a man and woman only.

“A lot of gay Mormons felt that if they served their missions when they were 19 years old, they'd be cured of their gayness. But of course, they come back from the missions and they're still gay and they don't know what to do."

Fletcher wanted them to come to church in his ward, where attendance had slipped. (Only about 150 of an estimated 1,000 Mormons in San Francisco attended regularly.)

In 2011, Fletcher agreed to became bishop for the area. He asked openly gay Mormon Mitch Mayne to be his executive assistant. The pair wrote a letter to every absent congregant in the area, telling them they were welcome at church regardless of who they were—including sexual orientation.

“Mitch and I got all kinds of calls saying, ‘Do you really mean that? Is there a place for me?’ And we said, ‘Of course there is!’” Fletcher says.

Their unprecedented outreach made national headlines and Mayne, who writes regularly on LGBTQ issues in the Mormon church for The Huffington Post, says his former bishop faced plenty of criticism.

Still, gay congregants came back to church—not just in San Francisco but across the country. Mayne says Fletcher’s leadership spurred a national movement to involve LGBTQ people in the Mormon church, including at Pride marches, where participants hold signs with slogans like, “Sorry we’re late!”

“Bishop Fletcher has made Latter-day Saints history,” Mayne wrote in support of Fletcher’s Alumni Award nomination. “He sparked the largest cultural change the Mormon religion has seen in a generation.”

Mormons Building Bridges, a national movement to include LGBTQ people in the Mormon church, has marched in Pride parades across the United States. The organization has just wrapped up another festival season.

Fletcher says his decision to welcome gay congregants into his church was “truly one of the sweetest experiences of my life.”

”It's one of the most correct things I've ever done,” he adds, his voice cracking. “To the day I die, I’m going to keep pushing this cause to make sure that my brothers and sisters who are gay know that God loves them.”

Fletcher left San Francisco and his role as bishop in 2013 to move to Kansas where he now works as medical director for ophthalmology at the Envision Low Vision Rehabilitation Center in Wichita. He is widely considered an international expert in helping people with visual impairments.

It’s a status more than three decades in the making.

Fletcher’s path to help others through medicine was forged from childhood admiration of his father, U of A-trained Edmonton anesthesiologist Calvin Fletcher, ’44 BSc, ’46 MD. The younger Fletcher was good with his hands and excelled as an eye surgeon. In 1985, he landed a surgical fellowship that took him to the United States for the balance of his career.

Fletcher soon grew disheartened that surgery could not restore independence for his patients, most of whom are elderly and suffer from incurable, age-related eye diseases like macular degeneration and glaucoma.

Fletcher discovered that, despite advances in physical therapy for other parts of the body, very little had been done to help people adapt to their new realities after losing full sight—aside from magnifying glasses and other aids.

Fletcher became the first ophthalmologist to pair his visually impaired patients with occupational therapists who help people adjust every aspect of daily life to fit their disability. Visually impaired patients learn, for example, how brighter lights in their kitchens could help them read recipes or the temperature on a meat thermometer. They learned about the best dishware to avoid spills.

The father of five didn’t stop there:

While developing new treatments, Fletcher fought to make sure his patients were covered by health insurance. When he started his work, U.S. insurers paid for rehabilitation from skeletal or muscular disease or injury, but visual impairments were generally not covered.

“I suggested that it's really a kind of discrimination,” Fletcher says.

In 2004, after 15 years convincing private and state insurers one by one to cover rehabilitation for sight loss, the U.S. Medicare program, which provides health insurance to seniors and low-income people, agreed to cover low-vision rehabilitation nationwide.

“That’s one of my better career accomplishments. I might sneak a few brownie points in my heavenly scorecard on that one,” Fletcher says, chuckling.

But Fletcher feels his greatest professional satisfaction from improving the lives of his patients, who after three decades number more than 25,000. This year, their ranks include two women who are 101 years old.

“One little lady was so cute,” Fletcher recalls fondly. “She came in and said, 'Dr. Fletcher, you have to realize that when you're over 100, you slow down a little bit. You're not running races any longer. I've got more time for reading than I used to. But I don't have the vision for it.'"

Fletcher agreed to help her then asked, “How long do you plan to live? You're 101 now.”

“Well, at least till November,” she replied. “I want to see who wins the election.”

The University of Alberta Alumni Awards recognize the professional achievements, community service and innovation of graduates around the globe—people who uphold the promise to use their education “for the public good.”

“Dr. Fletcher’s endless optimism, courage, selflessness and innovation represent the very best of what a University of Alberta education can bring the world,” says U of A Alumni president Mary Pat Barry.

“We are so proud to have him—and all our award recipients—as part of our community.”

Other 2016 Distinguished Alumni Award recipients include:

An additional 22 people will be recognized in other Alumni Award categories, including Edmonton teacher Carla Cuglietta, ’01 BEd, ’01 BPE, whose surprise at learning she would receive an award was caught on video.

The 2016 University of Alberta Alumni Awards will be presented Thursday, Sept. 22, at the Northern Alberta Jubilee Auditorium at 7 p.m. To read biographies of all the recipients and to register for complimentary tickets, visit uab.ca/AlumniAwards

UAlberta honouree fights for rights of others, without batting an eye