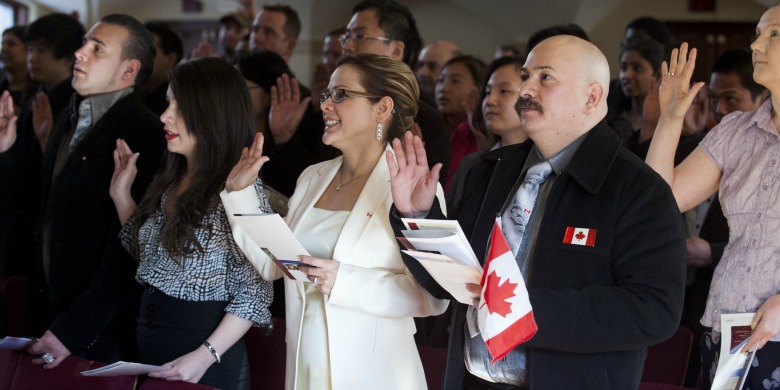 130312-citizenshipceremony-banner
About 70 people from around the world pledged to become Canadian citizens during a ceremony March 11 at Convocation Hall. The new Canadians also took part in roundtable discussions about challenges new immigrants face when coming to Canada. (Photo: Richard Siemens)

(Edmonton) The University of Alberta rose to the challenge as a civic leader when it played host to a ceremony welcoming new immigrants as Canadian citizens.

About 70 people from more than two dozen countries pledged to become citizens during a community citizenship ceremony March 11 at Convocation Hall.

“Today’s ceremony includes important opportunities to learn about and from each other, and it’s very fitting that we’re here in an institution dedicated to learning,” said U of A Chancellor Ralph Young during the ceremony.

One of those opportunities took the form of roundtable discussions, which were recorded by students in the U of A’s Community Service-Learning program. University officials including the chancellor and Lorne Babiuk, vice-president of research, chaired the sessions along with other community members such as former Alberta trade minister Dennis Anderson and Meheret Worku of the Africa Centre.

The discussions were a chance for established and newer Canadians to tackle challenges new immigrants face when they come to Canada, including questions such as the meaning of Canadian citizenship.

While welcoming the new Canadians, Tim Uppal, member of Parliament for Edmonton-Sherwood Park and minister of state for democratic reform, said they have joined a young country. “We welcome more newcomers than any other country in the developed world in proportion to our population,” Uppal said. “But we’re also an old country, founded in 1867; Canada is one of the oldest continuous constitutional sovereign nations in the world.”

The event brought together students, faculty and other university departments including University of Alberta International’s Global Education program and Community Service-Learning. It was organized by the Edmonton Community Citizenship Committee—a group that works with the Institute for Canadian Citizenship—to provide an enhanced citizenship ceremony experience.

“It’s an opportunity for new citizens to learn and share from each other in a way that they normally wouldn’t because they’d just get their certificates and leave,” said Abidah Lalani, a national program manager with the institute. “This university is an important landmark and we try to have ceremonies in places that are significant to the community. The university is also a good setting because this is a place of learning, and to associate that with citizenship is very important.”

Young said it was a chance for the U of A to serve as a civic leader. “One of the principal roles of the senate office is to be a bridge to the community, and part of our mandate is to provide outreach and be connected to the community, so this is a wonderful opportunity to connect with new Canadians and help them understand how the university is a vital part of the community.”

It was also a time to give back to the wider community, said Nena Jocic-Andrejevic, co-chair of the Edmonton Community Citizenship Committee.

“We’re showing the face of the university to the community. As a university we should have a face in the community, we should show our goodwill. A lot of us work here and we should give back and show that we’re giving back, in this way and in many other ways,” said Jocic-Andrejevic, who is also manager of gift planning with the U of A’s Faculty of Engineering.

More than two dozen students supported the ceremony in various ways, and Jocic-Andrejevic said they will publish a report from the roundtable discussions for the new citizens.

Ashlyn Bernier, president of the Graduate Students’ Association, who co-chaired one of the roundtable discussions, said it was a humbling experience. “I was born and raised in Alberta; I often feel, especially today, that I take for granted the opportunities, rights and responsibilities that I’ve been given as a Canadian citizen,” she said. “To be lucky enough to be born in Canada and to hear from newcomers to Canada how much they appreciate the opportunity to become a Canadian citizen makes me appreciate what I’ve essentially just been given.”

Nancy Hannemann, director of the Global Education program, said the university tries to provide students such experiences that deepen their academic experiences. “Students learn about the requirement of citizenship and discuss the process of the citizenship ceremony and make connections between theory and practice,” she said. “This enhances students’ experience by broadening their perspectives, which is what global education is all about.”