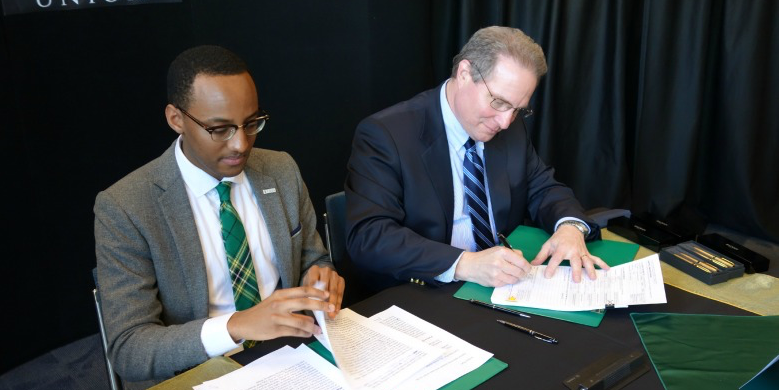 (Edmonton) In an effort to improve student mental wellness and academic success, the University of Alberta will be instituting a fall reading week beginning in 2015.

“Today we celebrate what is perhaps, in the 10 years I’ve been at the University of Alberta, the clearest example of all of those different groups coming together to define something that is clearly in the best interest of faculty, students and staff at the university,” said U of A provost Carl Amrhein, who along with outgoing Students’ Union president Petros Kusmu, signed the fall reading week into existence.

Scheduled to coincide with the Remembrance Day holiday in November, the fall break, dubbed “Green and Gold Week,” has been in the works for nearly four years after the Students’ Union, led by former SU president Nick Dehold, presented the idea to U of A administrators and began consulting with various campus stakeholders.

A series of campus consultations and resounding support from the student body, which voted overwhelmingly in favour of the fall break in a 2011 plebiscite, has culminated in the current proposal, which reflects a break that would involve the largest number of students. This proposal received unanimous support from Students’ Council and a ringing endorsement from the General Faculties Council March 24.

To achieve this goal, Kusmu says the week will not result in any reduction in instructional minutes for courses, while maintaining a semester start date that will not begin before Sept. 1.

Kusmu says the fall break will allow students to catch up with their studies, earn money to help pay for their education, visit with family and friends, and give students a break at a time when the university traditionally starts feeling the fallout of student stress.

“We are giving the students a break at a time when, frankly, we start seeing students get stressed out and we see some of the highest numbers of visits to our mental health centre,” said Kusmu.

“The fall break is not the silver-bullet solution to issues like student retention, student mental health or student engagement, but I feel it will demonstrate the University of Alberta is a national leader in supporting students’ success.”

He added, “It shows that this is a caring academy.”