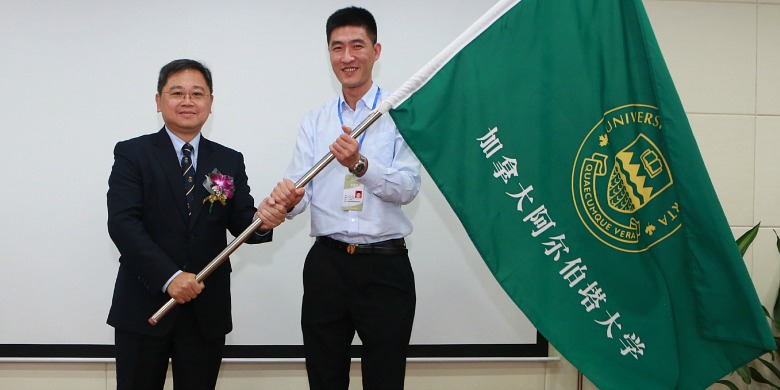 130923-mfm-in-china-banner
(From left) Trevor Mak ('84 MBA, '82 BCom), head of relationship management for Hong Kong, The Standard Chartered Private Bank, and MFM student Qi Zhuang ('07 BCom) hoist the University of Alberta flag that was presented to Xi'an Jiaotong University at the official launch of the MFM program in China.

(Edmonton) The University of Alberta has launched its first degree program to be offered internationally, thanks to a long-standing partnership with a university in China.

The U of A’s Alberta School of Business officially launched its master of financial management program Sept. 14 in Shenzhen, China. The announcement coincided with the school's new status as the 48th-ranked business school in the world according to the Academic Ranking of World Universities.

"The MFM program in China represents a significant strategic move on behalf of the Alberta School of Business and the university,” said Joseph Doucet, dean of business. “As the first University of Alberta program delivered abroad, it is a major milestone in the school's internationalization program and will provide the school with an effective platform to promote our excellence in China."

The MFM is a one-year program culminating in a degree from the U of A. It is operated in collaboration with Xi'an Jiaotong University, a 30-year partner of the Alberta School of Business in a relationship first established by professor emeritus Rolf Mirus.

The program in China will be delivered in English, with classes held on two consecutive weekends every month. U of A faculty teach the first weekend, and Xi'an faculty conduct tutorials and special topics on the second weekend. The one-week capstone course for the program will be delivered in Edmonton in October 2014. The MFM is also offered in Calgary, with plans to expand it to Shanghai as well.

A leader in international teaching, learning and research

U of A finance faculty include Randall Morck, Stephen A. Jarislowsky Chair in Finance and a specialist in international finance and Chinese corporate governance. Morck is also co-editor of Capitalizing China, published in 2012 by the National Bureau of Economic Research and the University of Chicago Press.

For more than 10 years, the Alberta School of Business has provided training programs for the China Academy of Governance. It is also an approved training base by the China Foreign Experts Administration Bureau for Chinese government organizations and institutions.

The U of A business school also offers students numerous learning opportunities in China, including international study tours and several exchange partnerships.