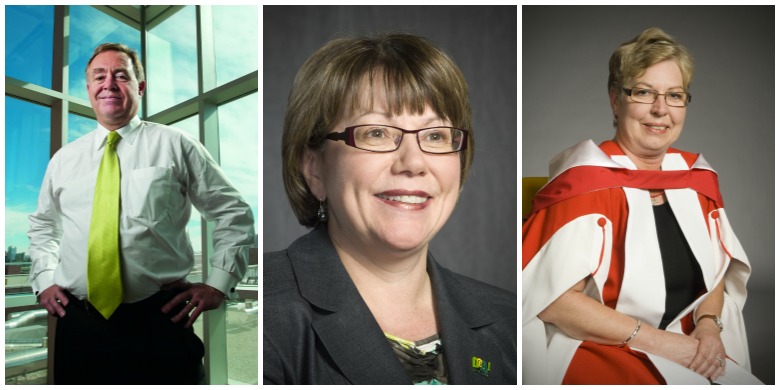 130524-order-excellence-collage-banner
(From left) Doug Goss, Anne McLellan and Catherine Roozen have been named to the Alberta Order of Excellence, the province's highest honour.

(Edmonton) Alberta’s highest honour will be bestowed on three leaders whose tireless contributions have advanced the province and the University of Alberta.

Doug Goss, Hon. Anne McLellan and Catherine Roozen are among eight Albertans set to join the ranks of the Alberta Order of Excellence this year in recognition of their diverse and long-standing contributions on the local, provincial, national and international stage.

“The Alberta Order of Excellence inductees for 2013 reflect the best traits the people of our province have to offer: innovation, determination and a deep-seeded commitment to serving others,” said Alberta Lt.-Gov. Donald Ethell. “I know that their stories and their many contributions will serve to inspire their fellow Albertans now and in the future.”

Doug Goss, U of A board chair and an alumnus of the university, said he was honoured to share this award with good friends Cathy Roozen and Anne McLellan, the latter of whom was his constitutional law professor at the U of A and a “great mentor.”

Goss, who received a business degree in 1981 and a law degree in 1984 from the U of A, has been widely acknowledged for his community service. Besides his leadership role with the U of A and many Alberta businesses, Goss has served on the board of the Hockey Canada Foundation and of B2ten, an organization dedicated to supporting Olympic athletes. He is a former board chair of the Edmonton Eskimos Football Club and of the Edmonton Oilers Community Foundation, served in leadership roles with NAIT and the Capital Health Authority, and was chair of the 2003 Molson Canadian Heritage Hockey Classic and the 2010 Grey Cup.

He added that being welcomed into the Alberta Order of Excellence was made possible with his decision to come to the U of A. “My education at the University of Alberta has been the foundation for everything I’ve been able to accomplish.”

Anne McLellan served four terms as the Liberal Member of Parliament for Edmonton Centre between 1993 and 2006, which included a two-year stint as deputy prime minister starting in late 2003. Prior to her political career, McLellan was appointed associate professor of law at the U of A in 1980. She also served as associate dean of law between 1985 and 1987, and as acting dean for a year beginning in July 1991. In 2006 she was appointed Distinguished Scholar in Residence at the U of A in the Alberta Institute for American Studies. McLellan was awarded an honorary doctor of laws degree by the U of A in 2007. In 2009, she was appointed an officer of the Order of Canada.

Catherine Roozen, who graduated from the U of A business program in 1977, has lent her extensive experience in board governance and investment banking to a host of community groups including the Grey Nuns Hospital, the Shock Trauma Air Rescue Society, the Alberta Cancer Board and the Mazankowski Alberta Heart Institute. She is currently vice-chair of the Alberta Health Services board and spent multiple terms on the U of A board of governors. She has also co-chaired U of A fundraising campaigns. In 2009, her alma mater awarded her with an honorary doctor of laws degree.

The lieutenant-governor of Alberta will preside over the investiture ceremony in Edmonton Oct. 16.