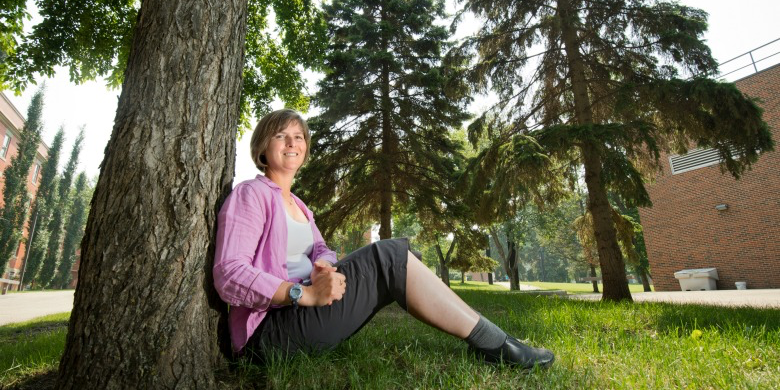 Janice Cooke leads TRIA-Net, a national research network that received $3 million from NSERC to further its work on stemming the devastating spread of the mountain pine beetle. (Photo: John Ulan)

(Edmonton) The federal government has given a University of Alberta-led research network of forest scientists and stakeholders a funding boost in hopes of turning the tables in its fight to protect Canadian forests from the spread of the mountain pine beetle.

Janice Cooke, a researcher in the Department of Biological Sciences, received a $3-million Strategic Network Grant from the Natural Sciences and Engineering Research Council of Canada to invest in her Turning Risk Into Action Network (TRIA-Net), an interdisciplinary team of scientists and forest practitioners from government, not-for-profit and industry organizations addressing the spread of the devastating forest insect.

Building on the strengths of the Tria research consortium that began in 2007, the collaborative network will use a novel approach that integrates genomics, molecular analysis, population genetics, systematics, ecology, population dynamics and modelling to improve our understanding of how mountain pine beetles interact with their pine hosts and the fungal symbionts that the beetles carry, how environmental conditions affect these interactions and how the genetics of these organisms may influence mountain pine beetle spread.

More than 19 million hectares of forest land in Western Canada have been affected by the outbreak, translating into losses of more than a billion cubic metres of mature pine trees, with losses to the forest industry, recreational opportunities, plant and wildlife habitats, watersheds and a range of ecosystem services.

A native to the pine forests of south central British Columbia, at lower density population levels, the mountain pine beetle has played an important role in lodgepole and ponderosa pine forest renewal. It’s only when populations reach epidemic levels that we see large-scale mortality of forests, says Cooke.

“This is exactly what happened during the first part of the 2000s, when conducive climatic conditions enabled mountain pine beetle population levels to soar to epidemic and even hyperepidemic levels in B.C.’s central interior,” she said.

By 2006, the mountain pine beetle had breached the Rocky Mountain barrier in a big way, flying long distances to establish in the Peace River District of northwestern Alberta. Here, the lodgepole pine that makes up much of the historic habitat for mountain pine beetle hybridizes with jack pine, a species whose range stretches all the way to the Maritime provinces. Given this fresh territory, it only took a few years for the mountain pine beetle to spread eastward across this hybrid zone in Alberta, successfully establishing in genetically pure jack pine and knocking at the doorstep of Saskatchewan’s northern forests. In the last couple of years, mountain pine beetle has even spread northward as far as the 60th parallel.

“These forests have not been considered part of the mountain pine beetle’s native range, and to our knowledge have not sustained an outbreak in recent history. This raises a lot of questions about how easily mountain pine beetle can spread and become established in these new regions, perpetuating the outbreak,” says Cooke.

The groundbreaking research to date by TRIA-Net researchers, and previously supported by Genome Alberta, Genome British Columbia and Genome Canada, has used innovative genomics strategies—the same sorts of approaches used in medicine—to uncover some of the mountain pine beetle’s deepest secrets. Breakthroughs include a detailed map of the beetle’s adaptation-oriented genome as well as the genome of some of the fungal symbionts that help the beetle colonize pine trees. The early research has also sequenced the genomes of lodgepole and jack pine, whose large genomes have made the work especially challenging.

“These ‘naïve’ trees do not share a co-evolutionary history with mountain pine beetle, so it’s possible that they may be at greater risk,” said Cooke. “Early data from TRIA-Net researchers suggest that jack pine trees may be more vulnerable. As mountain pine beetle moves ever deeper into new regions, these novel habitats present conditions that may differ considerably from the beetle’s historic range, making it difficult for forest health managers to predict risk and plan effective control strategies.”

“Mountain pine beetle is such an enormously complex problem, it requires a fundamentally different approach to create the new knowledge that is vital to controlling the spread of the beetle,” notes Cooke. “The support from NSERC will allow us to provide decision-makers with the information and tools they need to develop science-based policy to fight the spread of this devastating forest insect pest.”