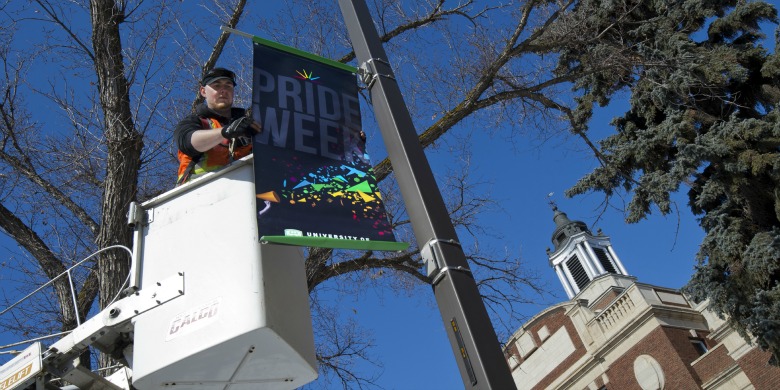 130312-prideweek-banner
Banners are flying on campus during Pride Week March 13-22 as symbols of the university’s commitment to inclusion of sexual and gender minorities. (Photo: John Ulan)

(Edmonton) A student steps off a bus onto the University of Alberta campus, looks up and sees black banners splashed with rainbow colours, hanging brightly on the light poles.

“It’s the first thing that person sees, and suddenly they don’t feel so scared and alone.” It’s that feeling of campus affirmation that Alexis Hillyard hopes becomes a reality for lesbian, gay, bisexual and transgendered students, staff and faculty as the U of A launches its first institution-wide Pride Week.

When the 10-day celebration of diversity kicks off March 13, the banners will be indeed be flying on campus as symbols of the university’s existing and ongoing commitment to inclusion of sexual and gender minorities.

“Those banners stand for so much more than just a donation from the university community (which came together to fund the flags); for students who have self-isolated, those banners are a gesture that will start to break that isolation,” said Hillyard, education co-ordinator for the U of A’s Institute for Sexual Minority Studies and Services (iSMSS).

Powered by iSMSS and sponsored by the U of A community and several Edmonton groups, University of Alberta Pride Week runs until March 22 and features a full roster of events designed to showcase the university’s initiatives and services for LGBT students, faculty and staff, and to celebrate them as valued members of the campus community.

“We want to increase the visibility and awareness of the good work and support that the University of Alberta already offers and is working towards. We have a good support system in place,” Hillyard noted.

That support includes OUTreach, a student support group for undergraduates on campus, and the Safe Spaces Initiative, built on the university’s promise that its campuses are safe spaces physically and emotionally for lesbian, gay, bisexual and transgendered faculty, students and staff. “Safe Spaces brings people into the mindset of awareness and increased attention to the issue of inclusivity,” Hillyard said. The Registrar’s Office is leading the way in its day-to-day work with students, making changes in office practices such as salutations in letters, removing the traditional ‘Ms.’ and ‘Mr.’ and going to first and last names.

“It is a small change, but it makes a huge difference.”

When the idea of a U of A Pride Week was circulated, support started to flow in from across campus, Hillyard said.

“As soon as we started telling people about Pride Week, it spread and everyone wanted to be part of it and help elevate it, because it is so uplifting. I’m hoping the event brings a sustained feeling of excitement and pride in the University of Alberta, that people come to our campuses and say this place accepts me and my friends, and it is a safe place to call home.”

U of A Pride Week events include an assortment of discussion panels for lots of shared conversation, a colourful campus parade, athletic events such as rainbow yoga, and guest speakers. Various events are supported by several sponsors from the U of A community and from Edmonton groups.

Here are some of the events on the roster:

Check the Pride Week website for a complete schedule of events.