UAlberta makes mark on global list of most cited

Toxicology professor one of seven researchers to earn spot among world's most influential. 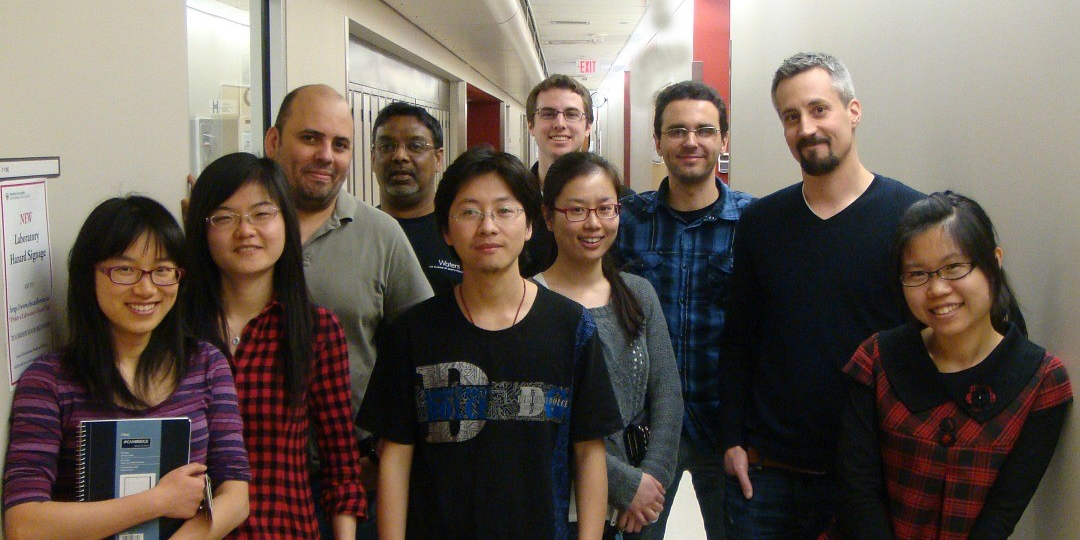 Jonathan Martin (second right) with the team he credits for helping him make the 2014 list of the world's most cited researchers.

(Edmonton) Jonathan Martin, a professor of analytical and environmental toxicology at the University of Alberta, was named one of the world’s most influential researchers in the 2014 Highly Cited Researchers list, compiled by Thomson Reuters.

The list is made up of researchers who wrote the highest number of research papers ranking among the top one per cent of most-cited papers by category and year, as indexed by the Web of Science Core Collection between 2002 and 2012. About 3,200 researchers were included in the list.

“Usually these lists are dominated by senior and well-established researchers, but this year’s list was calculated with some tweaks that created a level playing field for younger scientists like me to surface,” says Martin.

When the first rendition of the list was released in 2001, Martin was still writing his first papers as a PhD student in toxicology at the University of Guelph. He says his inclusion in the latest list was unexpected, to say the least.

Martin is one of seven U of A researchers to make the list, placing the university fourth among Canadian institutions.

“I think the highly cited list reflects mostly on research leadership and, for my part, the U of A has been a productive research environment with expert collaborators and the freedom to explore new curiosities as they arise,” Martin notes.

Martin’s work is focused largely in three areas. The most challenging environmental analytical problem he faces is examining the effects the oilsands have on neighbouring water, specifically tailings ponds. A second area of interest is understanding how the “complex chemical soup” of a mother’s blood affects the long-term neurodevelopment of her child, including cognitive function, motor function and intelligence. Finally, in an interest that began in the early days of his PhD studies, Martin examines the effects of perfluorinated chemicals on humans and the environment, and develops new analytical methods to identify these chemicals.

Martin says his earliest papers are cited most often, and increased attention to the oilsands has caused a recent surge in citations of his environmental contamination analyses. “I am fortunate to have worked on perflurorinated chemicals and oilsands environmental chemistry in the early days, so several of our papers have become classics that are cited almost routinely in the same field,” he says.

Although his name was the one included in the list, Martin is quick to acknowledge his graduate students and post-doctoral fellows—who, he says, perform all aspects of the research, from designing experiments to submitting articles—and insists that they “deserve more credit” for the individual works than he does.

“It is highly rewarding to see students publish and move on to become highly cited in their own right.”

In addition to Martin, the six other U of A faculty members included in the Highly Cited Researchers list are:

UAlberta makes mark on global list of most cited