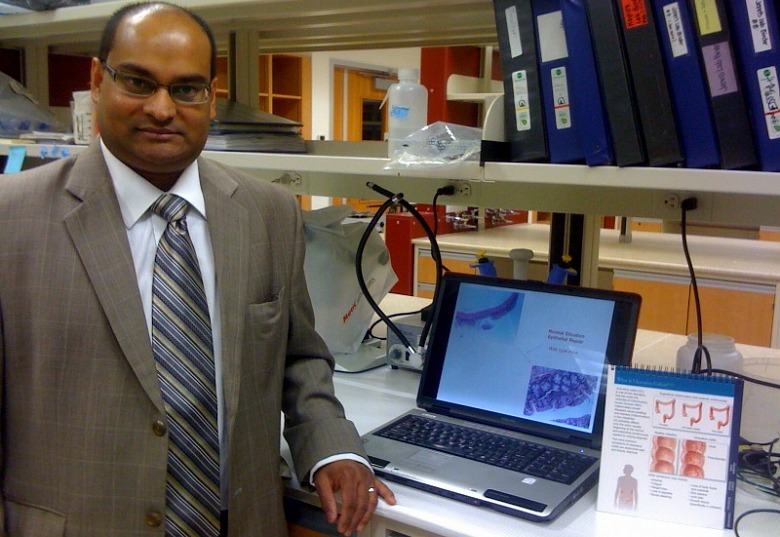 131023-shairaz-baksh-banner
UAlberta medical researcher Shairaz Baksh and his team discovered that a leukemia drug reversed symptoms of colitis in lab tests. The research could lead to new treatments for people with colitis and may even help reduce their likelihood of developing colorectal cancer.

(Edmonton) A drug currently on the market to treat leukemia reversed symptoms of colitis in lab tests, according to recently published findings by medical researchers with the University of Alberta.

Shairaz Baksh, a researcher in the Faculty of Medicine & Dentistry, published his team’s discovery in the peer-reviewed journal PLOS ONE.

His team discovered that a tumour-suppressor gene can also play an important role in the development of colitis. When this gene quits working or is missing, the inflammation process is triggered and the body loses its ability to repair damaged colon tissue. This leads to severe discomfort and poor recovery following bouts of inflammation. Persistent inflammation is prevalent in inflammatory bowel disease (such as Crohn’s disease and ulcerative colitis).

Baksh and his team wondered whether they could interfere with the inflammation process and encourage the body to repair the damaged tissue, so the disease would be less severe and patients could recover more quickly from any flare-ups. The team used a leukemia drug called imatinib (marketed as Gleevec), which has been on the market for years, to treat lab models with and without the tumour-suppressor gene.

“The treatment reversed the symptoms of colitis,” says Baksh. “We are on the cusp of a new treatment for this condition that affects 150,000 Canadians. We are pretty excited about the impact of this finding.

“Our findings also suggest we may have identified novel biomarkers for the appearance and progression of inflammatory bowel disease.”

His team is continuing its work in this area and has discovered that other drugs currently on the market have the same effect in reducing the symptoms of colitis in lab tests. He hopes to publish the new drug study results very soon, and suspects a new treatment for colitis could be a combination of two to three drugs already on the market.

A combination drug therapy would need to undergo further testing in the lab, but could go to clinical trials in about five years because the medications are already approved.

About 0.5 per cent of Canadians have colitis. The incidence is higher in Alberta than in other provinces, and studies are now underway to identify the hot spots in the province. Genetics, diet and environment each play an important role in the development of the disease. Symptoms include abdominal pain, rectal bleeding and weight loss. Patients with the condition have ulcerated and inflamed colons, which are shorter than average and cause a great deal of discomfort.

Looking into links between inflammation and cancer

Baksh examines the link between inflammation and cancer. About one-third of cancers start due to chronic inflammation, he says. For example, about 40 to 50 per cent of patients with ulcerative colitis (a form of inflammatory bowel disease) later develop colorectal cancer, those with chronic bronchitis are prone to developing lung cancer, and acute pancreatitis often leads to pancreatic cancer. Hence, there is a great need to understand how inflammation is a “pre-condition” for cancer, says Baksh.

His research was funded by Alberta Innovates – Health Solutions, the Hair Massacure and the Canadian Institutes of Health Research.

Tammy MacDonald, who founded the Hair Massacure fundraiser and helped fund this research, spoke of a young family member's diagnosis with leukemia in 2000—a diagnosis that would have been a death sentence at one time. “Today, due to ongoing research and clinical trials, the odds of beating many cancers have significantly increased. Still, we have not found a cure. We felt that continuing the journey of research will inevitably lead us there.

“Dr. Baksh is our chosen researcher. We are extremely thankful for his expertise, passion and accountability. Dr. Baksh's discovery and interest in colitis and inflammatory diseases, as it relates to pre-cancers, adds a more through approach to seeking proactive treatments that could prevent cancer.”