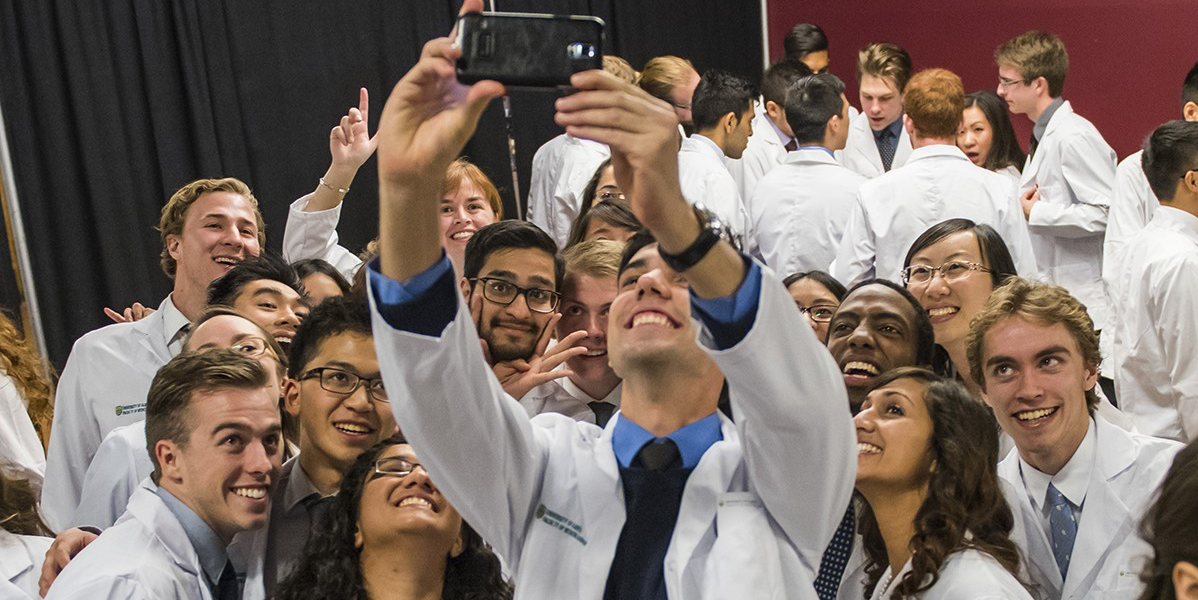 Students snap a selfie at the Dean's White Coat Ceremony.

The University of Alberta’s newest cohort of medical students is one step closer to their future professions as proud owners of white coats.

“I believe [the white coat] symbolizes a great privilege and trust to do good,” says first-year medical student Scott Anderson. Anderson has a bachelor of science degree (2013) in neuroscience and will soon receive a master’s degree in epidemiology, both from the University of Lethbridge. “Essentially, I see it as an outward expression of an inward commitment to practice with integrity and altruism.”

Anderson was one of 162 students to don a white coat for the first time at the White Coat Ceremony held in the Myer Horowitz Theatre on Oct. 6, 2014. The event is hosted annually by the dean of the Faculty of Medicine & Dentistry.

“Today we observe a tradition full of symbolism, a tradition that marks a rite of passage and one that our students have earned: the right to properly wear the mantle to be doctors in training,” Dr. D. Douglas Miller, dean of the faculty, said when he addressed the audience.

Up until now, I’ve had to jog my memory, like, ‘Oh yeah. I am in medical school.’ It’s finally setting in.” said Haakon Lenes, a first-year MD student with a bachelor of science in biosciences from the University of Calgary.”

The class of 1963 raised more than $30,000 to support the next generation of physicians.

“We wanted to do something to show our appreciation for everything that was done for us. We had wonderful teachers. We just had a wonderful time,” said Eric Schloss, the representative of the class of 1963.

“On the basis of that gift, we’ve raised over a million dollars over the last year for the White Coat Campaign, all of it from alumni and/or donors who are interested in assuring that [students] graduate with a minimum of student debt and that [they] are allowed to choose the careers that [they] want to,” Miller says of the gift.

This year’s keynote was Geneviève Moineau, president and CEO of the Association of Faculties of Medicine of Canada and active emergency pediatrician at the Children’s Hospital of Eastern Ontario. Her speech outlined the history of the symbolism of the white coat, the Hippocratic Oath and the Rod of Asclepius to the field of medicine, as well as moments from her own career.

“When I was 20-something as a medical student, the only way I could convince my elderly patients that I was a doctor was to wear my white coat with my name on it. In large font,” she said. “You are, as medical students, considered junior members of our profession. This is exemplified by the fact that you have or will register with the Royal College of Physicians and Surgeons of Alberta and that you already get asked by friends and family members to diagnose some of their illnesses. Society now paints you with a different brush.”

After receiving their white coats, students recited the Student Pledge, led by the dean, in front of their families, friends and future colleagues.

“I’m humbled at this opportunity, especially being the first person in my family to don the white coat,” says Abdul Raheem, a University of Alberta alumnus with an undergraduate degree in history. “I’m grateful to the faculty for putting this [event] on for us and reminding us once again that medical school isn’t just more school: it’s entry into a profession, and the ceremony just solidifies that.”

Donations toward the Dean’s White Coat Campaign can be made online.