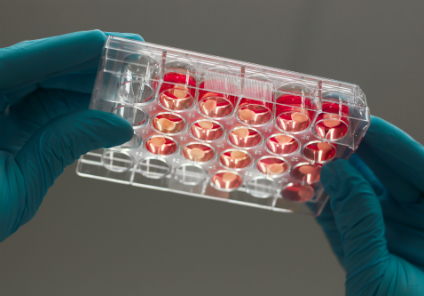 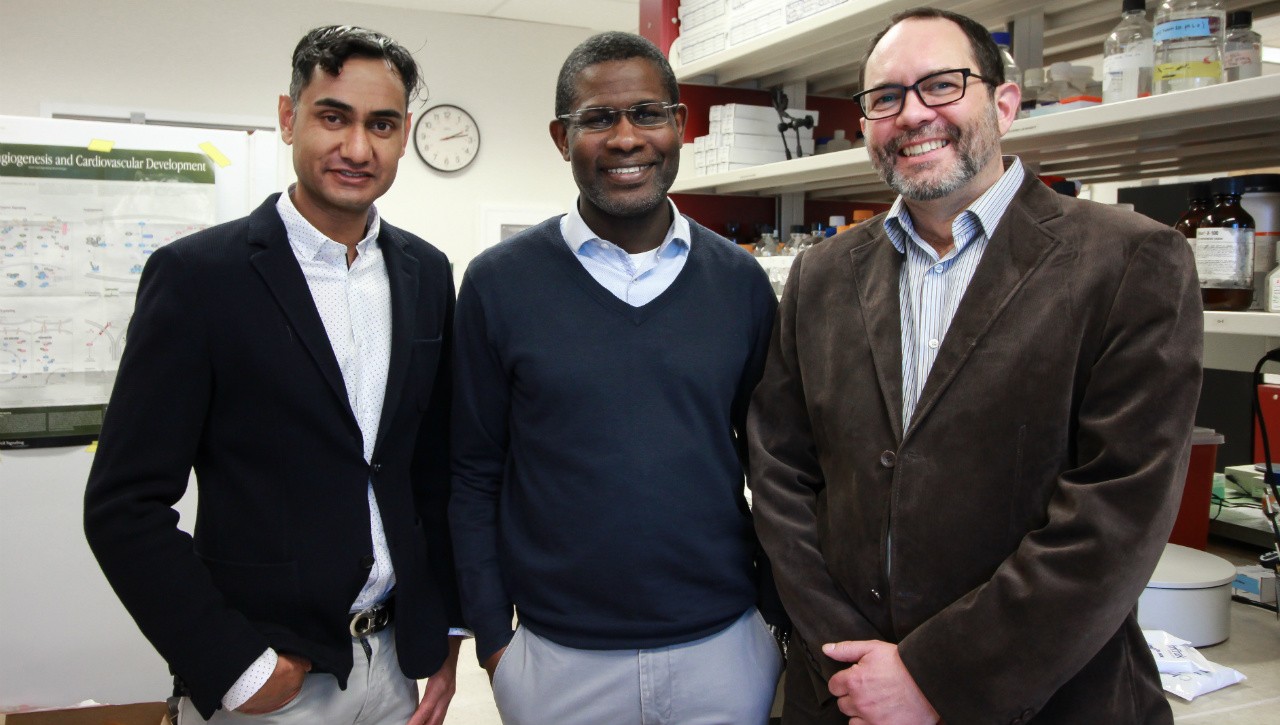 (From left) Surgery professors Khalid Ansari, Adetola Adesida and Martin Osswald engineered cartilage that can be grown from a patient's own cells and used for nasal reconstruction. (Photo: Melissa Fabrizio)

Facial reconstructive surgeons could soon have a safer, more accessible form of cartilage for nasal reconstructions, meaning fewer surgeries and less pain for patients, thanks to tissue engineering research at the University of Alberta.

The team conducting the research project used a clinically approved collagen biomaterial as a scaffold to grow new cartilage it can harvest and shape for patients who need nasal reconstruction.

“The vision is that the surgeon would simply take a small biopsy of cartilage from inside the nose and provide it to the lab,” said Khalid Ansari, an associate professor of surgery at the U of A. “The lab would manufacture the cartilage for the surgeon in the appropriate shape and size. The surgeon would then take that cartilage and insert it into the patient’s nose at the time of the operation.”

Nasal reconstruction is a relatively common surgical outcome resulting from skin cancer. In 2015, there were more than three million cases of skin cancer in North America alone. About one-third of cases occur on a patient’s nose, with treatment options often leading to loss of function and disfigurement.

“It’s a very traumatic event for the patient and comes with a high pathological cost,” said study co-author Martin Osswald, also an associate professor of surgery at the U of A. “They really can’t hide these defects; they are very obvious. Often these patients will not interact socially because they are embarrassed by their appearance. So the ability to help reconstruct a patient’s nose is really important.”

The procedure was tested with the assistance of six cartilage donors. The researchers harvested cartilage cells—known as nasal chondrocytes—from the donors and multiplied the cells in the lab. They then seeded the cells on a scaffold, growing new tissue in a bioreactor. The method takes about six weeks to generate enough new cartilage for a nasal reconstruction.

The engineered cartilage is superior in many ways to cartilage conventionally harvested from the body at sites such as a patient’s ribs or ear. Cartilage taken from the rib carries with it the risk of a potentially collapsed lung as well as possible infection—in addition to another surgery with longer recovery time for the patient. Rib cartilage can also undergo warping after nasal reconstruction surgery, meaning it may not maintain the shape the surgeon wants it to. Cartilage taken from the ear is also challenging in that it can become brittle and difficult for the surgeon to manipulate.

Engineered cartilage eliminates those deficiencies and could potentially supply unlimited quantities for surgeons. The U of A team says it can also be custom-made for the patient.

“When the surgeon ultimately needs to reconstruct a nose, we can virtually simulate that structure specifically for the patient,” said Martin.

“It’s kind of like when you go to the tailor to get your suit made,” added study co-author Adetola Adesida, an associate professor of surgery at the U of A. “We measure you based on the digital scans, and then we’ll basically just populate [the structure] with the cells.”

The researchers have yet to test their high-quality engineered nasal cartilage in human patients. They hope that within the next two years they can begin clinical trials to prove the efficacy of the cartilage in the operating room.

“I think the applications are just tremendous,” said Khalid. “To have an unlimited biocompatible source of cartilage that is immediately available in the operating room the minute you put the patient to sleep—it’s tremendous.”

Funding for the study, which was published in Scientific Reports, was provided through the Alberta Cancer Foundation Mickleborough Interfacial Bioscience Research Program and the Canadian Institutes of Health Research.