Ruth Kelly was deeply engaged in the community, advising graduands in 2016 to “Be curious. Be bold. Be kind.” 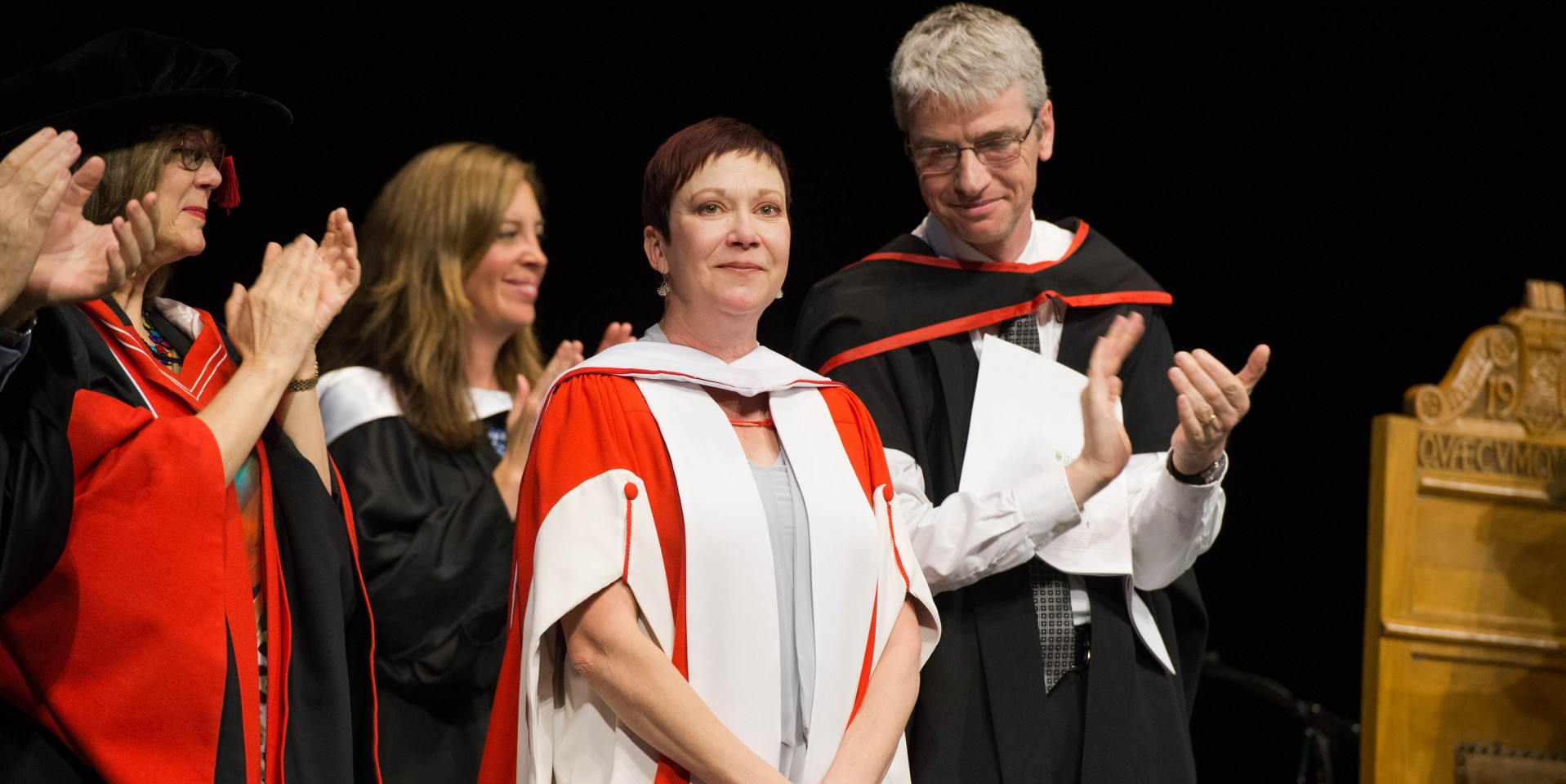 Ruth Kelly received an honorary doctor of laws degree from the University of Alberta in 2016. (Photo by Richard Siemens)

Ruth Kelly, a passionate Albertan who was a prominent member of the Edmonton business and philanthropic communities, and a deeply engaged alumna of the University of Alberta, died yesterday. She was 60.

Kelly, who was president and CEO of Venture Publishing, graduated from the U of A with a BA in English in 1978 and remained deeply involved with her alma mater throughout her career, serving as deputy chair of the board of governors and as a member of the Alumni Council. In 2016, she received an honorary doctor of laws from the U of A.

"Ruth Kelly served Edmonton, Alberta and this university with enormous spirit, infectious energy and unflagging enthusiasm,” said David Turpin, president of the U of A. "In addition to the many leadership roles she undertook throughout the broader community, she was a steadfast and active supporter of the U of A. She warmly welcomed my wife, Suromitra, and me to Edmonton and we will long remember her kindness. With the faculty, staff and students of the U of A, we extend our deepest sympathies to her family and friends."

Most recently, Kelly served on the Alberta School of Business’ Advisory Council.

"Ruth was a strong advocate for post-secondary education and a valued supporter of the Alberta School of Business," said Joseph Doucet, dean of the Faculty of Business. "As a member of the Business Advisory Council, Ruth provided leadership and vision as one of Alberta’s most influential business minds. An entrepreneur through and through, Ruth’s self-determination, drive and generosity of spirit inspired those around her and impacted the lives of so many members of our community. She will be missed."

Over the years, Kelly also worked closely with the Faculty of Arts.

“She was a passionate advocate for the value of an arts education and worked with us as we developed strong partnerships in the community to support student success,” said Lesley Cormack, dean of the Faculty of Arts.

Venture Publishing owned two of Alberta’s most-read magazines, Alberta Venture and Alberta Oil. A passionate storyteller, Kelly was a champion of Alberta businesses and the province as a whole.

She had also chaired the capital Region’s United Way campaign and had been president of the Edmonton Chamber of Commerce, among her numerous volunteering commitments.

Kelly’s list of awards and honours she received was also extensive.

In 2014, the Alberta Congress Board selected her as their Distinguished Workplace Leader award recipient. The year before that, she received the Queen Elizabeth II Diamond Jubilee Medal for her contributions to Canada while the Alberta Women Entrepreneurs awarded Ruth with their Celebration of Entrepreneurial Achievement recognition.

In 2012, on the occasion of Venture Publishing’s 15th anniversary, the Alberta Magazine Publishers Association awarded Kelly with a Lifetime Achievement in Publishing Award. The Canadian Women in Communications selected Kelly for their 2008 Woman of the Year award, making her the first Albertan to receive this national honour. She also received an honorary degree in business from NAIT that year. In 2005, Kelly was named the Allard Chair of Business at MacEwan School of Business. She was also recognized as a YWCA Woman of Distinction in the Entrepreneur category in 2003 and a Global Woman of Vision in 1998.