Twelve exceptional individuals will impart their wisdom to the university’s newest graduates this June. 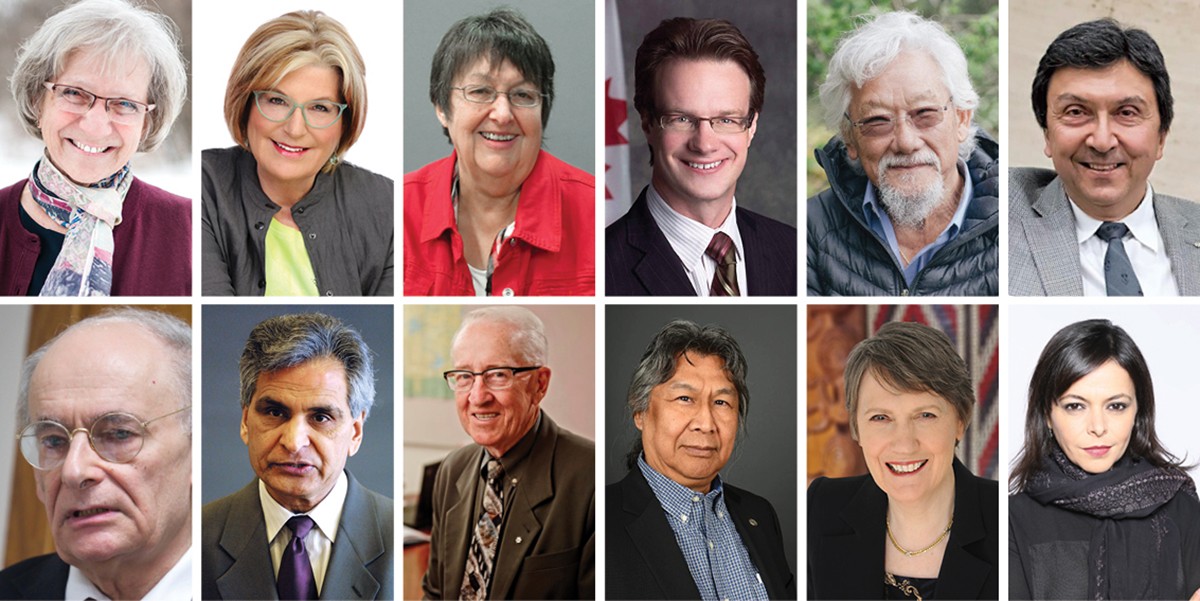 Canada’s most famous environmentalist, an award-winning CBC foreign correspondent and a former prime minister of New Zealand are among 12 exceptional individuals who will be awarded honorary degrees from the University of Alberta this June.

“An honorary degree is our learning community’s highest honour,” said U of A chancellor Douglas Stollery. “I look forward to hearing the perspectives of each of these inspiring individuals during our spring convocation.”

Nettie Wiebe has been an influential voice for equality, ethics and social justice for decades. A farmer, feminist, activist and champion of global food security, she served as president and CEO of the National Farmers Union of Canada from 1995 to 1998—the first woman to lead a national farm organization in Canada. She held prominent positions in La Via Campesina, a global organization that fosters unity and sustainable practices among small farmer organizations. From 1999 until retiring in 2015, she was also a professor at St. Andrew’s College at the University of Saskatchewan. Since 1976, she has managed an organic family farm with her husband and four children.

Nettie Wiebe will receive an honorary doctor of laws degree at the Augustana Campus convocation ceremony in Camrose June 3 at 2:30 p.m.

Louise Bradley has dedicated her professional life to improving Canadians’ mental health through advocacy, collaboration and public policy. As president and CEO of the Mental Health Commission of Canada, she oversaw the development of Canada’s first national mental health strategy and the world’s first workplace psychological safety standard. She has received the 2017 Humanitarian Award from the Canadian Psychological Association, the Innovation Award for Healthcare Leadership from the Canadian College of Health Leaders, and the Queen’s Diamond Jubilee Medal.

Louise Bradley will receive an honorary doctor of laws degree June 5 at 3 p.m.

As a professor, lyricist, historian, playwright and composer, France Levasseur-Ouimet has shone a spotlight on the vitality of francophone culture in Alberta throughout her career. She was instrumental in developing Faculté Saint-Jean as a centre of excellence in training teachers for French immersion programs and francophone schools in Western Canada. In 2002 she was inducted into the Ordre des Francophones d’Amérique, the government of Quebec’s highest honour, and in 2016 the Alberta Foundation for the Arts named her among the top 25 most influential artists in the province. Her choral piece “Je te retrouve/I remember you” was adopted as the U of A’s centenary song in 2008 and has been performed at every convocation since.

France Levasseur-Ouimet will receive an honorary doctor of letters degree June 6 at 10 a.m.

As a television personality and cultural ambassador, Mark Henry Rowswell (“Dashan”) has used humour and a deep respect for Chinese culture to bridge perceived divides between West and East. Famed for his proficiency in Mandarin and his mastery of the traditional comedic dialogue known as xiangsheng (“cross talk”)—he is a household name to more than a billion people in China—he has used his public profile to advocate for public health and social causes. He served as Canadian team attaché for the 2008 Olympics in Beijing and as Commissioner General for Canada at the 2010 World Expo in Shanghai, was appointed to the Order of Canada in 2006 and was named Canada’s Goodwill Ambassador to China in 2012.

Mark Rowswell will receive an honorary doctor of letters degree June 6 at 3 p.m.

David Suzuki is an award-winning scientist, broadcaster, author and activist whose devotion to promoting scientific literacy, which began in 1963 on the U of A television program Your University Speaks, has made him a Canadian icon. As host of the CBC television series The Nature of Things With David Suzuki since 1979, he is the face of environmental consciousness to generations of Canadians as well as viewers in more than 40 countries worldwide. Suzuki has been honoured with eight names and formal adoption by two First Nations for his support of Canada’s Indigenous peoples. He received the McNeil Medal from the Royal Society of Canada in 2001 and was named a companion of the Order of Canada in 2005.

David Suzuki will receive an honorary doctor of science degree June 7 at 10 a.m.

David Naylor has had a transformative impact on how medical and public health services in Canada are developed, delivered and led. His research on cardiovascular diseases has had a substantial impact on care for people with heart disease over the last 25 years. He was instrumental in the creation of the Public Health Agency of Canada and the appointment of Canada’s first chief public health officer. A former president of the University of Toronto, he chaired a federal review of support for fundamental science that resulted in significant new funding for health and scientific research in the 2018 federal budget. He was named a fellow of the Royal Society of Canada in 2004, a fellow of the Canadian Academy of Health Sciences in 2005 and an officer of the Order of Canada in 2006.

David Naylor will receive an honorary doctor of science degree June 8 at 10 a.m.

David Matas has devoted his career as a lawyer and scholar to advocating for human rights around the world. Currently serving as senior legal counsel for B’nai Brith Canada, he has maintained a practice in refugee, immigration and human rights law for nearly four decades, and has served with Canadian delegations to the United Nations and in numerous volunteer roles with organizations including Amnesty International. He also earned international acclaim for his research into organ harvesting from Falun Gong practitioners in China. He was named to the Order of Canada in 2008 and was nominated for the Nobel Peace Prize in 2010.

David Matas will receive an honorary doctor of laws degree June 12 at 10 a.m.

An alumnus and former professor at the U of A, Raj Pannu has lived by his belief that a university education should be used to serve the public good. After retiring in 1996 from a 27-year academic career in the departments of educational policy studies and sociology, he served as MLA for Edmonton-Strathcona from 1997 to 2008. As leader of the provincial New Democratic Party from 2000 to 2004, he laid the groundwork for political culture change in Alberta. As one of the first Canadians of South Asian descent to lead a major political party, he helped pave the way for a diverse new generation of politicians. In 2008, he received the Public Education Award from the Alberta Teachers’ Association.

Raj Pannu will receive an honorary doctor of laws degree June 12 at 3 p.m.

Ralph Haas is known in the engineering world as “the father of pavement asset management.” His pioneering concepts and technologies have resulted in better-performing, safer and less costly road networks. The author of 12 books and numerous technical articles on pavement and infrastructure asset management, he is also an educator whose students have become leaders in transportation agencies, consultancies and universities. Haas is a member of the Order of Canada, fellow of the Royal Society of Canada, fellow of the Canadian Academy of Engineering, recipient of the Queen’s Golden Jubilee and Diamond Jubilee medals, and U of A Distinguished Alumni Award recipient.

Ralph Haas will receive an honorary doctor of science degree June 13 at 10 a.m.

Stephen Kakfwi has devoted his life to advancing the Aboriginal land and self-government rights of the Northwest Territories, Dene, Métis and Inuit. He organized the N.W.T. Dene and Métis’s participation in the landmark Berger inquiry and then served as president of the Dene Nation from 1983 to 1987. He became an elected member of the N.W.T. legislature in 1987, serving until 2003, the last four years as premier. His major accomplishments include settling several land claims, developing and implementing an N.W.T. Protected Areas Strategy and playing an important role in the creation of Nunavut. He received the Aboriginal Achievement Award for Public Service in 1997 and the Governor General’s Northern Medal in 2012.

Stephen Kakfwi will receive an honorary doctor of laws degree June 13 at 3 p.m.

Helen Clark served as prime minister of New Zealand from 1999 to 2008. Under her leadership, the government pursued policies aimed at reducing inequalities, protecting the environment, fostering arts and culture, and settling historical grievances with indigenous people. From 2009 to 2017, she was the administrator of the United Nations Development Programme, which focuses on promoting sustainable development around the world. She continues to engage widely in public policy debate globally, including as a member of the Global Commission on Drug Policy, which advocates for evidence-based policy. She is a member of the Order of New Zealand, her country’s highest honour.

Helen Clark will receive an honorary doctor of laws degree June 14 at 10 a.m.

One of Canada’s most respected foreign correspondents, Nahlah Ayed has reported the human impact of global events, particularly in the Middle East, for more than 15 years. Born and raised in Canada, of Palestinian heritage and fluent in English and Arabic and functional in French, she’s gained access to people, places and events that would otherwise go unheard and unseen—sometimes putting her safety at risk to tell their stories. Her work has been repeatedly recognized, including a Canadian Screen Award for coverage of Europe’s refugee crisis, a UK Foreign Press Association award for reportage on child labour in India, and a photojournalism award for work on board a ship rescuing asylum seekers at sea.

Nahlah Ayed will receive an honorary doctor of laws degree June 14 at 3 p.m.