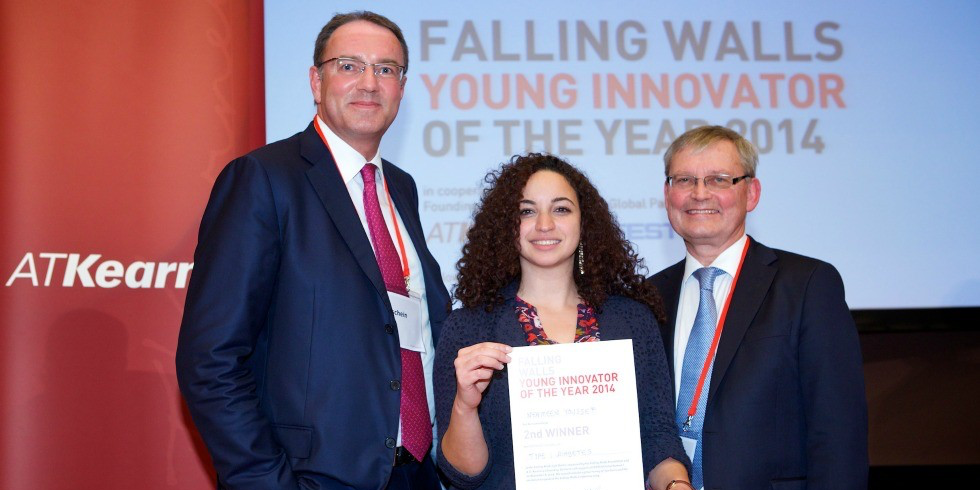 A PhD student at the University of Alberta has shown the world why the U of A is a global leader in diabetes research, taking second place in an international competition showcasing the next generation of outstanding innovators.

Nermeen Youssef, a fifth-year PhD candidate in the Department of Pharmacology and researcher in Peter Light's lab in the Alberta Diabetes Institute, was one of three U of A contestants who presented their revolutionary ideas at the Falling Walls Lab finale Nov. 8 in Berlin, part of an international conference held during 25th anniversary celebrations of the fall of the Berlin Wall.

In her presentation, entitled “Breaking the Wall of Type 1 Diabetes,” Youssef pitched her idea of using blue light to stimulate engineered fat cells to secrete insulin—an idea that could lead to needle-free management of Type 1 diabetes.

“I am originally from Egypt and moved to Canada for my PhD,” said Youssef. “Coming to the U of A offered a fantastic opportunity to train under and collaborate with world-class researchers.”

The U of A was one of only 20 sites worldwide chosen to host qualifying competitions for the Falling Walls Lab. The Dragon’s Den-inspired idea pitch contest saw 20 U of A qualifiers present their ideas, discoveries and projects to a panel of judges.

Youssef, who also won second place at the U of A qualifier, joined engineering post-doc Zack Storms and chemical engineering PhD student Diana Martinez Tobon in representing the university at the Berlin finale. In all, 100 applicants from 38 countries, culled from more than 1,000 entrants, gathered in Berlin to pitch their ideas to an 18-member jury headed by Carl-Henrik Heldin, board chair of the Nobel Foundation.

Nermeen Youssef presents her research on "Breaking the Wall of Type 1 Diabetes" at the Falling Walls Lab qualifying competition at UAlberta in September. Youssef went on to win second place at the worldwide Falling Walls Lab finals Nov. 8 in Berlin.

Watch all presentations from the UAlberta Falling Walls Lab