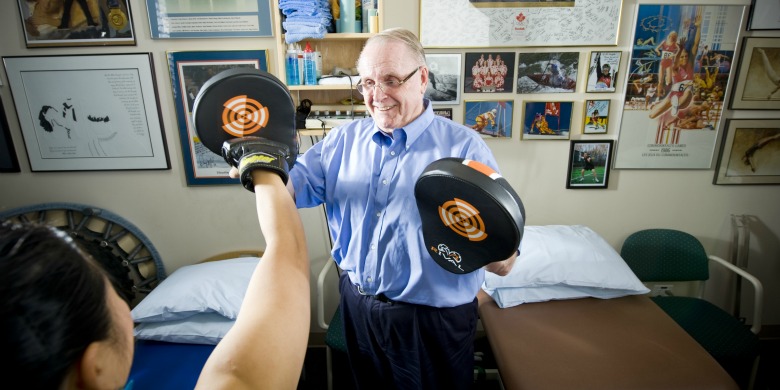 130104-davidmagee-banner
UAlberta's David Magee was recently named to the Order of Canada for his remarkable career in physical therapy, including his work with elite athletes across the country.

(Edmonton) The University of Alberta’s David Magee has enjoyed his share of accolades during a remarkable career in physical therapy, including three Stanley Cup rings, a Grey Cup ring and a namesake endowed chair at the U of A. He can now add membership in the Order of Canada to the list.

Magee, a professor in the Faculty of Rehabilitation Medicine, was among 91 Canadians appointed to the Order of Canada. Receiving one of the country’s highest civilian honours isn’t something one envisions at the start of a career, he says, and when he received a call on Dec. 30 about his appointment, it came as quite a shock.

“It’s a good thing I was sitting down. I was a little flabbergasted when I heard,” says Magee. “I don’t know whether I’m the right person to be given something like that—obviously somebody thinks I am—but I do very much appreciate the honour. It’s very humbling to be given the Order of Canada.”

The appointment is the latest honour for Magee, a world-renowned physical therapist, author of the acclaimed Orthopedic Physical Assessment, and one of the longest-serving faculty members in rehabilitation medicine. He’s worked with elite athletes across the country, from the national synchronized swimming team to the Edmonton Eskimos to 26 years with the Edmonton Oilers, including the team’s Stanley Cup glory years.

“To be given those rings and to have your name on them, nobody can take that away from you.”

Magee has seen tremendous change in sport during a career that started humbly in the late 1960s as a manager and team trainer for the hockey team at Lakehead University, where he studied history and political science.

“I didn’t know anything really,” he says about being a team trainer, “so I started reading books about it. I realized if I wanted to be an athletic trainer or sports trainer, I had to become a physio. The place I wanted to come was the University of Alberta.”

The Green and Gold years

A major factor in his decision was the chance to work with legendary Golden Bears coach Clare Drake, who at the time coached the hockey and football teams—both top-ranked in the country. Magee worked as assistant trainer for five years alongside Ray Kelly, “who was a great mentor to me.”

In those early days, athletes were never given water during the course of a game, which today we know “is physiologically, just totally wrong,” Magee says. Anterior cruciate ligament tears meant weeks or months in a cast, instead of immediate rehabilitation.

“They wondered why they had so much trouble, but way back 40, 45 years ago, that’s what they did,” he says. “Everything today is much, much more scientific.”

Magee went on to earn a diploma in physical therapy in 1971 and a bachelor’s degree in 1972, the same year he joined the faculty in the Department of Physical Therapy. After earning a master’s and PhD in physical education, sport science, he would go on to chair the department from 1980 to 1993.

Magee served as an associate dean from 1993 to 2011, overseeing a critical transformation of rehabilitation medicine’s professional entry programs in physical and occupational therapy, and speech-language pathology. Martin Ferguson-Pell, who left his position as dean to serve as acting provost for the U of A, called it a “landmark period for these programs in the province”—the only ones of their kind in Alberta.

“That was a complex set of changes that, in his usual style, Dave led seamlessly,” he says.

Ferguson-Pell also credits Magee for being “instrumental” in creating satellite programs in Camrose and Calgary where, through technology and hands-on learning, students receive the same instruction as peers in Edmonton.

In 2010, a $1.5-million donation from one of Magee�s patients led to creation of the Dr. David Magee Endowed Chair in Musculoskeletal Research—rehabilitation medicine’s first endowed chair.

“Dave is a passionate teacher and he has always been focused on outstanding outcomes in terms of student learning experiences,” Ferguson-Pell says.

Since 2011, Magee has served as a dean’s fellow overseeing the move of the Glen Sather Clinic to its new home in the Kaye Edmonton Clinic. He’s responsible for transforming the clinic from a straight sports-medicine focus to one that incorporates musculoskeletal clinical services with research and scholarship.

Magee says the work is complex and won’t be finished for a few years, but it represents a huge opportunity for innovation. As has been the case throughout his career, faculty leadership has been tremendously supportive of his efforts.

“Everything I’ve done, I’ve had a lot of people who have been very supportive of me in my career. It’s thanks to them that I am where I am.”