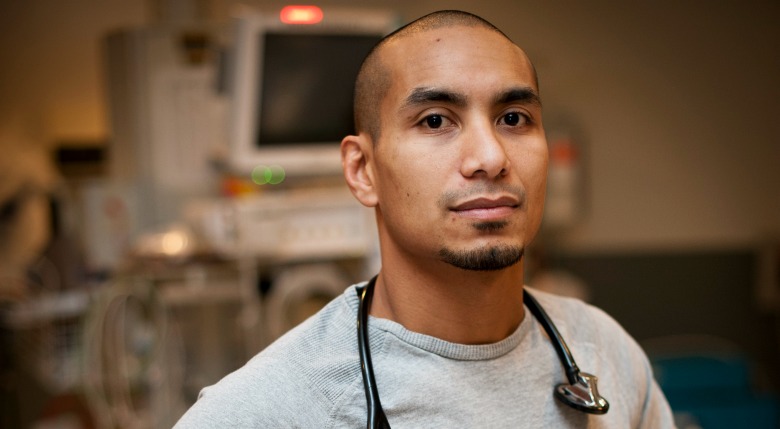 131122-rashad-chin-banner
Rashad Chin is leading a team providing medical care and disaster assistance in the Philippines.

(Edmonton) On Nov. 8, Typhoon Haiyan—the most powerful storm ever to hit land—struck the Philippines. Within 10 days, Rashad Chin was on a plane headed there to lead a team providing medical care and disaster assistance.

The clinical faculty member in the Department of Emergency Medicine and recent graduate of the Faculty of Medicine & Dentistry’s emergency medicine resident program is part of the first medical unit from Canadian Medical Assistance Teams (CMAT) deployed to the disaster zone. Chin is also an attending emergency physician at the University of Alberta Hospital.

Chin departed Edmonton in the early hours Nov. 18 to join the rest of his team in Vancouver, arriving in Cebu City, Philippines, early in the morning Nov. 20. A four-member assessment team from CMAT is already in the Philippines co-ordinating with the United Nations, Red Cross and other aid organizations to determine the region’s most pressing needs. To date, more than 4,000 people are confirmed dead and more than 1,600 are still missing. Many thousands have been injured.

As response co-ordinator for CMAT, Chin spent the last few days before mobilization assessing volunteer requests and determining the makeup of the teams. “There are over 1,000 people on our email list and many more expressing interest on social media in going to help,” said Chin. “I have to sort through all those requests to determine their qualifications, what specialties are needed the most and what supplies are needed the most.”

And that is only the beginning of Chin’s duties. Once he arrives in the Philippines, he will be part of the team providing medical care to those who need it the most. In the midst of frenetic preparations for the mission, Chin struggled to put into words what it is like to work in a disaster zone.

“There are so many different emotions that describe the complete sense of what it’s like to be a relief worker in such devastation,” he said. “But even after the first couple of days of a mission, many things that you face with health care just fall away. There is less politics, less red tape, and you really get to see the value in helping people in need. Certainly people in a disaster zone like this need that assistance, and it is very rewarding to provide that service and give back. It’s what I’ve been trained for.”

This will be Chin’s fifth relief mission, having been deployed three times to Haiti in the wake of that country’s devastating earthquake in 2010, and once to Pakistan to provide assistance after that nation’s flooding in 2010. He and his team will remain in the Philippines until Dec. 9. He explained that missions are usually two to three weeks, but because of the time required to travel so far, it seemed reasonable to extend this mission a bit longer.

Chin first became interested in medical disaster-relief work during his residency in emergency medicine. Another physician who was going to Haiti to provide earthquake relief mentioned that CMAT was still sending teams. Chin quickly got in touch with CMAT himself and shipped out for Haiti as well. The experience was so meaningful to him that he increased his involvement with CMAT—he is now a board member for the organization as well as response co-ordinator—and obtained a European Master in Disaster Medicine.

“The problems you have on the ground there are much different than what you see here—the problems of not having a system around you because it’s been devastated by environmental conditions,” said Chin of medicine in a disaster zone. “The challenges are different, but at the end of the day, whether working at home or working there, you’re helping people. And that is the most important part.”