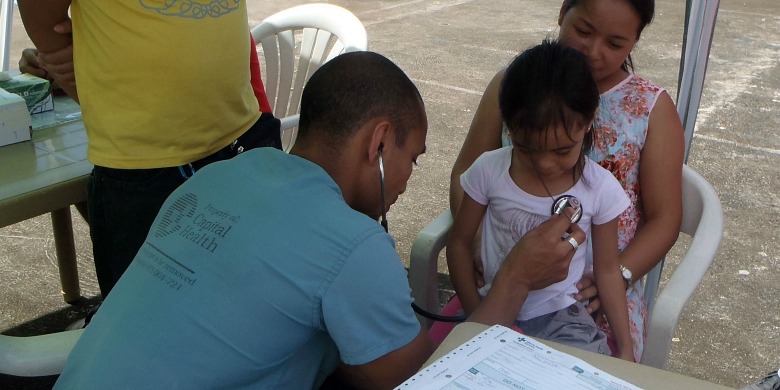 Rashad Chin treats a young patient during his three-week emergency relief mission to the Philippines.

By FACULTY OF MEDICINE AND DENTISTRY

When Typhoon Haiyan hit the coast of the Philippines, millions of people instantly felt the effects. Homes and lives were swept away in the storm, people went missing, and many died. A country and its people were left reeling in the aftermath of the most violent tropical storm ever to make landfall.

Within two weeks of impact, Rashad Chin landed in Cebu City, Philippines, as part of the first response team deployed by Canadian Medical Assistance Teams. The devastation was all-encompassing: homes were reduced to rubble, hospitals were inaccessible and thousands of people desperately required medical attention.

“When you see the devastation, you realize there are so many more patients that need to be seen and there’s nowhere for them to be treated,” said Chin, a clinical faculty member in the University of Alberta's Faculty of Medicine & Dentistry. This was Chin’s fifth deployment with CMAT.

When Chin arrived in Cebu City, only one of the five local hospitals was able to treat patients. The health-care professionals were exhausted—many of them stayed on shift for days at a time. Despite their efforts, relatively few people had been treated. Rural health services were virtually non-existent.

The first course of action was to create a field clinic in the city. The setup was basic but effective: between 80 and 140 patients passed through the clinic each day of Chin’s three-week mission. Trucks packed with supplies and health-care professionals went to serve people in rural areas who were unable to travel to the city for medical attention.

A powerful moment for Chin was treating a child with an infection. Based on the size of the infection, Chin believes it had been building for a long time. He was able to drain it and the child’s pain lessened almost immediately.

“It does move you, knowing that a child was suffering for that long and, if we hadn’t been there, would be suffering for even longer,” Chin said.

“People are concerned about shelter, their homes, feeding their children, finding evacuation centres or even finding the food drops. They neglect wounds and they neglect infections to survive.”

The resilience of the locals is clear. When Chin arrived, neighbours had already banded together to begin the lengthy process of rebuilding their homes. By the end of his deployment, three more hospitals had opened their doors to patients. Improvements are made each day thanks to support from local governments and international relief organizations like CMAT, but there is still much that needs to be done, he says.

“Everybody comes together to help when a population has been affected like this. They really are survivors and you can see that. With a little bit of help, the world comes together.”