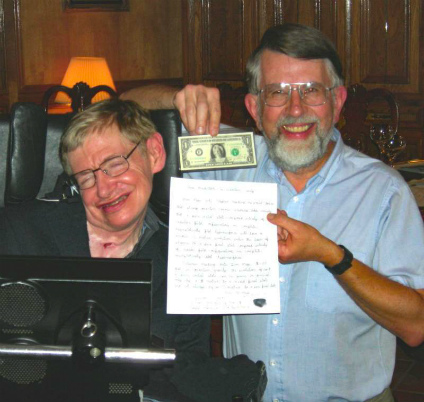 Don Page holds the Marilyn Monroe dollar bill he won from Stephen Hawking in 2007 in a bet over whether information that disappears into black holes is lost forever. (Photo courtesy Don Page)

Don Page, who earned his PhD under Hawking’s supervision, recalls the greatest influence of his career delving into the secrets of the universe. 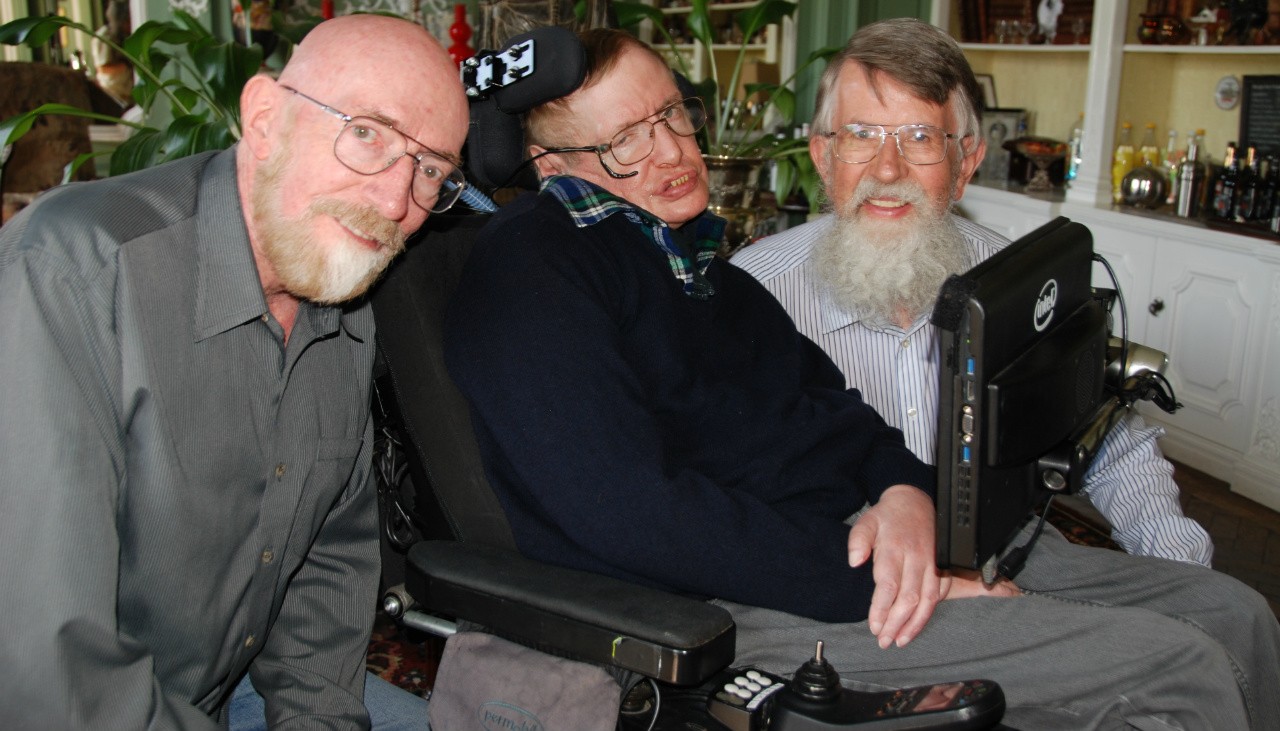 Stephen Hawking co-supervised Don Page as he earned his PhD at Caltech in 1976. The two struck a friendship that endured as they worked together on numerous publications in the decades that followed.

Over the years, several of which they spent living together, Page came to understand Hawking on a deeper level as the two contemplated how to create simple laws to make sense of complex quantum cosmology. Though they published many papers together, Page also refuted three major claims by Hawking and famously won a bet against his mentor in 2007, when Page challenged Hawking’s assertion that information that falls into a black hole is lost forever.

While the two had many scientific disagreements over the years, they agreed that there was no better way to live life than attempting to solve the greatest mysteries in the universe. Their partnership will forever live on for students of the universe in the famous Hawking-Page transition in black-hole thermodynamics.

Q: How did Professor Hawking influence your path as a scientist?

Stephen Hawking had the greatest influence of any person on my career in physics. He was an outstanding example of a scientist and an excellent mentor. Seeing how he got to the heart of a matter was a great inspiration to me as well as his enormous courage in the face of adversity. We wrote a total of eight papers together, and his ideas have stimulated dozens of other papers I have written, 10 of which have "Hawking" in the title.

Q: What was it like being supervised as a graduate student by one of the world's best scientific minds?

My main PhD supervisor was Kip Thorne (Nobel Laureate 2017), but Stephen Hawking was my co-supervisor during the 1974-75 year that he spent at Caltech. He and I would discuss the physics of a problem, I would do the mathematical calculations, and he would dictate the paper to me. In those days I wrote it out in longhand, and a secretary would type it up.

Q: Can you describe your first meeting?

I don't remember precisely what happened at our first meeting at Caltech in the early autumn of 1974, but I remember I had been warned that his voice was hard to understand, and that it would take about a week to understand him, so I probably did not understand much of what he said the first day. I was encouraged by the fact that I could understand a fair fraction after only three days, but then disappointed that I could not fully understand after a week.

Q: What is your favourite memory of working and living with Professor Hawking?

Perhaps my favourite memory was when Paul Dirac—discoverer of the equation for the electron that also predicted the existence of antimatter—and his wife Margit—the sister of physicist Eugene Wigner—came to visit Stephen Hawking and his wife Jane one Sunday afternoon after flying in from Florida, where Dirac worked at the time. We conversed while sitting out in the garden behind the Hawkings' home in Cambridge. Margit Dirac said that on the flight from Florida, "They packed us in like sardines." Paul Dirac responded, "They don't pack sardines that way anymore."

Later Jane and Margit went into the house to get some more tea, and I was left sitting with two of the most famous physicists of the 20th century, neither of whom was saying anything—Stephen Hawking because it was difficult for him to speak and Paul Dirac because he was known to be very taciturn. To break the ice, I asked, "Professor Dirac, what are you working on now?" He mumbled something I did not understand and then said, "Did you know that Olivia Newton-John is the granddaughter of Max Born?” Born was a German physicist and 1954 Nobel Laureate for his fundamental research in quantum mechanics, especially in the statistical interpretation of the wave function, and Olivia Newton-John is of course the English-Australian singer, songwriter, actress, entrepreneur and activist.

Q: Beyond his scientific contributions, how important was Professor Hawking's contribution to science communication and elevating the stature and awareness of the importance of science in society?

In 1988, Hawking published A Brief History of Time: From the Big Bang to Black Holes, which sold more than 10 million copies in 20 years, one of the top bestsellers of popular science. This made the work of Hawking and others in his area of theoretical gravitational physics very well known and no doubt stimulated many young people to go into science.

Q: Do you still have that dollar bill from the bet you won in 2007?

Yes. Stephen paid off a scientific bet he made with me by a dollar bill that was actually not genuine, but I treasure it even more, since it was one that on its face did not have a picture of George Washington but rather of Marilyn Monroe, whom Stephen admired for being "a model of the universe."