Canada is clearly at the forefront of the neutrino physics field.

Connections between the University of Alberta and Canada's newest Nobel laureate run deep. 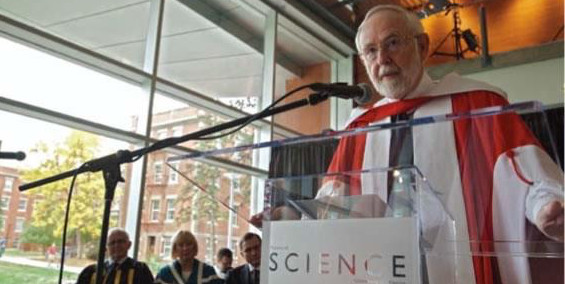 The connections between the University of Alberta and Canada’s newest Nobel laureate run deep.

Arthur McDonald, who was named co-recipient of the Nobel Prize in Physics this morning, received an honorary degree from the U of A in 2011, and helped officially open the Centennial Centre for Interdisciplinary Science. And three members of the team McDonald worked with on the project that ultimately led to the Nobel Prize—Darren Grant, Aksel Hallin and Carsten Krauss—have since gone on to become U of A faculty members.

“Art is a truly gifted researcher and leader,” says Darren Grant, associate professor in the Department of Physics and Canada Research Chair in Astroparticle Physics. “In particular, he has been an incredible mentor to the young people of the SNO collaboration like me, and has shaped our careers.”

“Art is a very smart and effective physicist, but also an exceptional people person who understands the necessity of a great collaboration,” says Aksel Hallin, professor in the physics department and Canada Research Chair in Astroparticle Physics. “He spent a lot of time building the collaboration and pulling people together.

“It is wonderful that SNO has led to a Canadian Nobel Prize in Physics—one where the lab and the experiment were designed and built in Canada, led by a Canadian, and conducted by an international collaboration with very significant Canadian funding,” says Hallin. “Canada is clearly at the forefront of the neutrino physics field.”

SNO was an experiment carried out at the Sudbury Neutrino Observatory that found indications of mass in neutrinos, subatomic particles that were long theorized to contain no mass.

McDonald’s work has propelled Canada onto the world stage of particle astrophysics through the innovative collaboration at the SNOLAB Institute. His three former team members, Hallin, Krauss, and Grant, say they were influenced not only by McDonald’s scientific expertise, but also by his personal conduct.

“Art is a true gentleman who has an incredible gift of solving complicated scientific arguments by not only his superior intellect but also his mediation skills,” says Krauss, associate professor of astroparticle physics and director of the U of A’s Centre for Particle Physics. “Everyone who works with him realizes what an outstanding individual he is.”

“Carsten, Darren, and I all continue to work with SNOLAB and with Art on the next generation of experiments,” says Hallin of two current SNOLAB-based collaborations, SNO+ and DEAP. “These ongoing collaborations speak to the University of Alberta’s leadership in astroparticle physics.”