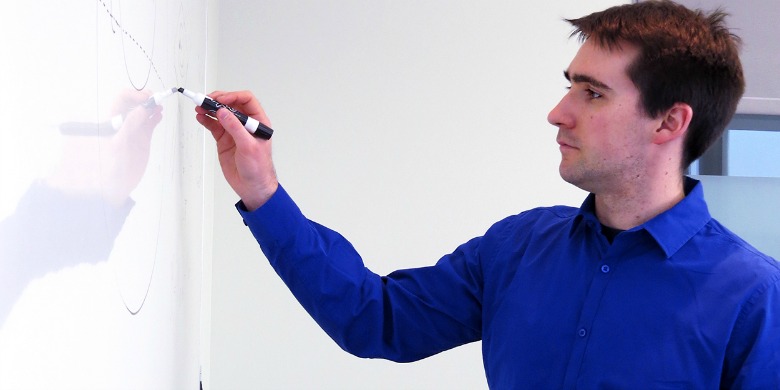 130122-jacobburgess-banner
Jacob Burgess is part of a UAlberta physics team whose breakthrough provides the key to a century-old scientific challenge. (Photo: Kristy Condon)

(Edmonton) Thanks to the tenacity of star physics students and the new tools of nanotechnology, a University of Alberta physics team has cracked the code to a magnetic mystery that scientists have been trying to solve for nearly 100 years.

U of A graduate students Jacob Burgess and Alastair Fraser made the breakthrough while working with Mark Freeman, a U of A physics professor and researcher at the National Institute for Nanotechnology, who led the new study. Their research, which builds on key contributions from John Davis in the physics department and Doug Vick at NINT, makes it possible to finally harness a phenomenon known as the Barkhausen effect with a new kind of high-resolution microscopy of magnetic materials.

“I call this new tool a ‘scanning vortex probe microscope’ after the special magnetization pattern we used to make this discovery,” explained Burgess, author of the theory and the model that revealed Barkhausen’s elusive secret.

The Barkhausen effect is named for Heinrich Barkhausen, who offered science a seminal experiment in 1919 that provided the first evidence of magnetic domains—the quilt-like patterns in the orientation of "magnetization" within magnetic materials. Barkhausen made the discovery by listening in on magnetic activity by wrapping a magnet with an electrical coil connected to a speaker. The messages Barkhausen received were intermittent, idiosyncratic and impossible to translate—until now.

Watch video: The science behind the breakthrough

“Barkhausen’s findings were very important for advancing our understanding of magnetism and for eventually using magnetic materials in applications like data storage,” says Freeman. “But the intricate details have proven surprisingly difficult to measure. In fact, the vague picture we’ve been working from has come to more perfectly represent what we don’t know.”

The new findings, published online Jan. 17 in the journal Science, represent a game changer because magnetic thin films are critical in modern computing for storing the information in every hard disk inside every computer. With this discovery comes the potential to provide critical information for magnetic computation technology that can be designed to replace hard drives, making it possible to engineer data storage that is so secure, it would preserve data even if the computer crashed.

Burgess credits the university and the science faculty for giving him the knowledge and skills to succeed. “As a U of A science student, I've had the opportunity to learn about everything from nanofabrication to quantum field theory to machining—and most importantly, I got to learn from people who were teaching the material they loved.”

The work was supported by the Natural Sciences and Engineering Research Council (Discovery Grant and Discovery Accelerator Supplement), the Canadian Institute for Advanced Research (Nanoelectronics Program), the Canada Research Chairs program,  the informatics Circle of Research Excellence, the National Institute for Nanotechnology, and Alberta Ingenuity and NSERC scholarships to Burgess.