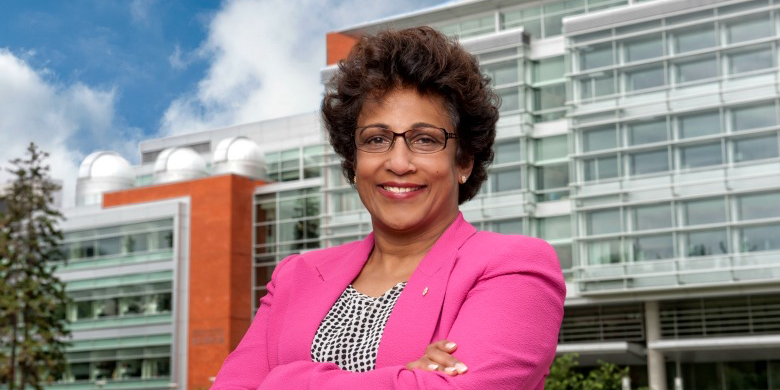 (Edmonton) University of Alberta President Indira Samarasekera’s association with the University of British Columbia has come full circle, as it was announced March 6 that she is to receive this year’s UBC Engineering Lifetime Achievement Award.

“I am thrilled to receive this award,” said Samarasekera, who came to the U of A in 2005 as president and vice-chancellor. “I owe so much of my success to my time as a student, faculty member and administrator at UBC. It is both gratifying and humbling to join the other distinguished alumni winners of this award and be recognized with such an honour."

After earning her master’s in science in 1976 from the University of California, Samarasekera attended UBC, where in 1980 she completed a PhD in metallurgical engineering and later entered the professoriate. While at UBC she held the Dofasco Chair in Advanced Steel Processing and also served as vice-president of research.

As the U of A’s 12th president, Samarasekera began her presidency by renewing the U of A's vision and mission as outlined in the university's Dare to Discover document. With a clear vision in place, Samarasekera spent the next decade facilitating the expansion of the university's reach globally; championing unprecedented growth of faculty, programs, international partnerships and facilities (more than $2 billion in capital projects); overseeing the billowing of the university's endowment past the $1-billion mark; and guiding a surge in reputation that places the U of A among the top five universities nationally and top 100 internationally.

Samarasekera’s contributions to research—specifically to heat transfer and stress analysis of materials—led to numerous awards and honours, as well as the adoption of her work in countries and industries around the world.

The lifetime achievement award is the latest accolade in a career that includes a Fulbright-Hays Scholarship, the E.W.R. Steacie Memorial Fellowship in 1991—awarded by the Natural Sciences and Engineering Research Council of Canada to the top four researchers under 40—and an appointment as an officer of the Order of Canada in 2002. In 2012, she received a Queen Elizabeth II Diamond Jubilee Medal and the Public Policy Forum's Peter Lougheed Award for leadership in public policy.

Samarasekera joins U of A chancellor emeritus and current special adviser to the provost Eric Newell as a UBC Engineering Lifetime Award recipient. Newell, a U of A honorary degree recipient (2002), graduated from UBC in 1967 with a bachelor of applied science in chemical engineering.

Samarasekera will receive the award April 9 at a ceremony in Vancouver.