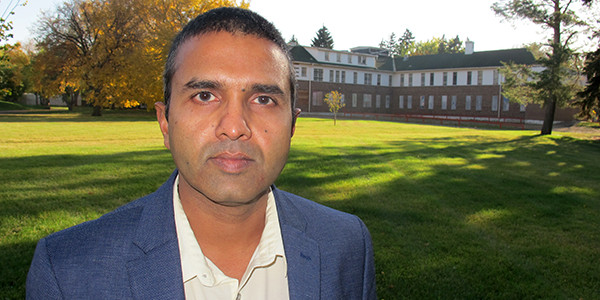 Eighteen years after leaving his home in India to begin a medical residency in England, Vinesh Gupta still remembers the loneliness and struggles of adjusting to a new life in a new country.

“The first month, all I could think of was going back,” says Gupta, the division director of child and adolescent psychiatry at the University of Alberta’s Faculty of Medicine & Dentistry. “It was that isolation. It was trying to settle into a new culture. It was not knowing anyone.”

It is a stress Gupta says is commonly experienced by many new immigrants, which if not treated, can quickly leave them vulnerable to developing mental health issues. Since moving to Edmonton in 2008, the forensic child psychiatrist says he has seen a dramatic need for mental health resources in this city’s South Asian community and is now leading an effort to provide help.

Gupta is the driving force behind a new website, the South Asian Mental Health Initiative for Training and Awareness. The website is meant to serve as a one-stop shop for mental health resources targeted at Edmonton’s South Asian population—estimated at 80,000 to 100,000 people.

“We know that people who are immigrants and who are trying to settle into a new culture are more likely to have mental illness. And there is almost this inherent paranoia about talking to somebody else,” says Gupta. “Some of them feel discriminated against. Some are worried that if they are diagnosed with mental illness they might lose their job. There is also stigma. They do not want anyone to know that they have mental health issues and they do not want to accept it themselves.”

The website offers resources in English, Punjabi and Hindi. Gupta says it also begins a conversation in an effort to dispel common myths about mental health.

With the website as a starting point, Gupta is seeking additional ways to expand his efforts. He has started speaking about mental health issues at local temples in a bid to raise awareness. Gupta has also organized a group of health professionals who share his concerns—among them, psychiatrists, physicians, social workers, nurses and psychologists. Each month they meet to discuss what more can be done to address mental health issues in Edmonton’s South Asian population.

As a group, they are working on a plan to one day open a centre in southeast Edmonton offering a variety of health services to South Asian patients. The aim is to give them the resources they need in a single location, while eliminating many of the patients’ concerns about seeking help for mental health.

“The philosophy we’re trying to base this on is that it’s about easy access, language and dealing with stigma,” says Gupta. “If you’re walking into an office where there’s a general practitioner, a nurse, a social worker, a dietitian and a psychiatrist, you don’t have to worry if someone will see you going into the building and thinking to themselves, ‘They are crazy.’

“The biggest need is just raising awareness that these are mental health issues that can affect everyone. There is almost a belief that mental illness is a white man’s problem, not ours. But it’s not like that. It is like diabetes, it is like cancer, it is like any other illness that can affect anyone. It does not discriminate between age, gender or race.”