Education professors step up to rebuild teaching capacity in a country emerging from decades of civil war. 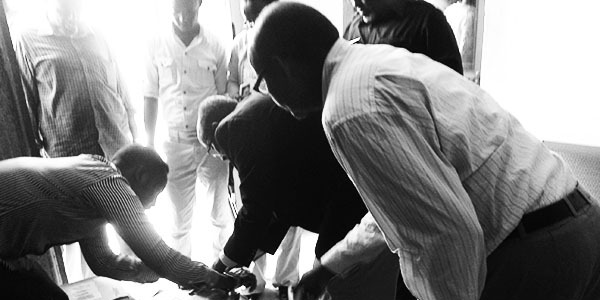 Staff at Somali National University unload a shipment of books from the University of Alberta.

(Edmonton) Before the civil war, Somali National University (SNU) was a thriving institution of higher learning, with 15,000 students, 700 staff members and 13 departments. Its alumni included the current president of the country, notable scientists, peace activists, humanitarians and dignitaries.

“It was a very fine university,” says Ali Abdi, a Somali expat and University of Alberta education professor. “Everything was going well.” But when the war erupted in the early 1990s, killing thousands and destroying much of the country’s infrastructure, SNU was badly damaged. In 1991, its operations were suspended indefinitely.

The future of the institution remained bleak for more than two decades as conflict continued to grip the East African nation, but now peace is finally getting a foothold. In November 2013, the government announced that SNU would be revived. The initiative is expected to cost US$3.6 million.

The U of A’s Faculty of Education has stepped up to help with the efforts. In 2013, Mohamed Jimale—a former leader in Edmonton’s Somali community and now SNU’s rector—connected with Abdi about a potential collaboration between the two institutions.

“He wanted to know if we could help re-establish the Faculty of Education at SNU,” says Abdi, who is also co-director of the Centre for Global Citizenship Education and Research. “It’s one of the first faculties they want to create because it’s critical to building teaching capacity in Somalia.” At the moment, most Somali citizens have no education at all, and any teachers that still remain in the country haven’t set foot in a classroom for decades.

Since connecting with Abdi, Jimale has visited the U of A on two occasions to meet with faculty members, including Abdi and George Richardson, associate dean of international initiatives. “He identified some of the needs SNU has in the Faculty of Education,” says Richardson. “One of those direct needs is resources, particularly books for the rebuilding of the library.”

Richardson has been working with faculty members to gather up-to-date academic books to send to Somalia. In early March, the faculty mailed 400 books to SNU via the international courier DHL, the only mail provider currently serving the country.

SNU is also in dire need of training for future university instructors, and the U of A is stepping up to help meet this need as well.

“What we’re trying to do is offer a series of professional development seminars,” says Richardson. Because SNU is being rebuilt, and there is still some lingering conflict, these sessions will probably happen in Nairobi, across the border in Kenya. U of A faculty members will donate their skills and time on the ground, because online training would require technological infrastructure that’s sorely lacking in this geographical zone.

Richardson isn’t sure yet when the training sessions will be held. However, the faculty is collaborating with UNESCO and SNU’s new dean of education, a U of A alumna named Fouzia Warsame, to make this happen.

It’s a big project, but the Faculty of Education isn’t new to this kind of partnership. For about seven years, the faculty helped several Iraqi institutions rebuild after the war. Faculty members have also worked on projects in South Africa, Tanzania and several other East African countries.

“The faculty has a long history of international development work and a lot of people who are passionate about working in the developing world and sharing their expertise,” Richardson says. “In the broadest sense, we see it as tied to our mandate and the idea of global citizenship.”

And although the initiative is philanthropic, U of A faculty and students also benefit, says Richardson: “It broadens our knowledge of the world.”